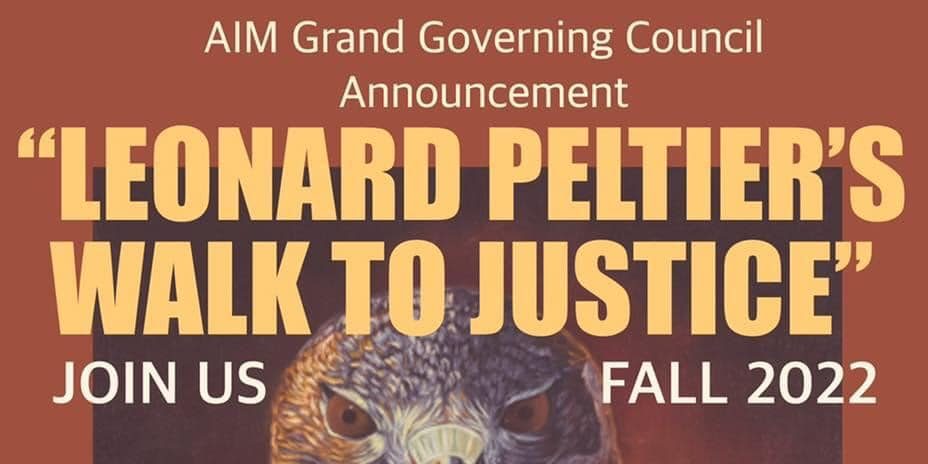 “Leonard Peltier’s Walk to Justice” will start in Minneapolis and end in Washington, D.C., where organizers plan to meet with government officials to demand the release of Peltier from the U.S. federal prison system.

“The vision and prayer for this walk—Leonard Peltier’s Walk to Justice—began almost two years ago through dreams,” said American Indian Movement of Indiana and Kentucky Chapter Director Rachel Thunder to Native News Online. “We, AIMGGC, knew we had to move in a big way to see Elder Leonard Peltier released.”

Peltier has been in prison since April 1977, when he was convicted by a federal jury in Fargo, N.D., for the killing of two FBI agents on the Pine Ridge Indian Reservation in South Dakota. He is considered by many as America’s political prisoner. He’s been eligible for parole since 1993, for 29 years. The Supreme Court has twice denied his petitions for a rehearing.

There have been several walks for Leonard Peltier over the past decades, including the Leonard Peltier Walk for Human Rights in 2011 and the Walk for Justice in 1994. Those two walks were cross-country, starting in California and trekking all the way to Washington, D.C., demanding freedom for Peltier.

Organizers say that the walk will be prayerful and anyone can join. In a letter to President Joseph Biden, dated January 4, the AIMGGC said, “Until Elder Leonard Peltier, AIM human rights defender, is released, we will continue to push this injustice on a worldwide platform and hold accountability to the U.S. Government and your administration.”

For more information on the walk, including how to get involved, visit the walk’s Facebook page.