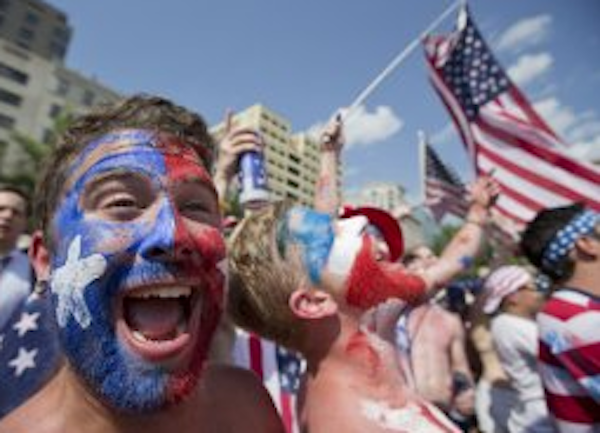 It’s Candidate Smith by a Landslide

July 4, 1776: In the shadow of the hangman’s noose the signers of the Declaration of Independence ended their document that would change the world with these words — “we mutually pledge to each other our Lives, our Fortunes and our Sacred Honor.”

July 4, 2014: In a different but no less significant crisis, the American people are being summoned to reclaim that first Revolution.

The challenge of this moment is to redeem the promise of America, to revitalize the American Dream and to restore the People’s rightful place as the sovereign rulers of America. Let’s be blunt: America is in trouble. We are in danger of losing the American dream. That’s not just the opinion of the three of us. It’s the conviction of most Americans.

Over the past six months, we have conducted an intense national research project among likely voters of all parties, and we are releasing the results now, for Independence Day, 2014.

The battle lines of the new political order are emerging. When presented with the proposition that “the real struggle for America is not between Democrats and Republicans but mainstream America and the ruling political elites,” over 66% of voters agree.

What we’ve found is that the old “conservative vs. liberal” political discussion is being tuned out by the vast majority of voters. These voters aren’t liberal or conservative. They are unified in frustration with the corruption of the political ruling class: incumbent politicians, lobbyists, the elite media, big business, big banks, big unions, and big special interests .

American voters strongly believe that corruption and crony capitalism are among the most important issues facing our nation — almost equal to jobs and the economy. Political alienation has existed for decades, but it now envelops over three-fifths of all voters.

These are the numbers that precede a political upheaval.

This is not a Democratic movement or a Republican movement. It is an effort to give voice to the vast majority of Americans who are ready to rumble and rebel:

And what do they want to do about this?

All of this is occurring in a context in which voters believe that the American dream is fading, and in which two-thirds believe their children will not have a future better than our present.

Our movement, “WeNeedSmith.com,” is named after the hypothetical “Candidate Smith” we created to stand against status quo political corruption and stand for a reform-first platform. Of course, we chose “Candidate Smith” in recognition of the hero, Thomas Jefferson Smith, of Frank Capra’s classic film, Mr. Smith Goes to Washington.

The WeNeedSmith.com Web site we are launching today is a gathering place for Americans who desperately want to reclaim their right to be the true rulers of American government: people who are willing to act as citizens willing to commit to a reform platform and who are willing to take on the corrupt and self-serving political class.

In our research we presented this position:

After delivering this description, we presented Smith’s non-partisan “reform first” and “issue principles” platform. The very voters who have been divided and distracted for years by single-issue politics voted for the Smith comprehensive reform program with near unanimity. Despite all the conventional wisdom about how hopelessly divided America is, the larger truth is that an overwhelming majority of Americans unify around alienation, the issue platform of Smith and the “reform first” package. This is a movement that unites rather than divides.

In our massive research project, upon hearing the Smith platform, the favorability of Candidate Smith skyrocketed, as did Smith’s vote support at every level. While the political elites have purposely divided our nation, Smith unites, winning with men and women, every age group, every education and income demographic, and wins whether running as a Democrat, Independent, or Republican. A large majority of voters endorsed the notion that the real ideology of this country is “American common sense.”

Frankly, in over forty years of public opinion research, we have never seen results so startling, so consistent at such stratospheric levels of agreement. Our polling is prima facie evidence of a nation in revolt against a corrupt system, even as it is now unrecognized or unacknowledged by the political class. By every measure we have of alienation, of optimism vs. pessimism, and of the mainstream vs. the political class, our poll data reflects intense disdain for and anger toward the political order in America: Smith is coming, one way or the other.

The disaffection of American voters with the status quo in Washington is not ideological, but structural. Clearly, the public is not looking to merely tinker with the political process, or to simply to swing from the current crop of Democrats to the current crop of Republicans. The difference between today’s political structure and the aspirations of Americans is a vision of alternate universes. One is the status quo of the political, media, and establishment elite. The other universe is that of the American people, who demand transformation of the nation’s political life, a radical resetting of values to bring about a resurgence of their own sovereignty and of America itself.

That’s why we have created the “We Need Smith” movement and launched the WeNeedSmith.com website. Its most important communication to American citizens fed up with Washington’s endemic corruption is, “You are not alone.” It provides millions of Americans a way to light a prairie fire at the grass roots that will sweep across our country and over Washington.
Please visit this site, and, if you agree with these simple principles of change, join with us. This may be the beginning of something truly powerful. Will it ignite the next American Revolution? We truly hope so.

Patrick Caddell has served as pollster and strategist in numerous Democratic presidential campaigns. Bob Perkins has held senior positions in the National Republican Senatorial Committee and the Republican National Committee. Scott Miller, founder of Sawyer/Miller Group and a marketing and communications consultant, has worked in both Republican and Democratic national campaigns.