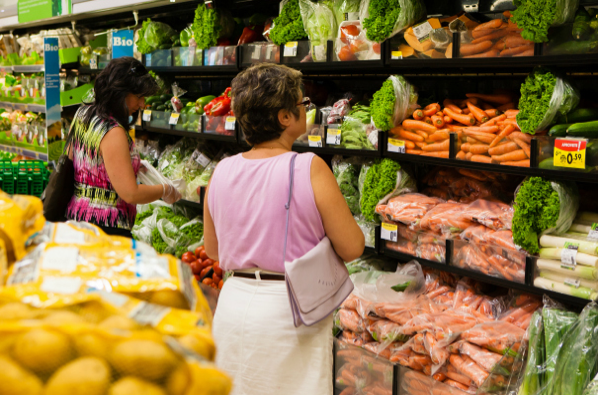 Not everyone can afford to eat their vegetables. (Mario Proenca/Bloomberg News)

Income inequality isn’t the only gap the U.S. needs to mind these days; the country is amassing a sad and expensive discrepancy between what its poor and rich eat.

America’s wealthiest people are eating better, while its poorest are eating worse, concludes a new study published this week in The Journal of the American Medical Association Internal Medicine, which measured the quality of diets among American adults between 1999 and 2010. “Socioeconomic status was associated strongly with dietary quality, and the gaps in dietary quality between higher and lower SES [socioeconomic status] widened over time.” the study said.

On the one hand, the analysis found that the American diet, on the whole, improved during the observed period. “Our study suggests that the overall dietary quality of the U.S. population steadily improved from 1999 through 2010,” the study said, suggesting that Americans are likely responding to recent nutrition education efforts. That’s consistent with a number of macroeconomic food trends, including America’s shift away from soda.

But that improvement, however encouraging, doesn’t appear to be happening society-wide. Americans in the top socioeconomic tier are leading the charge while Americans in the bottom tier are being left behind. The authors divided the population into three distinct socioeconomic tiers, accounting for both years of education and income level.  They also developed a metric called The Alternate Healthy Eating Index, which incorporates the latest scientific evidence on the relationship between diet and health and assigns values to certain foods based on their relative nutritional value (sugar-sweetened juices, for instance, have a lower rating than vegetables). Part of that divide is likely price-driven. Health foods, while growing in popularity (and fast), can be expensive, and, in turn, inaccessible to poorer people not just in America, but anywhere. “Price is a major determinant of food choice, and healthful foods generally cost more than unhealthful foods in the United States,” the study said. A significant portion of the U.S. population, after all, has enough trouble feeding itself any food, let alone fancy food—some 15 percent of the U.S. population and 17 percent of U.S. households were food “insecure” as of 2012, according to the U.S. Department of Agriculture, which means that they occasionally run out of money for food, or food entirely.

The gap is also a reflection of the growing income gap. Last year the difference in income between the country’s rich and poor was the highest in almost 80 years, according to the Pew Research Center. The financial crisis was particularly unkind to the America’s poor—inequality rose sharply across the country in its wake. Less money for those who had less money to begin with has put even more strain on dietary decision-making. The inability to, say, pay for a car could restrict one’s access to supermarkets with more healthy options.

But it’s likely knowledge-driven, too. People from lower socioeconomic tiers may have limited opportunity to learn about the effects of unhealthy foods and the consequences resultant from unhealthy diets. The study found a strong correlation between education level and performance in the health index. The median index value for those with fewer than 12 years of education was more than six points lower than it was for those who had completed college. “Nutrition knowledge, which is strongly related to education level, is likely to play a role in adoption of healthful dietary habits, and better nutrition may be a lower priority for economically disadvantaged groups,who have many other pressing needs,” the study said.

America’s growing food inequality isn’t merely affecting the poor. Diet-driven diseases like obesity and diabetes now cost the country hundred of billions of dollars every year. The federally funded Supplemental Nutrition Assistance Program alone doles out almost $80 billion per year in the form of benefits, food stamps, and vouchers—or more than $130 per month per person to the nearly 50 million Americans that are part of the program. Given the lack of comparative progress, there’s reason to believe such programs could be doing more—or that they could at least limit the purchases of “junk foods.”

No matter the cause, the gap is marginalizing a significant portion of the population. “In America, food has become the premier marker of social distinctions, that is to say—social class. It used to be clothing and fashion, but no longer, now that ‘luxury’ has become affordable and available to all,” Adam Drewnowski, an epidemiologist at the University of Washington, told Newsweek back in 2010.

There now seems to be further statistical truth to back up that claim.