Trump’s new discretionary budget will shovel 61 percent of the country’s social oxygen into the Pentagon’s fiery furnace. That’s $727 billion worth of schools, libraries, green jobs and infrastructure, housing, hospitals, nutritional support, healthcare, and other social needs that will go unmet.

As if NRA-driven gun sales, white supremacist militias, anti-woman violence, armed ICE raids, and mass incarceration weren’t enough, capitalism is now giving us another reminder of its inherent violence in the form of a big new boost to spending on the military and overseas interventions.

Trump’s new discretionary budget will shovel 61 percent of the country’s social oxygen into the Pentagon’s fiery furnace. That’s $727 billion worth of schools, libraries, green jobs and infrastructure, housing, hospitals, nutritional support, healthcare, and other social needs that will go unmet. 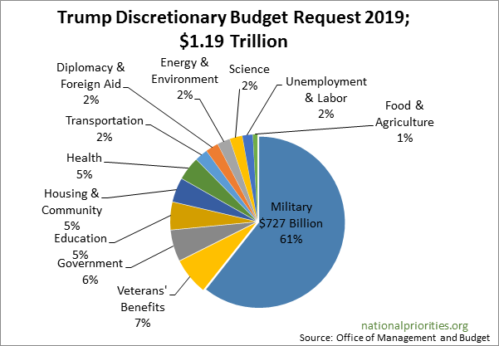 The U.S. already maintains 800+ foreign military bases in at least 80 countries around the world, mainly surrounding China and Russia—although the U.S. also maintains its fortresses on Cuba and Puerto Rico, and surrounding Venezuela.

Combatting a growing number of Chinese-invested development projects in Africa, the creation of AFRICOM in 2007 boosted U.S. military presence throughout the African continent.

This vast network of foreign military bases costs the U.S. people about $150 billion every year. Between 2001, at the start of the Afghanistan War, and 2013, private military contractors collectively raked in over $385 billion in contracts with the U.S. Department of Defense. The cost of the wars since 2001 is expected to exceed $7.9 trillion. Taken together, it’s a brain-popping high for the billionaires on Wall Street.

Modern imperialist plunder began with the Portuguese capture and enslavement of Africans and the European occupation of African ports in the mid-15th century, anchoring the transatlantic slave trade which would become integral to the colonization of the Americas. Shortly afterward, access to Chinese and Indian markets motivated Christopher Columbus’ expeditions. Driven by imperialist competition between European nations in their budding stages of capitalist industrialization, this initiated a long term process of colonial and imperialist expansion, and has reached its climax with nuclear threats concentrated on the Korean peninsula.

Beginning in 1492, after stumbling into Quisqueya/Bohío as it was locally known, Columbus and his fellow minions of the Spanish empire began setting up forts in present-day Haiti and Dominican Republic, renamed “Hispaniola” by the Spanish. From this island, the Spanish initiated the European colonization of Puerto Rico, Cuba, and the wider Caribbean—murdering, raping, and enslaving Taíno people and Africans in gold mines and plantations—and present-day Mexico, Panama, and other regions in the Americas.

In 1609, British colonists ransacked a Native North American village near the Chesapeake Bay and established Fort Algernourne. By 1785, the first U.S. foreign military base was established in Ohio on Native land—built in the shape of a pentagon. U.S. forts would continue to spread westward and into Florida, near the Caribbean, as American Indians were slaughtered and driven off their land.

During the 1798 Quasi War with France, the U.S. Navy occupied the ports of several Caribbean islands, and soon established its presence in the Mediterranean during the Barbary Wars. After the War of 1812, the U.S. Navy gained prestige and, between 1815 and 1840, patrolled the East Indies, Pacific, West Indies, Brazil, the Mediterranean, and Africa.

Beginning in 1842, the U.S. and other European powers forcibly opened up Chinese and Japanese ports. In 1846, the U.S. invaded Mexico, set up forts on the California coast, and patrolled the Pacific. By the end of the century, the U.S. was plotting the overthrow of the Kingdom of Hawai’i and, after the Spanish-American War in 1898, occupied Hawai’i, Guantanamo Bay, Puerto Rico, Guam and the Philippines. From Hawai’i, Guam, and its Naval bases in Asian ports, the U.S. launched the Philippine-American War, slaughtering 1.4 million Filipinos. From its Philippine bases, the U.S. would later invade Vietnam in the 1960s.

Extending its control into the Panamanian isthmus in 1846, the U.S. had forced Panama’s succession from Colombia by 1903. In the years leading up to World War I and World War II, the U.S. occupied the Dominican Republic, Nicaragua, Mexico, and Haiti; invaded Honduras eight times; replaced Axis airfields in South America with its own; and in 1940 obtained many of Britain’s military bases in the Caribbean and Newfoundland.

With the formation of NATO after World War II, and the transfer of many European military bases to U.S. control (some in fascist Spain included), the U.S. was in the driver’s seat of world imperialism, aggressively flanking the western border of the Soviet Union. The U.S. military also boosted its presence on China’s eastern flank when Korea was divided in half and U.S. bases and a military dictatorship were installed in the South. A massive base was also set up in Okinawa, previously annexed by Japan.

Military base construction also exploded in the Middle East, and the Cold War developed apace. The U.S. cemented its strategic alliance with the Saudi Arabian monarchy in 1945 in view of its oil reserves, began collaborating on the forced displacement of Arab peoples to create Israel as a main ally in the region, and developed its relationship with Iran under the shah. The U.S. cut ties with Iran after the Iranian revolution in 1979, and funded religious guerillas in Afghanistan, luring the Soviet Union into “the Afghan trap.”

The U.S. maintains a network of 800+ military bases in over 80 countries. (Source: Department of Defense data/QuartzMedia)

After the fall of the Soviet Union, control over the world’s oil supply became central to Rebuilding America’s Defenses, a strategy developed by the neoconservative outfit Project for a New American Century “to deter the rise of a new great-power competitor.” The policy document, developed by many figures who became leading personalities in the George W. Bush administration, identified China, North Korea, Iran, Iraq, Libya, and Syria as potential ‘rivals’.” However, the China-led Belt and Road Initiative, part of that developing country’s struggle for a multi-polar world, is posing major challenges to these objectives, increasing the ire of the U.S.

Since the disastrous Iraq War and the so-called “War on Terrorism,” the U.S. peace movement has been scattered in many different directions, but recently over 200 organizations in the U.S. and around the world have signed the unity statement of the Coalition Against U.S. Foreign Military Bases.

At a January conference in Baltimore, representatives of various organizations within the coalition presented on the history and impact of U.S. military bases around the world, with each panel focused on a different region of the world. A young people’s contingent of the coalition, Antiwar Future, was also formed.

Four major resolutions were passed in solidarity with unjustly charged Okinawan anti-base activists, against the occupation of Guantanamo Bay, and for a global conference to be held on the topic of U.S. and NATO military bases. The meeting is scheduled for this November in Ireland, where the Peace and Neutrality Alliance is resisting the U.S.’ use of the Shannon Airport as a de facto military base.

The coalition also resolved to build mass antiwar demonstrations around the country from April 14–15 calling for the closing of all the U.S.’ foreign military bases.