Amid Declining Real Wages, Strikes In US Escalate

Above Photo: Nurses in Toledo

In the midst of an intensifying political crisis in Washington and the Trump administration’s virulent attacks on immigrants, trade war measures and war threats against Iran and Venezuela, the working class in the United States is stepping up its struggle against austerity, declining living standards and social inequality.

Despite the lowest official unemployment rate in a half-century, real wages fell by 0.8 percent year-over-year in the first quarter of 2019, according to the PayScale Index. This is the fifth straight quarter of negative real wage growth.

Nominal wages—without taking inflation into account—rose by a mere 0.4 percent compared to the first quarter of 2018. Eight out of 19 job categories had below median wage growth, including transportation and manufacturing, and production jobs registered a 4.8 percent decline—minus seven percent in real terms.

While high-tech centers—Seattle, San Francisco and San Jose—saw a two-to-three percent increase in nominal wages, 13 out of 32 metro areas had increases below the national median. Charlotte, North Carolina had the worst nominal growth figure, with wages falling 0.7 percent, followed by Detroit (-0.4 percent) and Pittsburgh and Houston (-0.3 percent).

Strikes by teachers and health care workers are mounting even as the AFL-CIO and the teachers’ and health care workers’ unions seek to bottle up the class struggle by extending contract deadlines or calling impotent one-day strikes and then signing agreements that freeze real wages and increase out-of-pocket health and pension costs.

As the World Socialist Web Site reported last week, the number of major work stoppages in the US (involving at least 1,000 workers) is on pace to break last year’s total of 20 strikes and lockouts. According to unofficial estimates, there have been at least 17 such strikes so far in 2019 involving a total of at least 229,000 workers. Last year, 485,000 workers participated in major work stoppages, the highest number since 1986. Of these, more than three-quarters were teachers and other school employees, whose revolt over low pay and school funding levels has continued into 2019.

Strikes by teachers and school workers

Las Vegas -area teachers recently voted by 78 percent to authorize a strike of nearly 20,000 educators during the 2019-2020 school year if the Clark County School District makes further budget cuts. Nevada’s state government, controlled by the Democrats, who hold the governorship and have majorities in both legislative houses, has refused to increase funding for teachers, who have endured two years of pay freezes.

On Thursday, more than 1,000 Nashville, Tennessee teachers marched in Public Square to demand pay increases. This was the second sickout this month by the 5,270 teachers, who are angered by Democratic Mayor David Briley’s school funding proposal, which would raise wages by a mere three percent, even though the school board has recommended a 10 percent raise. 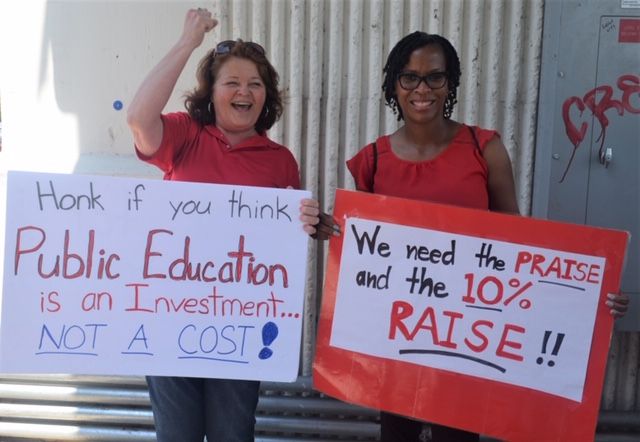 Six hundred teachers and other school employees in Union City and South Hayward, California, 30 miles south of Oakland , are set to strike Monday after contract talks broke down again on Wednesday. The New Haven Unified School District, which covers the two cities, is offering a three percent one-time bonus for the current school year and a one percent raise next year. The New Haven Teachers Association has reduced its demand from 20 percent over two years to 10 percent.

On Thursday night, the Sacramento City Teachers Association called off a one-day strike planned for May 22. On April 11, teachers in the California state capital struck for the first time in 30 years to oppose budget cuts and a threatened state takeover. These attacks will only escalate in the wake of the capitulation by the union.

This year has seen repeated clashes between teachers and the Democratic-controlled political establishment in California, which has colluded with the teacher unions to impose corporate-backed school “reform.” Earlier this year, teachers struck in Los Angeles, the nation’s second largest school district, and Oakland. In both cases, the unions blocked the struggles from expanding across the state and nationally, and then signed deals that paved the way for teacher layoffs, budget cuts and more school privatization.

In Detroit, where teachers were among the first to rebel against deteriorating school conditions in 2016, thousands of teachers, parents and students packed into a school board meeting Tuesday to protest a decade-long freeze in real wages, oversized classes and the use of standardized testing to evaluate and punish teachers.

More than 20,000 teachers in Chicago, who last struck in 2012, face a contract deadline on June 30. The Chicago Teachers Union is seeking to block a strike by calling for federal mediation.

The escalating fight by teachers is part of an international wave of strikes by educators. On Wednesday, tens of thousands of teachers and university students throughout Brazil walked out to protest against budget cuts and freezes being implemented by the fascistic president and Trump ally, Jair Bolsonaro.

Health care workers are also entering into struggle. The strike by 2,000 nurses and other hospital workers at Mercy Health St. Vincent Medical Center in Toledo, Ohiois nearing the end of its second week, with management refusing to budge on its demands for increased out-of-pocket health care costs, forced overtime and continued understaffing. The United Auto Workers union, which is the bargaining agent, has left the embattled workers isolated even though there are tens of thousands of UAW members in Toledo and nearby southeast Michigan.

An estimated 4,000 mental health clinicians at Kaiser Permanente in California have authorized the National Union of Healthcare Workers to declare an open-ended strike as early as June if no new contract has been secured.

Registered nurses at Barton Memorial Hospital in South Lake Tahoe, California, are set to hold a one-day strike on May 24, the California Nurses Association announced last week, also over staffing and compensation issues.

In Hartford, Connecticut, a strike by 2,400 workers at 20 nursing homes is set for June 3 if additional funding for pay raises is not added to the state budget, according to officials from Service Employees International Union (SEIU) 1199 New England. The SEIU called off plans to strike on May 1 after state Democrats requested more time to negotiate.

Transport Workers Union (TWU) Local 100 blocked a strike by 40,000 subway and bus workers in New York City and continued negotiations past Wednesday’s contract expiration despite acknowledging that the union is nowhere near a deal with the Metropolitan Transportation Authority.

The United Steelworkers union, a vociferous supporter of Trump’s trade war measures against China and other countries, has blocked strikes by thousands of aluminum workers in Iowa, Indiana, New York, Tennesseeand other states following the expiration of their five-year contract last Thursday. This is the first round of talks since Pittsburgh-based ALCOA was split into Arconic and Alcoa Corp. in 2016.

The USW acknowledged that Arconic is demanding a freeze in payments to the defined benefit pension system, substantial cuts in medical and drug benefits and increases in employee health care contributions, including a 60 percent increase in premiums over the three-year contract. Meanwhile, the USW and other unions continue to isolate more than 1,000 workers who have been locked out for 16 months from the ABI aluminum smelter plant in Bécancour, Quebec.

With the May 31 contract expiration quickly approaching, 1,100 auto parts workers in Saline, Michigan, west of Detroit, have voted by 97 percent to authorize the UAW to call a strike against the French conglomerate Faurecia, which bought the plant from Ford. This takes place less than four months from mid-September contract expirations for 155,000 GM, Ford and Fiat Chrysler workers, who are determined to win back concessions agreed to by the UAW in exchange for millions of dollars in bribes and other payoffs from the automakers. 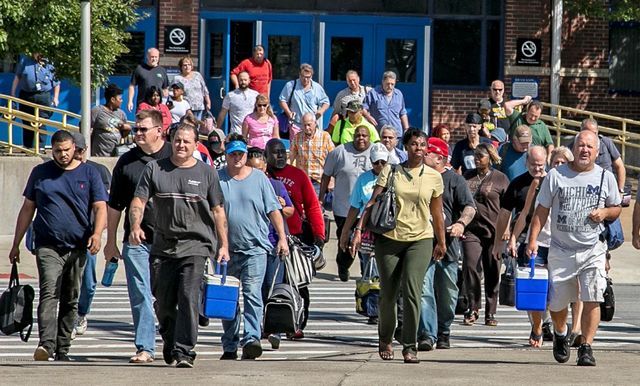 The resurgence of class struggle by American workers, along with workers around the world, is fueling popular interest in socialism. This has struck fear in the ruling class. Like capitalist governments around the world, the Democrats and Republicans in the US have responded by promoting nationalism, militarism and state repression.

To fight, workers need to establish new organizations of struggle—factory and workplace committees—that are independent of the pro-capitalist and nationalist unions to organize industrial action and link up with other sections of workers in the US and internationally. This must be combined with a new political perspective. The separate struggles of workers must be united through the preparation of a general strike to bring down the Trump government and replace it with a workers’ government based on socialist policies.