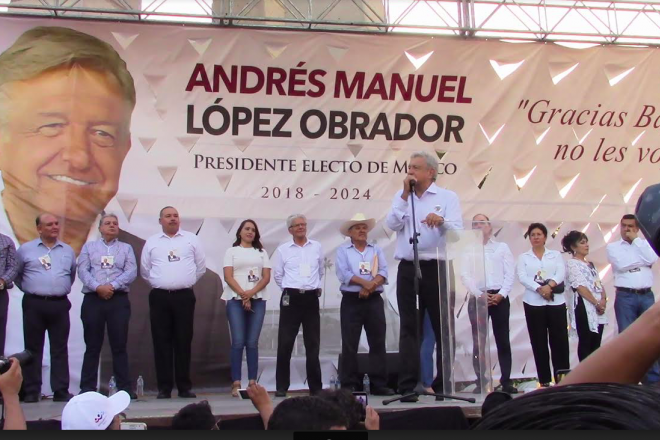 “For the good of all, the poor first” Becomes a Principle of Government

The inauguration on December 1st of Andrés Manuel López Obrador (AMLO) as Mexico’s president ends three decades of the left seeking power in Mexico. The election of AMLO, a 65-year-old former mayor of Mexico City, came with a the largest democratic mandate in Mexico’s history. Obrador won with 53% of the vote, defeating his nearest rival by 30 percentage points. He was elected not as the candidate of a traditional political party but of his own left-wing political bloc, the National Regeneration Movement, known as Morena, which he founded in 2014. Morena won a mandate with majorities in both houses of congress and also controls the mayoralty of Mexico City. He begins his his six-year term with a 66 percent favorability rating, according to the newspaper El Financiero.

When I watched the inauguration speech AMLO came across as a man prepared for the job, one who takes his responsibility to the people seriously and who has a major agenda for the politics, economy and culture of Mexico. He calls his administration the “fourth transformation” of Mexico, a term suggesting his election is as important as the revolution of 1910-20.

AMLO has been a pragmatic center left politician but he seems to be turning into a populist left political leader promising a “profound and radical” transformation. His left government comes at a time when progressive governments are under attack by oligarchs and the United States in Latin America.

He  promised to turn his longtime slogan, “For the good of all, the poor first,” into “a principle of government” starting today. He described the transformation he seeks as “profound and radical, because it will end the corruption and impunity that impede Mexico’s rebirth.” His speech put forward a blistering attack on neoliberal, free-market, pro-trade policies that Mexican governments have followed since the 1980s. He described this “neoliberal period” as “a disaster, a calamity” resulting in tepid growth, rising income inequality and the migration of impoverished workers.

He has put forward a populist agenda that responds to voters concerns on corruption, violence and an unfair economy. He began the description of his agenda focused on fighting corruption which is deeply rooted in Mexico (as it is in the United States and many countries).  This includes an agenda of 50 ideas for curbing corruption and promoting thrift in the public sector. He said he would remove governmental immunity for crimes committed by any public official, including the president and that people who buy elections will be jailed without bail.

He promised to do away with corruption and official graft criticizing the opulence and perks of government officials saying “The corruption and impunity that has impeded the rebirth of Mexico will end.” The corruption has impacted the outcomes of elections and AMLO noted this thanking outgoing President Enrique Peña Nieto, for “not intervening” in the July elections, “unlike other presidents in past elections.” AMLO ran for president in 2006 and 2012 where many thought he won both elections, but officially he was declared the loser resulting in litigation and protests.

With Peña Nieto sitting on the dias, AMLO criticized the “disaster” of the “neoliberal” economic model he pursued, along with his predecessors, on education, energy, inequality, wages and other issues. He promised to reverse those policies and provide healthcare to all, doubling monthly payments to the elderly and offering paid apprenticeships to 2.3 million young people and more. He has proposed a bill to legalize cannabis.

He is cutting his own salary by 60% and putting the pay of senior civil servants to that level. To set an example and show that public officials will not live in grandeur, AMLO will not live in Los Pinos, the presidential palace, but will first live at home, then in the National Palace downtown. Los Pinos will be transformed into a public space for cultural events and its gardens open to the public as a newly established park. He plans to sell the presidential jet and travel on commercial airlines. Another example of the austere government he has promised was his arrival at the inauguration in his simple white Volkswagen Jetta flanked by police and press motorcycles.

The day after he became president, AMLO flew to Veracruz on a commercial airliner. Obrador arrived at the Mexico City airport in his Volkswagen Jetta just after 2:00pm in the company of his small, unarmed security detail made up of just three women and two men with no police training and joined the line to board a commercial flight. During a speech to 2,000 people in Veracruz he declared “we are selling all the planes and helicopters that the corrupt politicians used,” a remark that triggered a loud roar of approval. Sixty other government planes and 70 helicopters will be sold.

On the environment, AMLO was mixed. He began emphasizing the need to increase oil and gas production and lower the cost of gasoline for Mexicans describing the mismanagement of the oil industry. He would not import crude oil but increase refining of Mexican oil, needed to pay for his economic and social programs. This will have an obviously negative impact on climate change, a topic he did not mention. However, he balanced that with a ban on fracking and a promise to increase production of wind, geothermal and solar energy. He will also plant one million hectares of fruit and wood trees to reforest for carbon capture.

On food he is banning all GMO seeds and protecting corn. He said “From Mexico originates corn, that blessed plant, and we are the nation that imports the most corn in the world.” Corn is an ancestral plant for Mexico. He wants to protect it from GMO’s, produce it in Mexico and stop importing it.

On migration, during his campaign that he would not “do the dirty work of foreign governments” in deterring Central American migrants. But in his inauguration speech he described plans to create a free trade zone along the US border as well as double the minimum wage to curb immigration. Within hours of becoming president, in his first official act, Lopez Obrador agreed with the presidents of Honduras and Guatemala, and the vice-president of El Salvador, to create a fund for “programmes, projects, and specific actions, for the sake of jobs generation and poverty fight in the region.” The goal is to make Central American nations a better place to live, thereby reduce the number of people leaving.

In his inaugural address he said he has only one group to answer to, the people, and promised that 2.5 years into his six year term the people will be given the opportunity to vote and recall him from office.  He said “Let the people decide if I stay or I go. Because the people give and the people take. I accept the challenge…. Viva Mexico!”

He demonstrated his responsiveness to the people by canceling a $13 billion airport for Mexico City that is already one-third built in response to a consulta organised by Morena, a democratic question put to the ballot, where 1% of Mexican voters took part opposing the new airport.

He has also promised a consulta  on whether the national guard should be involved in policing, which he has come to support, as well as on whether former presidents should be prosecuted for corruption, which he opposes.

Regarding the national guard, he will be asking legislators for a constitutional reform to allow for the creation of a national guard “with complete respect for human rights” to assist in maintaining public security. He has agreed to continue to use the military on the streets for crime prevention, as they have done for a decade, because of the inability of the police to deal with gangs in part due to police corruption. Morena has also proposed a bill to legalize cannabis which will undercut the illegal drug market.

His address included a promise to set up a commission to investigate the disappearance of 43 teacher trainees in 2014 in western Guerrero state. The infamous Ayotzinapa case which has become a rallying cry for human rights activists with the government suspected of being complicit in the students’ disappearance.

He promised to work 16 hours a day to turn Mexico into a “model country” with expanded growth and opportunities, converting Mexico “into an economic power” and “a more just society.”

AMLO welcomed numerous foreign leaders. He began with Vice President Pence, his wife and Ivanka Trump. He noted that his conversations with President Trump had been friendly and respectful. Getting the loudest cheers along with protest from the conservative party was Venezuela President Nicolas Maduro . Other foreign leaders included Jeremy Corbyn of the UK , Cuba’s president Miguel Diaz-Canel, and Evo Morales of Bolivia, as well as Colombia’s right-wing president Ivan Duque and Paraguay’s president Mario Abdo Benitez, among others.

AMLO has raised high expectations with his agenda for a radical, positive transformation from neoliberalism to economics that serves the necessities of the people. His agenda is a beacon of hope for many. It remains to be seen if he can keep the country unified toward his promising goals. And, if he does put this agenda in place, will the oligarchs in Mexico and the United States seek to undermine his government as has occurred in Venezuela, Nicaragua, Cuba and other Latin American countries.