…. Mistakenly considered by many as the final word on human rights worldwide, it might surprise people to know that Amnesty International is in fact one of the greatest obstacles to real human rights advocacy on Earth. In its most recent 2012 annual report (page 4, .pdf), Amnesty reiterates one of the biggest lies it routinely tells:

This is categorically false. Amnesty international is indeed funded and run by not only governments, but also immense corporate-financier interests, and is not only absolutely entwined with political ideology and economic interests, it is an essential tool used for perpetuating just such interests.

Finding financial information on Amnesty International’s website is made purposefully difficult – specifically to protect the myth that the organization is “independent.” Like any organized criminal operation, Amnesty separates compromising financial ties through a series of legal maneuvers and shell organizations. Upon Amnesty’s website it states:

Clearly then, Amnesty does take money from both governments and corporate-financier interests.

Image: Same lies, different podium. Suzanne Nossel previously of the US State Department, is now executive director of Amnesty International USA. Her primary function of dressing up aspirations of corporate-financier global hegemony as “human rights advocacy” has not changed.
….  It has been documented at great length how these issues revolve around a decades long plan devised by corporate-financier interests to divide, destroy and despoil these nations who are seen as obstacles to US global hegemony. In the case of Syria specifically, it was revealed that the current “human rights” catastrophe stems back to a malicious 2007 conspiracy documented by “New Yorker” journalist Seymour Hersh, between the US, Israel, and Saudi Arabia which sought to purposefully fund, arm, and deploy sectarian extremists to undermine and overthrow the Syrian government – thisknowing full well the human tragedy that would unfold.

Nossel’s “contributions” then are simply to dress up naked military aggression and the pursuit of global corporate-financier hegemony with the pretense of “human rights” advocacy.

A glance at AmnestyUSA.org reveals that each and every front the US State Department is currently working on and has prioritized is also coincidentally prioritized by Amnesty International. This includes rallies and campaigns to support US State Department-funded Russian opposition groups (currently fixated on “Pussy Riot“), undermining the Syrian government, toppling the government of Belarus, and supporting the Wall Street-London created Aung San Suu Kyi of Myanmar (still called by its British Imperial nomenclature of “Burma” by Suu Kyi herself).

Amnesty does indeed cover issues that are critical of US foreign policy, toward the bottom of their websites and at the back of their reports. Likewise, the corporate-media selectively reports issues that coincide with their interests while other issues are either under-reported or not reported at all. And it is precisely because Amnesty covers all issues, but selectively emphasizes those that are conducive to the interests of immense corporate-financiers that makes Amnesty one of the greatest impediments to genuine human rights advocacy on Earth. 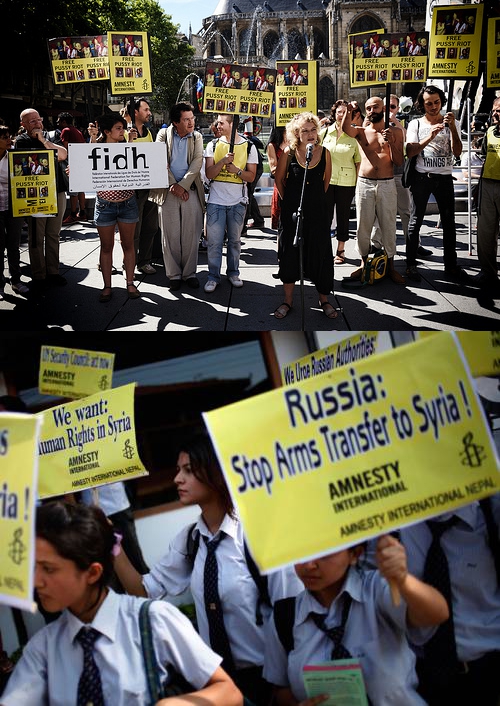 Images: Manufacturing Dissent. “Free Pussy Riot” (above). Ironically, FIDH is directly funded by the US State Department via the Neo-Con lined US National Endowment for Democracy (NED) as well as George Soros’ Open Society. “Russia: Stop Arms Transfer to Syria!” (below). If the US State Department wants it, be sure that US State Department-run Amnesty International will stage a demonstration for it – and regardless of size or legitimacy of the demonstration, expect the corporate-media to make it headline news.
….
Ordinary people are given the false impression that “someone is watching out” for human rights abuses, when in reality, all Amnesty and other organizations like it are doing, is managing public perception selectively of global human rights abuses, fabricating and/or manipulating many cases specifically to suit the agenda of large corporate-financier interests. This can be seen when entire reports out of Amnesty or Human Rights Watch consist solely of “witness reports” compiled from accounts of US-backed opposition groups.

In the rare instance that a report includes references to actual photographic, video, or documented evidence, such as Human Rights Watch’s 2011 “Descent into Chaos” (.pdf) report, deceptive language is intentionally included along with throwaway passages to enable selective reporting and spinning by not only the Western corporate media, but by a myriad of faux-NGOs funded and run by Amnesty International and Human Rights Watch’s sponsors and affiliates. The Descent into Chaos report, regarding Thailand, was promply and amply spun and manipulated by US State Department-funded faux-NGO and “rights advocate” Prachatai.

When people erroneously believe that credible organizations are handling “rights advocacy” they will not only become complacent, they will become negligent of their own responsibilities to objectively examine potential abuses and speak out against them. Wall Street and London’s corporate-financier interests have filled a void –  that should be occupied by their greatest opponents – instead with a large advocacy racket of their own creation. Not only are they given a free pass to abuse human rights globally, they’ve actually used their controlled opposition to attack their opponents.

It is clear that Amnesty International is by no means an “advocate” of human rights, but rather an affront to human rights advocacy. It goes without saying that it should be boycotted out of existence and at the very least, identified as illegitimate and fraudulent – from its funding to its compromised leadership.

Additionally, we the people must tackle real violations of each others rights at the grassroots – because it is absolute folly to believe that global spanning organizations, funded by corporate-financiers, echoing the agenda of governments driven by special interests has our best interests and rights in mind.