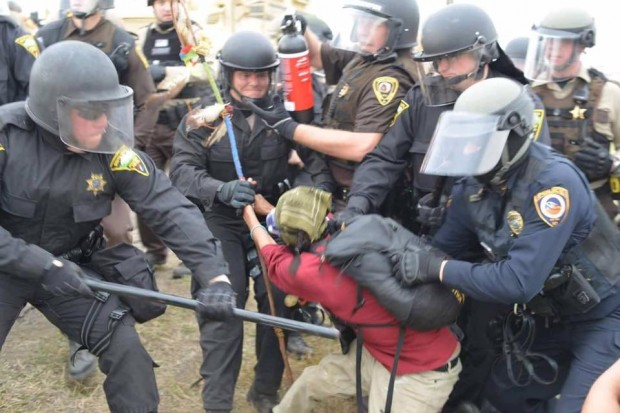 Amnesty International USA (AIUSA) has sent a team of human rights observers to monitor law enforcement response to those protesting the construction of the Dakota Access Pipeline.

The decision to send the team came in response to reports of militarized police deploying pepper spray, bean bags, and strip searches, as well as a case where improperly trained mercenaries allowed guard dogs to bite multiple protesters. The protesters – who prefer to be referred to as water protectors – have so far emphasized the importance of peaceful protesting tactics. Members of the media have also been arrested for covering the confrontations.

“Our observers are here to ensure that everyone’s human rights are protected,” said Eric Ferrero, director of communications for AIUSA. “We’re deeply concerned about what we heard during our previous visit to Standing Rock and what has been reported to us since.

“People here just want to stand up for the rights of Indigenous people and protect their natural resources. These people should not be treated like the enemy. Police must keep the peace using minimal force appropriate to the situation. Confronting men, women, and children while outfitted in gear more suited for the battlefield is a disproportionate response.”

As recently as yesterday, hundreds of officers in full riot gear deployed sonic weaponry capable of inflicting long term ear damage against the protesters before arresting them by the dozens.

AIUSA sent a delegation of observers to the area in August and has stayed in contact both with the Indigenous community and those policing the protests since then. Letters had previously been sent to the North Dakota Highway Patrol and the Morton County Sheriff’s office calling for law enforcement officers to respect international human rights standards on the policing of protests.

AIUSA has been in close contact with both the water protecters and police forces and plans to call on the Department of Justice to investigate the methods that police use to handle peaceful protesters.

Amnesty International has also monitored police action in relation to protesters in Ferguson, MO and Baltimore, MD, after the communities erupted in response to police shootings. They were also on the ground to observe protests outside the Republican and Democratic Conventions earlier this summer.