Amsterdam’s Most Beneficent Tourist Activity Is Fishing For Plastic

Have your cameras (and fishing nets) at the ready …

There’s really nothing as exhilarating as taking in the sights and sounds of Amsterdam from the water aboard a scenic canal cruise.

And in a city that champions inclusivity while boasting a concentric network of 17th century canals that spans 65 miles, there’s naturally a cruise option for everyone. And we mean everyone: romantic candlelit dinner cruises, kid-friendly cruises, foodie cruises, booze cruises, comedic cruises, cannabis-fueled cruises, cruises that serve unlimited pancakes and, last but not least, cruises that involve plucking plastic garbage from waterways.

Plastic Whale, a environmental organization describing itself as the “first professional plastic fishing company in the world,” is the operator of that last option. And what an option it is.

Popular with locals and tourists alike, Plastic Whale’s two-hour sightseeing-cum-plastic litter removal expeditions are the only cruises in town where passengers are provided with mesh nets and encouraged to actively remove things — plastic waste, specifically — from canals while simultaneous soaking in Amsterdam’s singular energy.

Just think of it as the Dutch variation of “plogging” that involves burning less calories … and life jackets.

Not your typical sightseeing excursion

In the seven years that Plastic Whale has been in operation, the company and a revolving cast of volunteer fisher-people have removed over 146,000 plastic bottles from Amsterdam’s UNESCO Heritage Site-listed canals. As of this past May, 2,194 bags of “plastic soup” have been hauled away. And in a tidy full-circle twist, the contents of these bags are being used to build Plastic Whale’s ever-growing fleet of boats. (The company also operates a recycled plastic sloop that can be found sailing Rotterdam’s bustling harbor.)

Sometimes we just can’t keep our enthusiasm bottled up!
In the past month we collected 115 bags/8085 bottles! From our office to our container, into more boats and more furniture, to raise more awareness, to use less plastic!#plasticsoup #amsterdam #recycling #circular

The more plastic that’s recovered, the more boats Plastic Whale can build and launch. The company now has a fleet of 10 vessels and plans to keep expanding with the goal to eventually go out of business due to overfishing — a “positive phenomenon” — in the canals. Plastic Whale won’t rest until there’s no plastic left to catch.

“About 80 percent of what is floating out at sea comes from cities around the world,” Plastic Whale’s founder, Marius Smit, told the Guardian earlier this year. “My conviction was that there were millions of people like me who wanted to contribute [to change that] in a positive way.”

One of Plastic Whale’s recycled plastic fishing boats is on display at a Dutch boat and water sports show in 2014. (Photo: Jeroen Jumelet/AFP/Getty Images)

While Plastic Whale is popular with tourists looking for a unique way to better the city they’re visiting, the cruises serve as a popular team-building activity for local companies and as an educational tool for school groups.

“Plastic fishing has a positive impact on kids, they love it,” Smit tells the Guardian, noting that a fifth of tours are with school groups. “As soon as they take the plastic out of the water, they see it doesn’t belong there. When we tell them that we make boats out of it, they understand it should be seen as a raw material, not as waste.”

Earlier this summer, Plastic Whale hosted special cruises in celebration of Amsterdam Pride. And based on the below Tweet, it was a runaway success. 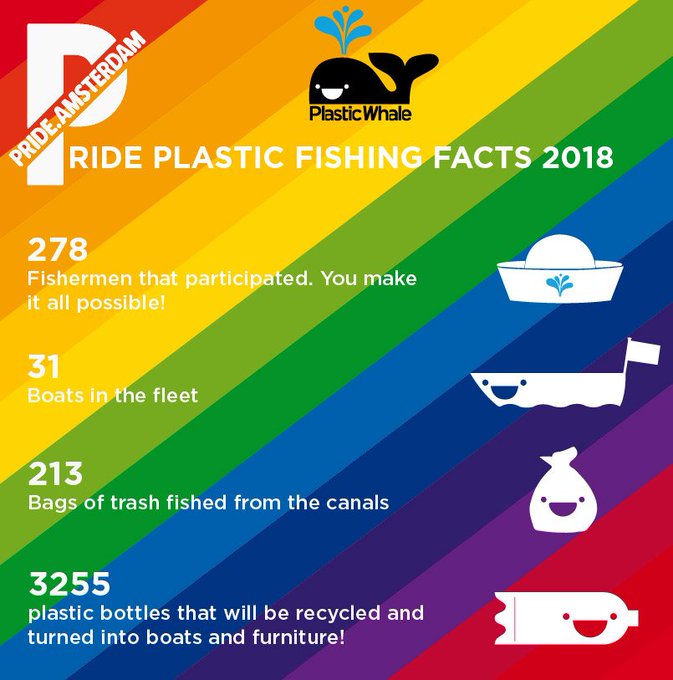 Yesterday we cleaned SO MUCH WASTE from our beautiful canals, and what a day it was! Thank you all, all 278 of you, and see you next year! #prideplasticfishing

Individual tours can be booked via Airbnb Experiences. Passengers pay $30 for the scenic litter-gathering excursion — not too shabby when compared to Amsterdam’s other canal cruises (and, of course, considering the excellent cause). Tea, water, chocolate, blankets, fishing nets and gloves are provided. It’s also worth noting that guests aren’t required to fish plastic gunk out of the canals if they don’t want to, although there’s a special prize given at the end of each voyage to whomever retrieves the “most original” object from the water.

Over 15,500 volunteers have embarked on Plastic Whale canal cruises to date.

From the depths of Amsterdam’s canals comes … office furniture

While Plastic Whale doesn’t plan on stop building and launching recycled plastic fishing boats anytime soon, the company has branched out when it comes to how it repurposes its weekly “catches.”

Working in partnership with Dutch office furniture producer Vepa, Plastic Whale recently debuted a handsome collection of high-end furnishings crafted largely from waste plastic recovered from the canals of Amsterdam along with other recycled materials. The collection includes a boardroom table, chairs, a lamp and an acoustic panel.

Ten percent of proceeds from the collection, dubbed Plastic Whale Circular Furniture, are donated to marine clean-up initiatives through the company’s charitable arm.

The ultimate inspiration behind all our designs is the oceans’ most impressive citizen, the whale. Physically unique, dignified and graceful in its movements, this awe-inspiring creature also symbolises the challenge that we are taking on. It is huge and yet extremely vulnerable to environmental damage. Just like the seas that are its home.

As reported by OZY, 14 different Dutch companies have purchased the collection for their respective office spaces since the collaboration launched. Here’s hoping there are so many new furniture orders and additional fishing boats in the pipeline that Plastic Whale is forced into early retirement.

It’s strange, of course, to wish for the early demise of such a smart and do-gooding enterprise. But in this case, if Plastic Whale goes belly up, it means the honorable mission the company first set out on in 2011 has been at long last accomplished.