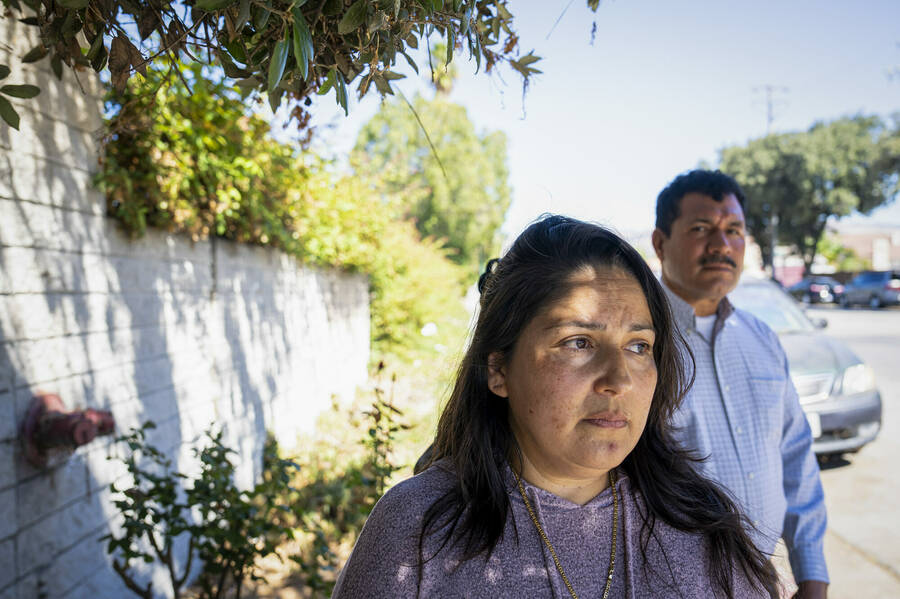 Then They All Lost Their Jobs.

Organic convenience foods brand Amy’s Kitchen maintains a carefully constructed image of ethical consumption and saving the planet, one vegan frozen burrito at a time. The company is owned by the Berliner family, and its website makes much out of being a small, family-owned business, with pictures of the founders joyfully making pot pies and surfing.

“We choose what’s best for our customers, our farmers, our employees and our planet,” the website reads. “It’s a tall order, but we wouldn’t have it any other way.”

But Amy’s has been under fire the past year as startling labor practices have come to light.

On July 18, the California-based manufacturer of organic convenience foods closed its new San Jose plant — less than a year and a half after it opened its doors; workers had been in the process of organizing with Unite Here Local 19, which represents food service and hospitality workers in the Silicon Valley.

More than 300 workers lost their jobs. Workers at another Amy’s plant — this one in Santa Rosa — organized with Teamsters Local 665. They went public in January with allegations of dangerously fast lines, lack of access to restrooms and drinking water, locked fire exits and managers who were unresponsive to safety concerns. A subsequent inspection by the California Division of Occupational Safety and Health (Cal/OSHA) found 10 minor and three major violations, including loose safety guards, resulting in $25,000 in fines. Amy’s denies the workers’ allegations and says it plans to contest the Cal/OSHA findings.

Workers at the San Jose plant had also been organizing over concerns about low wages and prohibitively expensive health insurance. After the Santa Rosa workers went public with their complaints, Amy’s management began an aggressive anti-union campaign in San Jose.

Amy’s denies that the abrupt closure of the San Jose plant in July is related to labor issues, instead citing inflation and supply chain issues. The workers themselves, however, tell a different story.

“The closure of this facility is part of the company’s overall campaign orchestrated against its workers,” said Tho Do, the organizing director for Unite Here Local 19, in a press release.

When Amy’s arrived in San Jose in 2021, the area had been hit badly by pandemic layoffs in the hospitality and food service industries. The company was easily able to attract workers, mostly Latina, to the plant.

One of these workers was Erica Naranjo, a 43-year-old mother of five who worked at the plant for a little over a year. Naranjo had lost her job during the pandemic after the restaurant where she worked closed, but she found work at the San Jose plant as a sanitation worker. The six employees on the sanitation crew are responsible for cleaning the whole plant. “[It’s] terrible work over there,” Naranjo says through a translator. Naranjo says she worked nine to 10 hours a night, five nights a week, with no overtime pay, cleaning machines, floors, garbage buckets, restrooms and offices — with little to no safety gear, despite the extremely hot water and harsh chemicals the workers were required to use. Eventually, Naranjo says she sustained burns on her hands.

The company’s family health insurance, touted in its PR materials, cost workers $9,731 a year. Naranjo, who could not afford the plan, says she instead paid hundreds of dollars for doctors’ visits out of her own pocket to treat the burns. She also called out sick for two days to recover, for which she received no pay. After those two days, Naranjo says, the company informed her that she would be fired if she didn’t return immediately. She felt she had no choice but to work through the pain of her injury.

In one reported incident, an employee in charge of overseeing the production line — a role that is close to management — screamed at and openly struck her boyfriend, a mechanic, in front of other workers. One machine worker who witnessed the incident is a survivor of domestic violence and was shaken. Some workers filed an internal written complaint with Amy’s but saythey received no response.

Another employee, Hector Guardado, also speaks of job-site bullying. One day, Guardado found another worker, Marisela, crying. When Guardado expressed concern, he says, Marisela (who also wanted only her first name printed) told him her supervisor wouldn’t allow her to go to the bathroom, that she wasn’t allowed water breaks, and that she was severely reprimanded, bewilderingly, for wearing deodorant.

Guardado says he brought a delegation to management on Marisela’s behalf, only to be fired in response— ostensibly for leaving his post during working hours, although he says he was clocked out on his lunch break. According to Guardado, Marisela was then given a piece of paper to sign that she didn’t understand; it turned out to be her own resignation letter. “They don’t care about you, how you feel, about your opinions, how you think, if you’re injured, they don’t care,” Erica Naranjo agrees. “They just want you to work. Everyone there who has a little power, they treat you like you’re nothing. Like cockroaches. “They don’t care about us.” Amy’s Kitchen did not respond to requests for comment.

Antonia Domingues Santiago and her husband, Luis Zagado Santos, say they were both injured while working at Amy’s. Santiago says she witnessed her husband, who worked on the pizza assembly line, slip and fall on piles of cheese scattered around the floor. Instead of asking if he was okay, or helping him up, his supervisors laughed at him, Santiago says. Santos was unable to get off the floor and had to take an Uber to a for profit urgent care center, Concentra—he would have had to pay out of pocket for an expensive ambulance — where he was diagnosed with injuries to his spine and head.

Santos says he had to return to the clinic five times for follow-ups, but no accommodations were made for him at work. Santiago herself was injured while lifting a heavy pallet of enchiladas onto a rack in April, she says, but was not given an appointment with Concentra until June 2022, during which time she worked without any accommodations or time off. The doctor at Concentra informed her she had an injury to a ligament and assigned a two-week limit on the weight she’d be permitted to lift — but the plant closed before the accommodation went into effect.

By this spring, the union drive at the San Jose plant was gaining momentum and many workers were interested in joining. The week of May Day, owner and CEO Andy Berliner brought a mariachi band to the plant and held a dance party, repeating that old favorite line of union-busting companies: “We’re a family.” He tried to impress upon workers the importance of “keeping things in the family.” According to Tho Do, workers were promised an upcoming raise and a bonus.

On June 1, Unite Here Local 19 filed nine complaints with the National Labor Relations Board alleging illegal retaliation against workers for organizing. The plant was closed for two weeks in July — ostensibly for cleaning and renovation — with the reopening date set for July 18. On June 4, the company held a job fair. About a half-dozen new workers were slated to start after the reopening. On July 18, workers came in for the evening shift at 2 p.m.; within an hour, they were told the plant was closing and they were losing their jobs. The laid-off workers received severance pay through September. Tho Do, with Unite Here Local 19, believes the closure “sends a message to the rest of the plants.” While Naranjo has since been able to find work as a cleaner at a hotel, she still feels distressed and discriminated against by the loss of her job.

CEO Andy Berliner says on the company website: “The truth is that the happiness of people at Amy’s keeps me going.” But for workers like Naranjo, that happiness has been elusive.