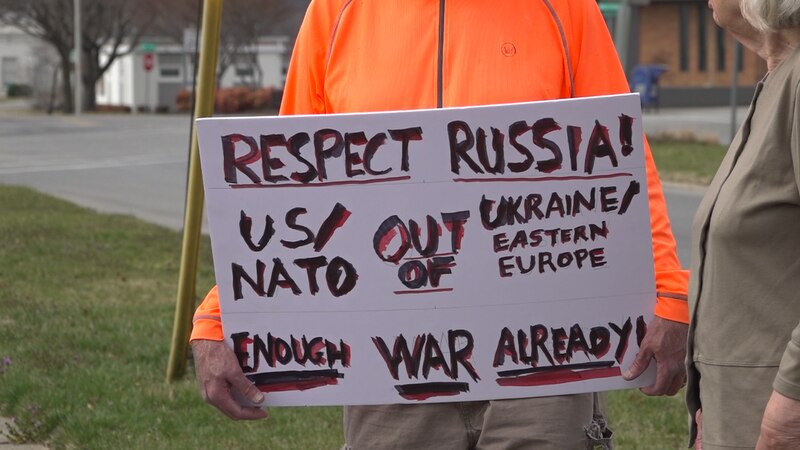 An Antidote To The ‘Split’ In The US Peace Movement: Anti-interventionism

Above photo: From WDBJ.

No more US Arms to Ukraine. End the Racist Sanctions.  Stop the Russia Bashing.

Massachusetts Peace Action, a venerable part of the US Peace Movement, has been around since the 1980s and its predecessors date back to the 1950s.  Its voice is heeded and it represents most of the shared opinions of the liberal and progressive US peace movement.

A recent piece by its Assistant Director, Brian Garvey,  provides an astute analysis of the ideological differences in the progressive part of the US peace movement and properly criticizes its inability to unite around a common program.  He asks the two crucial questions:

“How do we make a difference?”

“Making a difference” to end the war is crucial.  We in the US peace effort want to be effective. If what we do makes no difference, then we might as well watch TV, go for a walk in the woods or just stay in bed for the day.  In asking what is to be done, we must ask what is effective.  And below I consider the matter in terms of effectiveness.

To get to an answer to his two questions, Garvey divides the movement into three ideological groups.  His categorization is revealing:

“First, is the group that places all blame on Russia for the war in Ukraine..”

“Second, is a group that refuses to denounce Russia’s invasion of Ukraine.”

“The third group is a blend of the first two. It condemns Russia’s invasion… but it admits that NATO expansion set the stage.”

To Be Effective the US Peace Movement Must Focus on the US.

Tellingly, it is all about Russia!  Does it make sense for the US peace movement to be so concerned about what Russia does or fails to do?  Remember, as Garvey points out quite correctly – that the goal of the peace movement is to “make a difference.”  Do we imagine that what we say or do will “make a difference” in the inner circles of the Russian administration or Duma (parliament)?  Or have an effect on Russian elections?

On the other hand, the politicians in the US are very, very concerned about what we may think – our words do have an effect, albeit limited one.  That is the reason the US has no draft   So to “make a difference,” we ought to focus on what the United States can do now to end the war.  It seems evident that we should call on Biden to stop sending arms, materiel and “advisors” to Ukraine.  Today, now – first and foremost.  That should be at the top of our list of goals.

Some would say that the Ukraine is a proxy in a fight between the US and Russia, with the US calling on Ukrainians to fight Russia to the last Ukrainian.  In my view (full disclosure) that is absolutely correct, the goal being to set Europe against Russia to the benefit of the US.  But it does not matter whether one agrees with that view or not.  If above all else we want to stop the death and destruction of Ukrainians and Russians, if we want to be effective at ending the bloodshed ASAP, then we should work to stop the US from fueling the fire and prolonging the war with arms and advisors.

In short, stop sending US arms, materiel and advisors to Ukraine and its neighbors – NOW.

The same can be said of the US sanctions which fall most heavily on the Global South, threatening not only its energy supply but also food with expected widespread starvation to follow.  Since these sanctions have the greatest impact the people of color in the world, it is not a stretch to say they are racist.

In short, stop the racist US sanctions -NOW.

Moreover, keeping the focus on Russia takes the focus off the US and allows it to escape whatever responsibility it has for the war – and it is a rare bird in the peace community that feels the US bears no responsibility.  The focus on Russia including the McCarthyite insistence that everyone denounce Russia beefs up the narrative that makes the war possible.  This focus is in and of itself a great victory for the propagandists of war!

That leads us to the question of “condemning” Russia for the war.  Wherever one might fall in the debate, what effect does this Russia bashing have?  In terms of “making a difference” and mindful again of the fact that it is only the US not the Russians that hears us, what sort of a difference does the condemnation of Russia have?  Clearly it feeds the prowar narrative and builds more support for the war.  We do not have to take the Russian side to call for an end to the Russia bashing, and such a call should be acceptable to all those who favor peace.

Forget about Russia and a basis for unity emerges – anti-interventionism.

The calls above are not only calls for effective action.  They are calls everyone who wishes for peace can agree on -including those who fall outside the liberal/progressive camp like the Ron Paul Republicans or the Pat Buchanan traditional conservatives or paleoconservatives.

Among these calls there is no call for diplomacy, negotiations or cease fires although I agree with those suggestions.  Everyone agrees on that– with the possible exception of the Biden administration and the hawks in Congress.  The Zelensky government and the Russian government are in fact negotiating.

And what those two governments come up with is their business not ours.  For us to make suggestions to those two governments betrays a bit of hubris, even exceptionalism, that those of us living in the heart of the US Empire must watch out for.  It permeates everything here.  We are not gods pulling levers to run the world.

Once upon a time anti-interventionism, especially important for peace advocates living in the heart of the hegemonic US Empire, was a point of principle for all those who consider themselves progressives in the US.  Sadly, that is no longer the case. Let’s hope that the war in Ukraine will arouse a passion for it once again.