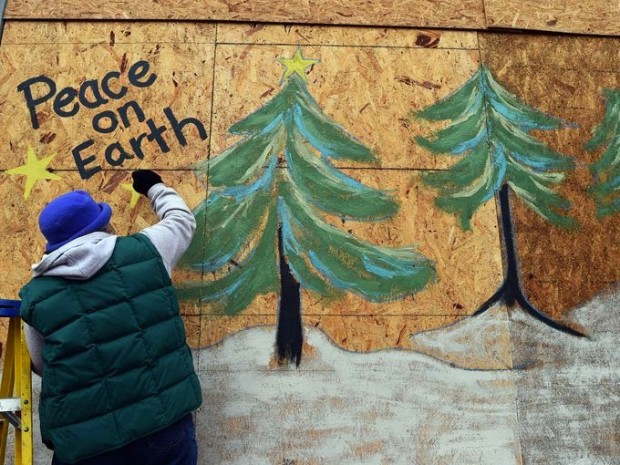 An Instructive Afternoon in Ferguson

Today two of us from Veterans for Peace went to Ferguson to see what was going on.  The town had the atmosphere of a festival along the main drag.  When we arrived cops were blocking the street near the police department (where most of the nightly protests have been held) as a large group of black motorcyclists zoomed into a parking lot nearby.

All along both sides of the downtown business strip people (predominately white) were painting the boards that are covering up windows in the store fronts and tying colorful ribbons to a fence.  I spoke to several of those painting the boards and asked if they thought things would now change in Ferguson.  All of them said yes.  I asked one white couple who owned a store about the story that blacks in Ferguson are more frequently fined for minor legal infractions.  They said that this story was not true, it was only because there are more black people in the city that it “appeared that blacks are singled” out they told me.

In 2013, the municipal court in Ferguson — a city of 21,135 people — issued 32,975 arrest warrants for nonviolent offenses, mostly driving violations. Last year, Ferguson collected $2.6 million in court fines and fees. It was the city’s second-biggest source of income of the $20 million it collected in revenues. Blacks make up 67 percent of the city’s population, but are 86 percent of motorists stopped by police. Whites make up 29 percent of the population, but 12.7 percent of vehicle stops.

A recent report says the courtroom in Ferguson gets so crowded that judges lock the doors just five minutes after court begins. Sometimes people show up late and can’t get in, so they leave. But then they’re counted as missing court, and an arrest warrant might be issued.

Jeff Smith, an assistant professor at the New School and a former Missouri state senator from St. Louis, says Ferguson “facilitates a debtors prison” because of the high number of arrest warrants that get issued when people don’t pay. When people go to jail, they sometimes lose their jobs.

That sounds like a 21st century version of Jim Crow to me.  Indentured servitude, a modern version of feudalism. When I gently challenged the white store owning couple on this they became very defensive so we moved on.

Next we came across a middle-aged white women wearing a “Don’t shoot” T-shirt standing vigil across from the police station with her two children.  I asked her what she thought about the painting of boarded up windows and she said it was all for show.  “These people never come stand here to support the black community,” she told me.  “It’s all being done to make themselves feel better,” she said.

As we talked three bus loads of National Guard troops unloaded in the parking lot behind city hall.  At that same moment an older white woman drove by and screamed at the T-shirted woman who was standing next to me with her hands in the air.  The angry white driver stopped her car and yelled “Stop holding your hands up!”

Before leaving we drove to another part of Ferguson where some of the local stores had been burned down.  As we approached the area we noticed many TV crews and lots of cop cars.  Then we saw a march organized by the NAACP with about 100 people heading the opposite direction in the four lane road.

One old black man I spoke with just a few doors from the police department told me he thought change would come.  “We’ve never seen protests like this in the St. Louis area before.  Now they are protesting at the shopping malls too.  The impacts on these business people is going to force some changes,” he predicted.

Everywhere I’ve been during these recent days there has been tons of police and it must be costing the greater St. Louis community a bunch of cash.  The negative impacts on local business must also be forcing the local ruling class to consider some changes.  (A Mexican restaurant owner in Ferguson told us her business has been heavily impacted by the ongoing protests.) But the brand new looking police department and municipal court building was likely built on the backs of black residents paying these outrageous “fines” over many years.  Those in power are not likely going to be eager to shut off that pipeline of easy cash anytime soon.  It’s a modern plantation system and the Michael Brown killing gave local black residents the impetus to express their pent up rage.

My first, middle, and last reflection on the painting of the boards on the windows was what I’d call a typical American reaction to such things – create a facade, a false front, an illusion, go Hollywood.  I asked several of the white folks painting the boards if doing so was not an admission that things are not really changing – after all the boards are still up in the windows and you are just trying to make the best of a bad situation.  It was when I said that that several of the folks got the most agitated with me – the only thing worse than putting up a false front in America is for someone to challenge the illusion.

Let’s all go on pretending that everything is just fine and dandy.