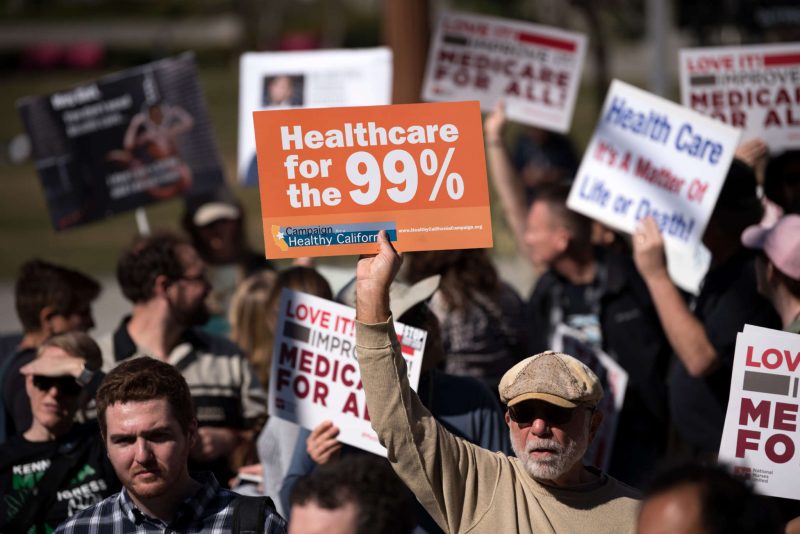 Above Photo: People demonstrate support for Medicare for All during a rally in Los Angeles, California, on February 4, 2017. Ronen Tivony / NurPhoto Via Getty Images.

In the face of massive support for Medicare for All and the failure of the U.S.’s for-profit health care system, the inevitable fall of the medical-industrial complex can be predicted, if not with precision, with certainty. Everyone is aware of the impending demise, none more so than those in charge of the for-profit health care system and their supporters in Congress, as evidenced by the frenetic activity at the Centers for Medicare and Medicaid Services (CMS) to transfer the traditional Medicare program to the insurance industry as fast as humanly possible. Given this urgency, physicians representing Physicians for a National Health Program delivered a petition signed by 13,000 individuals, including 1,500 physicians, to Health and Human Services Secretary Xavier Becerra this week demanding the end to the privatization of Medicare.

Privatization, the transfer of a public good to private, for-profit entities, is already true for over 40 percent of Medicare in the form of Medicare Advantage, private insurance plans that have been persistently and pervasively overpaid by Medicare for decades. As Kip Sullivan recently described in “Single Payer Health Care Financing,” this fraud has been going on for decades.

In 1995, the U.S. General Accounting Office (GAO) warned Congress that Medicare was overpaying Health Maintenance Organizations (HMOs), the precursors to Medicare Advantage plans, by 6 to 28 percent compared to what it would have paid had all those HMO enrollees remained in traditional Medicare because most HMOs benefited from “favorable selection,” meaning, healthier patients enrolled in HMOs. In 1999, the GAO again warned Congress that Medicare spent more on beneficiaries enrolled in HMOs than it would have had those beneficiaries been enrolled in traditional Medicare. The following year, the GAO told Congress that it was largely excess Medicare payments to HMOs, not their efficiencies, that allowed plans to attract large numbers of beneficiaries, again exceeding costs expected under the traditional program, adding billions to Medicare spending.

Twenty-six years later, in its 2021 report to Congress, the Medicare Payment Advisory Commission wrote, “The Commission estimates that Medicare currently spends 4 percent more for beneficiaries enrolled in MA [Medicare Advantage] than it spends for similar enrollees in traditional fee-for-service (FFS) Medicare.” This low number is difficult to square with the profit that insurance companies are making and the extra benefits that they offer. What has been clear to Congress for decades, is that Medicare Advantage, which inserts a middleman to “manage” care between CMS and doctors and hospitals, costs more than traditional Medicare, which does not require a middleman between the senior and the provider. From 1972 to 2004, overpayment by Medicare to HMOs was the rule and due mostly to favorable selection. After 2004, overpayment persisted for Medicare Advantage plans (formerly known as Medicare + Choice) for two reasons: favorable selection (“cherry picking,” or selecting healthy patients, as well as “lemon dropping,” or getting rid of sick patients, perfected by HMOs) and upcoding.

What is upcoding? When a doctor bills the insurance company or Medicare for a patient, the doctor uses a diagnosis code. For example, a patient who is seen for pneumonia will be billed with the diagnosis code for pneumonia. But what if instead of just billing for pneumonia, the physician also coded for shortness of breath, hypoxia (low oxygen level), productive cough and exposure to tuberculosis, some of which might or might not be accurate, but could certainly be present in someone with pneumonia? This would be upcoding and would be considered fraud, but in the Medicare Advantage world, upcoding is known as risk-score gaming, and it is perfectly legal.

Risk-score gaming is how Medicare Advantage has been drawing serious overpayments since its full implementation in 2006. Medicare Advantage does this by submitting diagnosis codes that create more CMS Hierarchical Condition Categories (HCCs) for each patient. For example, a 76-year-old female with obesity, type 2 diabetes, major depression and congestive heart failure has an HCC risk score of 1.03. For this patient, CMS pays a Medicare Advantage plan that does not upcode $9,000.

If however, the Medicare Advantage plan upcodes — same patient, same medical conditions but more codes: morbid obesity instead of obesity, diabetes with retinopathy instead of diabetes; a mild, single episode of major depression instead of unspecified major depression; chronic obstructive lung disease instead of asthma and a stage 3 ulcer instead of ulcer — her risk score jumps to 3.63, and CMS pays the Medicare Advantage plan for the same patient $32,000. The plan reaps obscene profits, some of which goes to marketing, some of which goes to improve benefits driving up the number of new members, but most of which go back into profits, all the while draining the Medicare trust fund, driving up Part B premiums (monthly payments made by beneficiaries to Medicare) and diverting taxpayer funds from other social services.

In addition to greater costs to the federal government, Medicare Advantage plans deny care for enrollees, create cost-related problems for enrollees, limit specialized care due to narrow networks (especially at the end-of-life), have worse health outcomes (including higher mortality), and unenroll high-cost beneficiaries (“lemon drop”) who are in poor health.

All evidence points against using the multibillion-dollar health insurance industry to improve outcomes and save money. But evidence is no match for profit. In 2019, the Medicare budget approached $800 billion, and by 2026, it is projected to be $1.35 trillion. This amount of taxpayer money keeps capitalists up at night, especially the medical-industrial complex types, scheming up ways to grab some for themselves. Lucky for these capitalists, CMS is continuing its march towards privatization, or what is known in the parlance of health economists, “de-risking” all of Medicare, meaning eliminating the risk of providing health insurance to seniors by having someone else bear the risk. But the truth is the exact opposite: These overpayments are allowing the insurance industry to pretend they bear risk when in fact it’s the taxpayer who is bearing risk.

There is much profit to be gained by “bearing the risk” for Medicare through favorable selection and upcoding, as evidenced by the outsized profits for insurers in Medicare Advantage compared to margins in the group or individual market. There should be little surprise, then, that the industry is chomping at the bit to “bear the risk,” that is, be overpaid to insure the remaining 60 percent of seniors who have deliberately chosen not to enroll in Medicare Advantage, those that are safely (or so they thought) enrolled in traditional Medicare.

But safe they are not, and every enrollee in traditional Medicare should take note: A program known as the Global and Professional Direct Contracting model in a little-known government agency known as the Center for Medicare and Medicaid Innovation (“The Innovation Center”) is already moving them, without their knowledge or consent, to “risk-bearing,” for-profit middlemen known as Direct Contracting Entities (DCEs). The goal: to end what’s left of traditional Medicare.

The Innovation Center was created under the Affordable Care Act (ACA) in 2010 with a mandate to test “innovative” payment and service delivery models for Medicare that would decrease costs, and if not improve, at least not worsen care. The ACA gave full authority to the Innovation Center to scale up any model it deemed fit, to all of Medicare without congressional approval. In the past 10 years, 54 models have been developed, 50 of which failed and all of which continue to use market-driven models of care. Not one model has been developed to test out single-payer, which actually would decrease costs and save lives. The latest demonstration project, created in the waning days of the Trump administration and greenlighted by the Biden administration, is the DCE model, which is being rolled out to traditional, fee-for-service Medicare beneficiaries without congressional approval or anyone’s vote.

How do you get seniors who have specifically chosen traditional Medicare to switch to a non-traditional Medicare-Advantage-like plan with a mysterious name like “Direct Contracting Entity”? You don’t tell them! You lure their primary care providers to participate in a DCE by promising the doctors much better Medicare reimbursement rates and more time with their patients, and once the doctors sign up with a DCE, all their patients are automatically “aligned” by CMS with the DCE the doctor has chosen. The DCE sends patients a letter they are likely not going to read or understand, and presto! Millions of seniors previously on traditional Medicare now belong to a DCE. That’s how DCEs leverage and monetize the doctor-patient relationship for the profit of corporations.

DCE middlemen accept capitated payments for seniors in traditional Medicare just like Medicare Advantage plans, “cherry pick and lemon drop,” deny care, upcode, spend as little as 60 percent on health care for beneficiaries (compared to Medicare Advantage’s 85 percent), and keep the rest as profit. The playbook is an old one, and it works.

There are 53 DCEs in 38 states and Washington, D.C., mostly owned by for-profit, private equity firms, investor-owned primary care practices, Accountable Care Organizations (a network of doctors and hospitals that is jointly accountable for the health of a group of Medicare patients and that receives financial incentives from Medicare to save money on patient care while meeting certain quality metrics) and Medicare Advantage plans. Many DCEs are owned by publicly traded corporations straight out of Wall Street. These are the corporations that will potentially manage the care of up to 30 million seniors who thought they were free of insurance companies. Instead, their health will be weighed against profit. And in a market-driven, for-profit health care system, the bottom line always wins.

But the most important question still remains: Why the urgency to “de-risk” (privatize) Medicare, no matter the cost? Enter Liz Fowler, architect behind the ACA, an industry darling who ensured health insurance companies would reap billions every year under the ACA, the new director of the Innovation Center brought in by the Biden administration to oversee the full privatization of Medicare. Industry giants and Washington insiders can read the writing on the wall as well as anyone else. They are acutely aware that a majority of Americans say it is the government’s responsibility to provide health care for all. They know that a pandemic has shined a light on the inefficiencies, inequities and indifference of our health care system. They know that Americans died in greater numbers and at increased rates compared to countries with universal health care systems in place. In the face of this inevitability, what would the medical-industrial complex and Congress do? Sell off Medicare, and fast, before Americans actually get Medicare for All.

Health and Human Services Secretary Becerra, a supporter of Medicare for All, and CMS Administrator Chiquita Brooks-Lasure have the authority to terminate the Direct Contracting model program. Congress has the power to hold hearings on the Innovation Center and pass legislation to provide congressional oversight to the Center’s pilot programs. The Innovation Center has put a hold on new DCE applications, to the consternation of industry, but all signs point to the continuation of using DCEs to privatize traditional Medicare. The Innovation Center will put a pretty bow around DCEs and talk about “equitable outcomes” and “person-centered care” but we should not be fooled: The end of Medicare is near. It is up to us to demand DCEs, not Medicare, be ended.