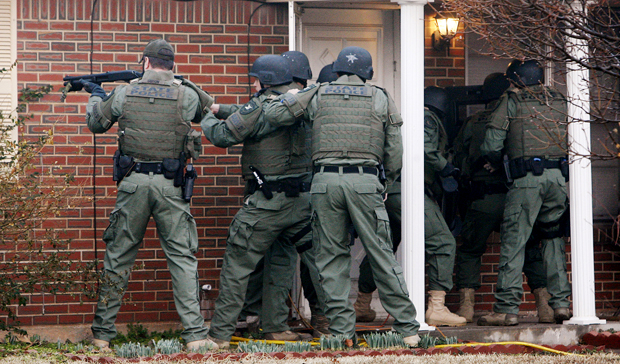 An Occupy Activist’s New Cause: Drug Raids And Police Abuse

SALT LAKE CITY — Two men with different approaches to both politics and activism are leading Utah’s police reform movement. Connor Boyack is the libertarian pragmatist, the negotiator and the policy wonk. Jesse Fruhwirth is the far-left idealist, the sign-toting activist and the revolutionary.

It was Fruhwirth who organized a rally against police brutality at the Utah state capitol in March, and another in support of Matthew David Stewart in Ogden in April. Stewart, an Army veteran, was awaiting trial on murder charges, after a botched raid on his house to serve a drug warrant ended in the death of a police officer. Fruhwirth helped Stewart’s family raise funds for his defense, and he and Boyack also organized a packed forum on police reform at the main Salt Lake City library in August.

The reedy 32-year-old is at first blush a prototype radical. He sports a sensitive beard, and a “No Fur” button clings to his bag. Even casual conversations with him inevitably return to warnings of repression, fascism, and creeping totalitarianism.

A veteran of the Occupy movement, Fruhwirth participates in various causes seeking environmental, racial and economic justice. He’s currently active in protesting against war, prisons and tar sands oil extractions. He is acutely aware of his privilege.

One thing Fruhwirth doesn’t possess, or really make any effort at, is Boyack’s knack for diplomacy. He calls Salt Lake Police Chief Chris Burbank — one of the more progressive law enforcement officials in the country — a “state terrorist.”

In fact, Fruhwirth’s ultimate goal isn’t reforming the police so much as abolishing the institution entirely, along with prisons. That, he says, would be but one prong in his revolution, which would also include “dismantling corporate rule.” He isn’t afraid of offending anyone, even those who agree with him.

“People think a mass movement needs to be popular, that it should always have a message that’s going to be immediately well-received,” Fruhwirth says. “I think that’s a mistake. I think it’s more important for everyone to look for the most radical truth that they really believe.”

As Fruhwirth sees it, his radicalism creates space for less ideological voices to be heard and taken seriously. If in the process some people dismiss him as a nut or an extremist, he’s okay with that.

Not that he doesn’t believe what he says. “I don’t just rag on Chris Burbank because it’s a strategic thing to do. I rag on him because he’s doing a terrible job.”

Fruhwirth refers to an incident in which Salt Lake police mistakenly raided a 76-year-old woman. “One cop was scapegoated and not even severely punished,” he says. “That [Chief Burbank] is reasonable-sounding makes him all the more dangerous.”

But even Fruhwirth occasionally bows to pragmatism, most notably in joining forces with Boyack to advance the cause of police reform. It may seem unusual for the outspoken leader of a local Occupy movement to align with a former campaign staffer for a Tea Party-backed senator and the head of an ALEC-backed advocacy group, but Fruhwirth brushes off his political differences with Boyack.

“He’s a principled libertarian — not just for small government, but also for shrinking the military and police power. And I think what we’re doing is complementary. I’m organizing resistance in communities that are powerless. He’s trying to win support from the people in power.”

Fruhwirth chastises the media for its inattention to the causes he champions, but he was once a reporter himself. He studied journalism at the University of Wisconsin-Madison, and was at first more interested in writing than protesting.

“I wanted to have an impact, but I thought journalism could be my activism,” he says.

During stints at the City Weekly, Salt Lake’s alt-weekly, and the Standard-Examiner, Fruhwirth often reported on police abuse, which got him interested in the issue. The stories he covered at first left him disenchanted, but they eventually started to motivate him.

“I saw how good people subvert their own consciences to uphold a vile, disgusting system,” he says. Frustrated with his inability to effect change as a journalist, he gave up on the profession and took a more direct role in his causes.

Still, Fruhwirth is pessimistic about ever seeing real police reform, much less witnessing his more grandiose visions come to pass. When asked how he stays motivated with such a fatalistic outlook, he compares himself to the abolitionists who helped slaves escape to freedom via the underground railroad.

“People were doing that work for 30 or 40 years while it was wildly unpopular, even with other abolitionists,” he says. “They must have had times when they wondered if slavery was ever going to end. And for some of them, it never did.”

When Fruhwirth compares himself to Harriet Tubman, it’s tempting to dismiss him as a caricature, or at least a cliche. But Fruhwirth doesn’t dabble in his causes, he immerses himself in them — and not just by taking to the streets with signs, but by engaging with the people on whose behalf he’s advocating.

After the police raided Matthew David Stewart’s house, Fruhwirth reached out to Stewart’s family and offered to lend a hand with media relations.

“We knew we’d need the help, and we didn’t know where to start,” says Stewart’s sister-in-law, Erna Stewart. “The media was relentless, and what they were reporting were untruths and warped versions of the prosecutor’s version [of the raid].”

“We needed to stand up for him,” she says of her brother-in-law.

“[Fruhwirth] wanted to help us stand up for what we believed. To teach us,” Stewart says. “We had a meeting, a small group of us — some of Matt’s supporters. We went over strategy and options. Jesse basically mentored me. He taught me to be strong against adversity. To not give a damn about what people thought they knew. To stand strong in what I knew was fact.”

The Stewarts have become quite close with Fruhwirth, despite the fact that their politics are well to the right of his.

“I think we got so close to him because he’s so passionate about what he does. He genuinely cares,” Erna Stewart says. “We felt that. I mean he was right there for us. I had people who I thought were my friends, my closest confidants who were turning their backs on us. Here’s this man who helped us with something so life changing and crucial, just because he cares. How could you not grow to love him?”

Fruhwirth says that he can’t help but care for the families of those who have suffered as a result of America’s war on drugs. But it’s the victims of police actions themselves who draw him to these cases, and to whom he feels most connected.

“It’s frustrating because I keep meeting these great people,” he says of the victims. “And the more I learn about them, the more I’d like to become friends with them.”

“The problem,” Fruhwirth says, “is that all of them are dead.”