An Officer’s Path To Dissent

Above Photo: Maj. Danny Sjursen gathering coordinates to set up an airstrike while under fire during a patrol in Afghanistan’s Kandahar province. (Danny Sjursen)

For a while there, I was a real star. High up in my class at West Point, tough combat deployments in two wars, a slew of glowing evaluations, even a teaching assignment back at the military academy. I inhabited a universe most only dream of: praised, patted and highly respected by everyone in my life system and viewed as a brave American soldier. It’s a safe, sensible spot. For most, that’s enough. Too bad it was all bunk. Absurdity incarnate.

The truth is, I fought for next to nothing, for a country that, in recent conflicts, has made the world a deadlier, more chaotic place. Even back in 2011—or even 2006, for that matter—I was just smart and just sensitive enough to know that, to feel it viscerally.

Still, the decision to publicly dissent is a tough one. It’s by no means easy. Easy would be to go on playing hero and accepting adulation while staying between the lines. Play it safe, stick to your own, make everyone proud. That’s easy, intellectually immature—the new American way.

When you take the journey of dissent, you lose friends, alienate family, confuse confidants and become a lonely voice in your professional world. I’ve spent years sitting in military classrooms from West Point to Fort Knox to Fort Leavenworth as the odd man, the outlier, the confusing character in the corner. It’s like leaving the church, becoming an atheist, all while still living in the monastery. Still, the truth is that the military is more accommodating than one might suspect. I wrote a critical book, published some skeptical articles, but it’s not as though anyone ever outright threatened me. The pressure is different, more subtle: veiled warnings from superiors, cautious advice from mentors.

I waited too long. I admit as much. Maybe I needed a decade to stew, or perhaps my brief sojourn in civilian graduate school shook something loose. Nonetheless, a few years back, the emotional weight was unbearable and out poured the dissenting waves.

Looking back, I can just about see my own path—what I saw, how it felt—and trace the guideposts and way points on the road to a spiritual and intellectual rebirth. The images flicker, mental fragments that explain my wayward trek to dissension.

In Baghdad, I saw chaos unleashed, watched a sectarian civil war unfold, witnessed the strife our ill-advised, unprepared invasion unleashed. We were terrified voyeurs to the tragedy playing out before us. Militias left gruesome bodies in the streets for us to find. The Sunnis cut off heads, the Shiites preferred power drills to the temples and joints. Both sides attacked us. Through it all, locals treated us to stories of how matters had been betterunder the secular brutality of Saddam Hussein.

Then there were the patrols. So many patrols. They were mostly useless, of course. Show presence, provide security, don’t get blown up. Then our kids started getting hit. It comes in flashes. Scrubbing your sergeant’s blood out of the Humvee so you can patrol the next morning. Cleaning up another soldier’s skull, fatally penetrated by a copper slug, his face frozen in a look of terror, trash from the filthy east Baghdad street beside his cheek.

The aftermath of car bombs in the marketplace. The haze of smoke and stench of burning flesh. Ordinary Iraqis: the usual victims.

Leaving the war zone. Back home. Alcohol. My driver’s suicide, hanging from a belt in his closet.

Time passes, another mate dead—overdose, prescription pills. Dead kids, my boys, and the wives and mothers I did not have the courage to face for years.

Nothing improved. Not really. The end state was Islamic State, fracture, more death, Trump, a new American crusade on the Euphrates.

Next was Afghanistan, the unwinnable war. The 13th-century irrigation system. Realizing the locals don’t want to live in our image, don’t yearn to be Americans. Knowing most villagers—at least down south—generally agreed with the basic contours of the Taliban agenda. “Allied” sheikhs and “friendly” Afghan government officials who grew the illegal poppy our patrols slogged through. Obtuse American colonels who wanted to wall off or barb-wire Afghan villages as if we were in Baghdad, South Africa or worse. 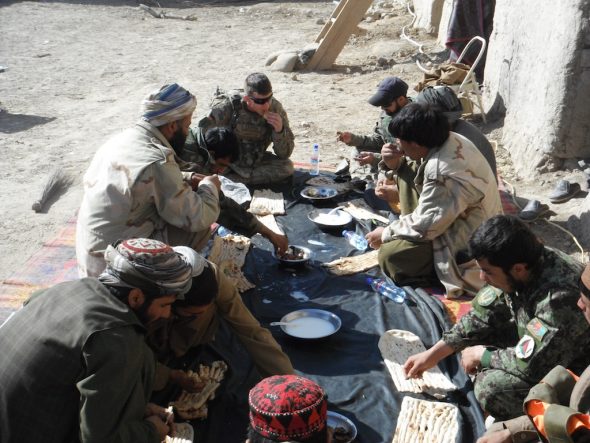 Eating with Afghan police, soldiers and militia in the Kandahar district. (Danny Sjursen)

Discerning, eventually, as I sat on the sandbags of my small outpost—the Alamo of Kandahar province—that we only really held the ground we stood on. Nothing else. Turning down invitations from Afghan “partners” to attend their regular hash-smoking buggery parties. Explaining to U.S.-trained Afghan officers—outsiders from the north who didn’t even speak the local language—that they must stop torturing their own deserters. Appearances and all.

Watching young men lose limbs and lose lives to pad the resumes of aggressive majors who want to be colonels and colonels who want to be generals. Some could hardly spell “Afghanistan.” Still, they mostly succeeded in promotion. Maybe they’ll run the next war.

Seventeen years, thousands of Americans still there, and the Taliban control more of the country than at any time since Uncle Sam’s invasion. We may never leave.

Through it all was the guiding question: Has anything I’ve done—or we’ve done—made Americans’ lives any better? More importantly, has it measurably improved the world? What if we’ve made it worse?

On a day in Afghanistan in 2011, I realized everything I was doing, and the only thing I still cared about was damage control, protecting our troops from needless death. I basically was phoning it in and should have known it was time to quit, lest I lose more of my soul. Even so, the easy path beckoned.

Of course, I’d tried to convince myself, as so many do, that staying in the military is courageous, that it’s possible to change the system from the inside, and that good people, critical thinkers, need to stay the course rather than jump ship. Maybe that’s true, maybe it’s fantasy. Who knows?

This business damages you, takes something from you, a permanent loss. It affects everyone differently. Probably, I’m a distant outlier.

Anyway, nowadays my heart is with the Rohingya in Myanmar, Palestinians in Gaza, places, oftentimes, where I’ve never even been, people I’ve never met. It’s a sad world once you’re that inside yourself.

Still, life trudges along. My wife shops for paint colors for our new house, engages with the kids, lives in the moment. I struggle with such practicalities, because, in so many ways, I’m not here. Not most of me. I’m in Baghdad, staring in wonder at the aftermath of a truck bomb. In Afghanistan, delivering a memorial address for one of my dead troopers, a kid, to be honest, that I hardly knew. 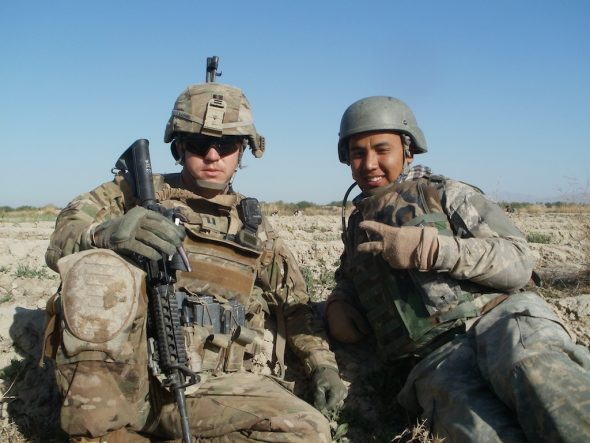 I’ll likely die a sad man. This much I know.

But for now, I can give voice to a different path, a nobler cause, a chance, at least a chance, of common sense, sober strategy and, just maybe, a semblance of peace—something a whole generation has never known. In my own minuscule way, I’ll try.

We, the few of us who care to question, owe at least that much.