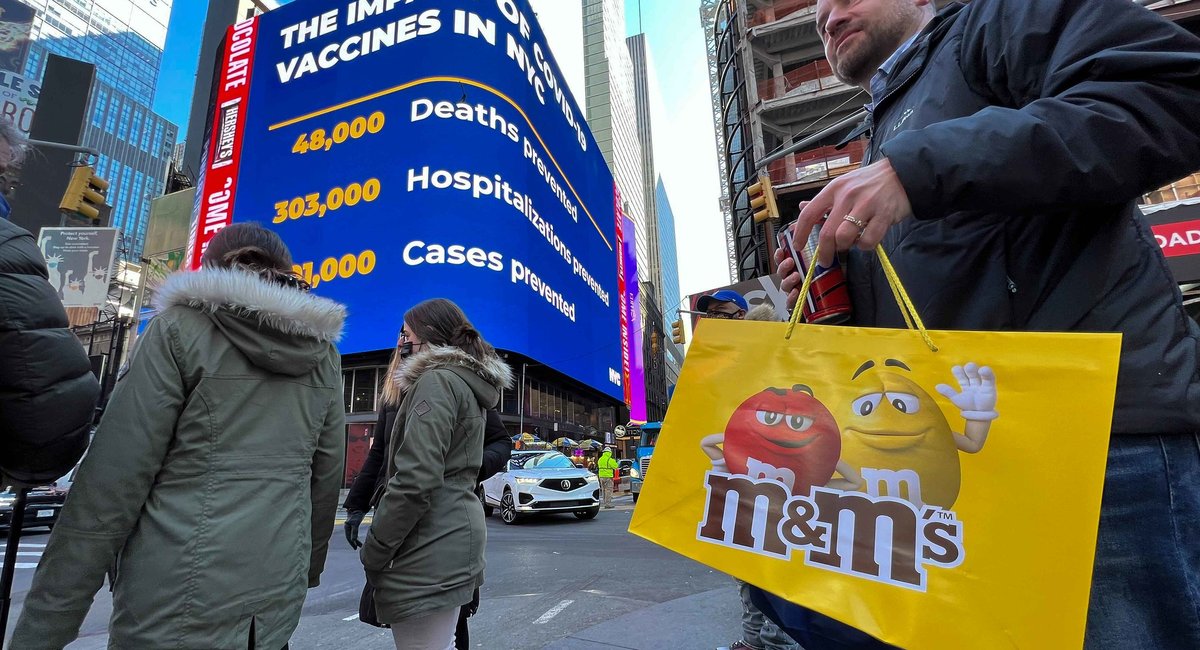 An Omicron ‘Subvariant’ Is Doubling In New York, Just As Mandates Lift

Just as New York case rates drop and officials roll back health requirements for schools and businesses, another coronavirus variant is showing signs of derailing the state’s recovery from the winter COVID surge.

Known as BA.2, this virus is an offshoot, or sublineage, of the omicron variant that just swept through New York State. It’s like a kid sister, and some experts even call it “Omicron 2.” But it spreads about 30% faster than its sibling — BA.1 — and is just as severe, according to the World Health Organization.

Data from the New York State health department shows that BA.2 is quickly moving to dominate its viral kin. BA.2 is doubling in proportion statewide every two weeks and represents about one in 10 sequenced cases. This trend is backed up by similar data compiled by the Centers for Disease Control and Prevention for the New York and New Jersey region.

The pattern is mind-boggling given what New York experienced this winter. Since omicron’s discovery in late November, the state has recorded 2.2 million COVID-19 cases — its biggest surge of the pandemic. Despite the immunity from those infections and 75% of New York residents being fully vaccinated, BA.2 is finding space to thrive.

The question now is whether BA.2 will stay in the background as New York’s winter surge peters out or lengthen the wave just as life is getting back to normal. This sister variant has been known to global scientists since mid-November but has just lingered on the sidelines in some places. When BA.2 hit Denmark this winter, for example, it caused a second surge and lifted daily deaths to a new summit — mere weeks after the country had peaked with its sibling. But BA.2 is also spreading through the U.K. and South Africa without reversing progress against the disease. (Update: After lingering in the background for weeks, new data shows BA.2 is now contributing to an uptick in cases and hospitalizations in the U.K.)

Some health experts think BA.2 won’t cause much harm in New York because of the area’s vaccination rate and because it is gaining ground so soon after the last surge.

“I don’t think it means a lot because there’s pretty good cross-immunity between BA.1 and BA.2 and because the omicron wave was so recent,” said Dr. Bruce Farber, chief of public health and epidemiology at Northwell Health and the chief of infectious diseases at North Shore University Hospital and LIJ Medical Center. “People clearly have good immunity. It’s very good immunity for 90 days. It’s probably decent immunity for six months.”

But other researchers worry BA.2 could prey upon unvaccinated groups such as children and people who have not been boosted. Only 33% of New York residents have received a booster shot. So few health care workers have taken their additional doses that the state health department postponed the enforcement of a booster mandate for this workforce, citing fears of staffing shortages.

Sure, these omicron variants are milder than their predecessor, the delta variant, which caused havoc last summer. But they’re also three to five times deadlier than pre-delta variants, according to a recent study from the CDC.

“Spread of the BA.2 subvariant could extend the winter surge,” said Bruce Y. Lee, a public health policy expert at CUNY and executive director of the research group PHICOR. “We know that cases have been going down, but the cases are still happening at a reasonably high level right now.”

COVID-19 risk is considered low in most of New York state and across the five boroughs, but its abundance is still much more than we’ve seen during past low points in the pandemic. The state, for example, is still averaging about 1,800 cases daily. During last summer’s lull, this average was six times lower.

The BA.2 subvariant has also weakened our ability to treat the disease. Earlier this winter, its potent sibling knocked out two of the four monoclonal antibody drugs used to remedy infections in high-risk individuals. Recent evidence from New York University suggests that BA.2 can bypass a third drug, sotrovimab.

“So it’s possible that we have even fewer resources for treating infections, say, in immunocompromised individuals or individuals that otherwise have a breakthrough infection,” said Dr. Sam Scarpino, the managing director of pathogen surveillance at the Rockefeller Foundation’s Pandemic Prevention Institute.

On the positive side, such breakthroughs in vaccinated people don’t appear more prevalent with BA.2 and reinfections overall appear to be rare. But every case of the coronavirus offers an opportunity for developing chronic symptoms — or long COVID.

Lee said New York could not rule out any future possibility with BA.2 at the moment. He, other health experts and city officials explained what people should know in the meantime and how to determine if a region is truly free from the clutches of the coronavirus.

How Will We Know If BA.2 Is Creating A Surge?

Earlier this year, Gothamist reported on how the daily number of COVID tests was shrinking faster than ever before in New York City. That pattern has only deepened. The city started February giving out 60,000 PCR tests per day. By the end of the month, this number had almost been cut in half — to fewer than 40,000 daily tests.

The city has never seen a testing drop like this one, and it could be due to more people using at-home kits instead of going to clinics — or fewer concerns about the milder-but-not-mild omicron variant.

Michael Lanza, a spokesperson for the New York City Department of Health and Mental Hygiene, said the department still feels confident in its ability to monitor trends using the current surveillance data. He said the city relies on multiple lines of data to monitor the trajectory of community transmission, such as lab tests, hospital reporting and public health surveillance of emergency department visits.

The city has also adopted the CDC’s new color-coded system for judging a community’s risk of severe disease. It places a larger emphasis on hospital burden rather than the past habit of mostly focusing on case rates.

But some health experts worry this new system comes with blindspots, namely by ignoring the test positivity — the percentage of tests that come back showing an infection.

“I do worry that there’s no test-positivity percentage here. One way to keep your numbers is just not to test,” Dr. Daniel Griffin, MD, PhD, infectious disease clinician and researcher at Columbia, told the This Week In Virology podcast on Saturday.

The test positivity used to be a check on deflating COVID risk because when it rises above 5%, it offers a signal for judging when a community is overburdened with coronavirus transmission.

Under the new color-coded system, a locality could just avoid testing to stay below high-risk cutoffs.

“Well, it might keep you below the cutoff but then you might get hit with these lagging indicators,” Griffin said, referencing how COVID hospitalizations and deaths tend to lag behind infection spikes by a few weeks.

To avoid the pitfalls of the testing drop, leaders and the general public could turn to the sewers. Because infected people poop and pee out remnants of the coronavirus’s genetic code, wastewater surveillance has shown itself to be a reliable way to catch coronavirus spikes in New York weeks in advance.

“What we’ve seen is there’s a good two-week early warning sign,” said Dan Lang, who runs strategic operations for the New York State Department of Health’s Center for Environmental Health. “When [coronavirus in] wastewater starts to go up and we can confirm that the trend is going up, two weeks later, we’ll have an increase in cases.”

The wastewater dashboard for New York state shows most counties are improving though some areas around Warwick are seeing slight increases in coronavirus intensity. New York City doesn’t report to the state dashboard, but it is a part of a national tracker recently launched by the CDC. The federal tracker isn’t reporting recent data from the five boroughs, but the city health department says all is well.

“Wastewater surveillance data have been consistent with our clinical testing data,” said Lanza.

The New York City health department has reported an uptick in pediatric COVID-19 deaths since the start of the new year. Since then, the city’s death toll for kids rose by a half dozen — from 29 to 35 children over the course of the pandemic.

The rise comes after no fatalities had been recorded for this age group for months. In early October, the city raised the tally to 30 before dropping it back to 29 a month later. Regardless, six deaths in two months when the coronavirus hadn’t taken any children’s lives in nearly half a year speaks to the intensity of the omicron surge.

Any death is tragic, but even more so when it is one of our littlest New Yorkers.

“Any death is tragic, but even more so when it is one of our littlest New Yorkers. These deaths were related to the very large surge of cases during the omicron wave,” said Lanza from the city health department. “Although severe outcomes among children are rare, the very high level of transmission and unprecedented number of cases unfortunately resulted in some severe outcomes among children.”

These deaths are a reminder of what happens when a community cannot keep the coronavirus in check. But pandemic interruptions to education and business have consequences, too, and people are ready to move on from the pandemic. Public polling shows the New York public is split on the removal of COVID restrictions. About half of voters are ready to lose indoor masks and half want to keep them.

But with vaccination rates stalling and BA.2 lingering in the background, Scarpino, from the Rockefeller Foundation’s Pandemic Prevention Institute, is worried about the nation being caught off guard again. He said a turning point last year revolved around mask mandates ending last summer even though the U.S. had missed its vaccination goals.

People were told to go about their lives if they were vaccinated, but so many people still lacked their shots, that the delta variant took off once everyone started mixing again.

“My biggest concern about BA.2 Is the potential erosion of trust in public health,” Scarpino said. “If we get this one wrong again, it kind of feels like replaying the tape that happened with the Delta variant.”

He said places like the U.K. may have escaped a BA.2 surge because the Brits have a higher rate of booster shots (50%) than the U.S. (28%). Another hypothesis is places that experienced big delta waves over the summer, such as the U.K., might be better protected against BA.2 than locations that didn’t.

“There’s a lot of difference across the U.S. in terms of the potential risks for a BA.2 variant,” Scarpino said. “While it may not cause a national surge, there could be surges that occur locally — that could still lead to spikes in hospitalizations.”