This came from an article in yesterday’s Washington Post 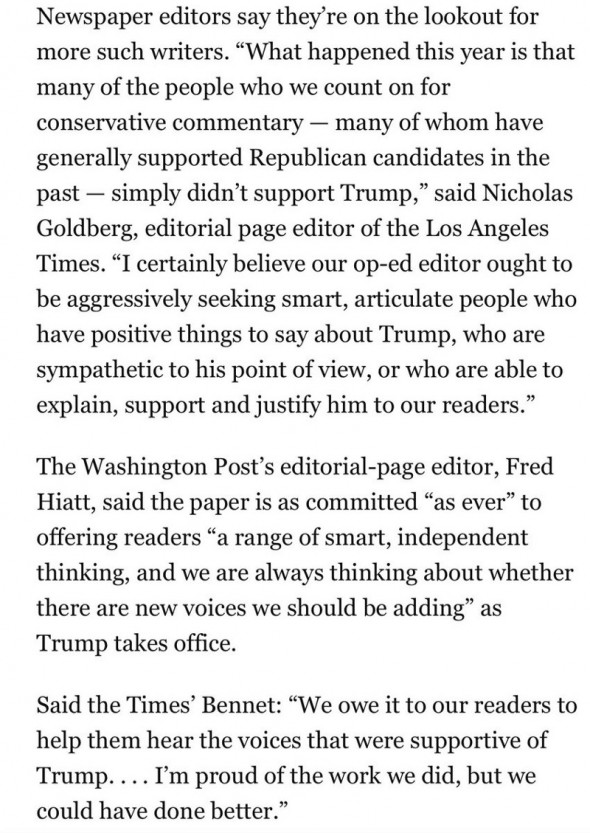 Over the next year or two, media — especially prestige print media — will begin thinning out its ranks. The economic forecast, despite temporary spikes in post-election subscriptions, is not good and headcount spots will have to be cleared to make room for all the incoming pro-Trump takes. “Identity politics writers” (read: anyone who isn’t white and who doesn’t spend 99% of their time reporting) will almost certainly be the first to go.

In reality, this is just a self-correction on the part of prestige print media. As early as three years ago, the entire senior editorial staff of the New Yorker magazine was white (the web, where I worked for a short stint in 2014, was slightly more diverse. I even sat next to a minority, which was a first for me in my publishing career.). Their assistants, save one, were white. The same, I believe, was more or less true of New York and the New York Times Magazine, where I, full disclosure, am a writer-at-large. Those places, of course, employed a small number of minority writers, but the power structure was always controlled by the same types of people.

After Ferguson, I remember being in meetings for the web team at The New Yorker where it became painfully obvious to everyone in the room that we simply did not have a writer to tackle the massive change that was happening in the country. Good hires were made and over the next two years, the magazine and web (mostly the web) brought on almost a dozen new minority writers and editors. This, even when I worked there in 2014, would have been a completely absurd scenario. Back then, me and one of the only other minorities on the 20th floor of the old Conde Nast building would have to routinely schedule lunches just so we could vent about the totemic whiteness of the place we had dreamt of working our entire lives. If you look at the employee rolls of all these prestige print and web outlets, you’ll see the same, exact pattern of hiring over the past two years. I used to think this changing of demographics in prestige places could lead to a new era of enlightened and forceful publishing. I am no longer so optimistic.

I bring this up because I think it’s important that minority writers (I have decided to stop using “people of color” for reasons I might explain later, but mostly because it feels a bit too cheery in Trump’s America) be honest with ourselves. Many of us were hired in the last two years and almost every single one of us reports to a white editor who will kowtow to the panic of his or her publisher. Too many of us were brought into media as part of a cynical push to turn “race writing,” especially race writing about pop culture, into a click factory (Or, perhaps, more tellingly, to satisfy the guilt of white editors who finally looked around and realized that their liberal values were in direct conflict with the optics of their workplace.). The media companies who clap themselves on the back because they have an “authentic voice” writing about Beyoncé or the VMAs did not make a real commitment to diversity. Instead, they put forward poorly paid “fellowships” or meager web contracts that require no investment on their part. They, in large part, do not give out reporting assignments that might build up skills that could translate into long careers. The sort of work they do have so many of us do — “woke” pop culture writing — will only last as long as it drives the wan, asymmetrical glow of Media Twitter.

The real path to success as a journalist still remains the same: Have enough independent wealth so that you can take an unpaid internship or a $35,000 year job as an editorial assistant or fact-checker at a prestigious place and then work the office politics game (read: know how to work a room of Ivy League graduates) to the top. In five or ten or fifteen years, the network you build up during those early years will occupy the highest spots in media and they will bring you into the power structure.

This same media has sprayed its panicked guts all over the walls in the weeks following the election, but it will eventually settle down into what these prestige journalistic outlets have always been — center-right, bourgeois takes read by lawyers on planes. And since the majority of lawyers on planes aren’t joining up with ‘the resistance’ (whatever the fuck that means), editors and publishers will start hiring alt-Tucker Carlsons so they can hear both sides. They will need to clear headcount spots to do this and they will quietly start purging the same writers they hired so enthusiastically — with rousing rounds of Tweet applause — two years ago.

They will do this while knowing that the Democratic presidential candidate won the popular vote by almost three million votes despite catastrophically myopic campaign strategy. They will do this while knowing that anyone hired to be a “pro-Trump journalist” will, by the edict of his or her title, feel the need to defend the President’s patently false tweets and his attacks on reporters. They will do this while sitting on bloated, absurd panels where they will tell young writers that the only job of the journalist is to “speak truth to power.” They will do this while still tweeting the same virtue signaling garbage they tweeted out over the past two years, while still convincing themselves that every other media outlet is bad except their media outlet. The tyranny of “good enough” (the way these prestige media outlets stayed so white in the past was to say, more or less, that anyone who could touch a word of copy had to be “good enough,” a standard, of course, that only meant “good in the same way that I am good”) will be restored.

This is the uncomfortable truth we face. But over my relatively short career, I have met so many wildly talented and generous and serious minority journalists who have provided me with emotional and spiritual support that I will never be able to repay. These relationships are still there. The talent is still there. The audience for our work is still there. What’s changed is where we will publish that work and the spaces in which we will foster new friendships and rivalries.

We, the like-minded who believe that there is value in the cliché of speaking truth to power and value a progressive coalition over careerism, have to start building our own shit.