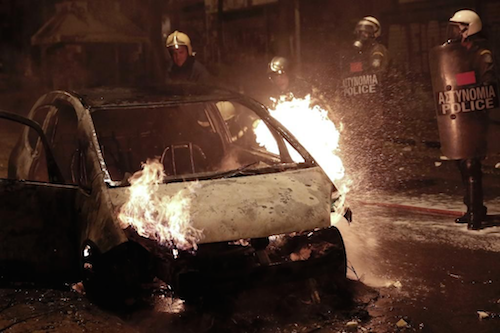 Yesterday, demonstrations in solidarity with the Greek anarchist Nikos Romanos — who has been on hunger strike for 24 days to demand his right to educational furlough — were called in big cities and islands across Greece. In Athens, more than 10.000 people marched, proving that no one is to be left alone in front of the vengeful fury of the state. Once again, however, it was confirmed that, when the twisted justifications of the repressive state don’t work, the batons of the police are ready to do the job.

The demonstration started at Monastiraki and arrived at Syntagma Square, where Syrian refugees have been camping out for 15 days to demand state recognition of their political refugee status. Until its end, the march was followed by heavy police forces. After the demonstration, protesters moved towards the neighborhood of Exarcheia, where the the first teargas was used and the first stones were thrown.

Exarcheia is the contested neighborhood of Athens. It is closely tied to the anarchist movement in Greece and a stronghold of the struggle against forced ideological conformity. For the state it is a hub of criminality and for the police a pool to locate its ‘usual suspects’. In such a patrol against ‘criminality’ in December 2008 the police special guard Epameinondas Korkoneas murdered the 15-year-old Alexis Grigoropoulos in cold blood. Alexis died in the arms of his best friend Nikos Romanos. Six years later the target of the state is Romanos himself — and yesterday in Exarcheia yet another wave of police repression tried to silence the voices that keep on fighting.

Teargas, stones and barricades set the background to the clashes. In an attempt to protect themselves from the police raids, protesters resorted to the premises of the Polytechnic School. The police subsequently surrounded the university buildings, trapping the protesters inside and heavily beating those found in the surroundings. The total number of people brought in for questioning last night still remains unknown, as the police refused to provide any relevant information. Overall, 10 people were arrested, most of whom were located by the police in the general area of Exarcheia, outside the conflict points, and all of them were brutally beaten.

Five of the arrested are reported to have suffered extremely heavy injuries, their heads cracked open, their ribs and legs broken, and one of them having been run over by a police motorcycle. After their arrests, they were all transferred to GADA (General Police Directorate of Athens). Τwo Syriza MPs who arrived at GADA last night report that the protesters were not allowed to communicate with their lawyers and their mobile phones were taken away. The police denied to provide their names and inform their relatives, or to disclose any information about their whereabouts. In order to avoid lawsuits for arbitrariness, they indicted the detainees with criminal charges. Criminal acts did indeed take place yesterday, but they were not committed by the protesters.

The two Syriza MPs, as well as the mother of one of the detainees who was notified by fellow protesters and arrived on the spot, report that the 6th floor of GADA, where the 10 protestors were detained, was covered in blood. The police did not provide any explanation for this repulsive image and refused to provide any information as to whether the detainees were in need of hospitalization or if they were indeed hospitalized. Families were informed by the protesters who had gathered outside GADA that their relatives were arrested and were forced to start searching the hospitals around Athens in the hope of finding them.

Parallel to this, this morning the judges of the Judicial Council refused Romanos’ right to educational furlough. Later his demand was rejected for the second time, with the full approval of the Minister of Justice Ch. Athanasiou who stated: “The council correctly rejected the demand for furlough to Romanos,” before adding that “even if himself would come down, he wouldn’t get a furlough. These are the laws.” It is obvious now that the state is unwilling to provide a solution. More than that, the state is playing political games at the expense of Romanos’ life. Indeed, the government is throwing crumbs on the table by focusing on the technical part of this deadlock.

In this spirit, the Minister of Justice proposed to introduce distance learning for detainees in order to “facilitate” the continuation of their education. However, these are only vain attempts to downplay the political relevance of Romanos’ hunger strike. The denial of educational furlough should not be seen separate from the fact that Romanos had the audacity to refuse to meet the President of the Republic after succeeding in his exams, or to refuse the money the state offered him as a reward for achieving the best grades. These may be minor incidents, yet they are indicative of the situation: Romanos’ position is political, and this is a political crackdown on an anarchist prisoner and the anarchist movement more generally.

Today, Romanos responded to the attempt to de-politicize his struggle in astatement:

“I, on my side, continue, I overtake every possibility to step back and I respond with FIGHT UNTIL VICTORY OR FIGHT UNTIL DEATH. In any case if the state murders me with its position, [Justice Minister] Mr. Athanasiou and his fellows will go down in history as a gang of murderers, instigators of torture and of the murder of a political prisoner.

What happened in Athens yesterday and today — the arbitrary arrests, the brutal beating of protesters in GADA, the indictments with criminal charges, the refusal to grant Romanos’ his right to educational furlough — are all part of the same narrative. The target of these measures is to show those who resist that they do not stand any chance of victory. None of this is new. We are familiar with state repression and we are familiar with its multiple faces. But we refuse to grow accustomed to it. The movement stays on the streets and it keeps on fighting. The days that are coming are the days of Nikos, of Giannis, of Andreas, of Dimitris, of the 10 protesters arrested yesterday, and of the thousands who are repressed and yet choose to keep on fighting.