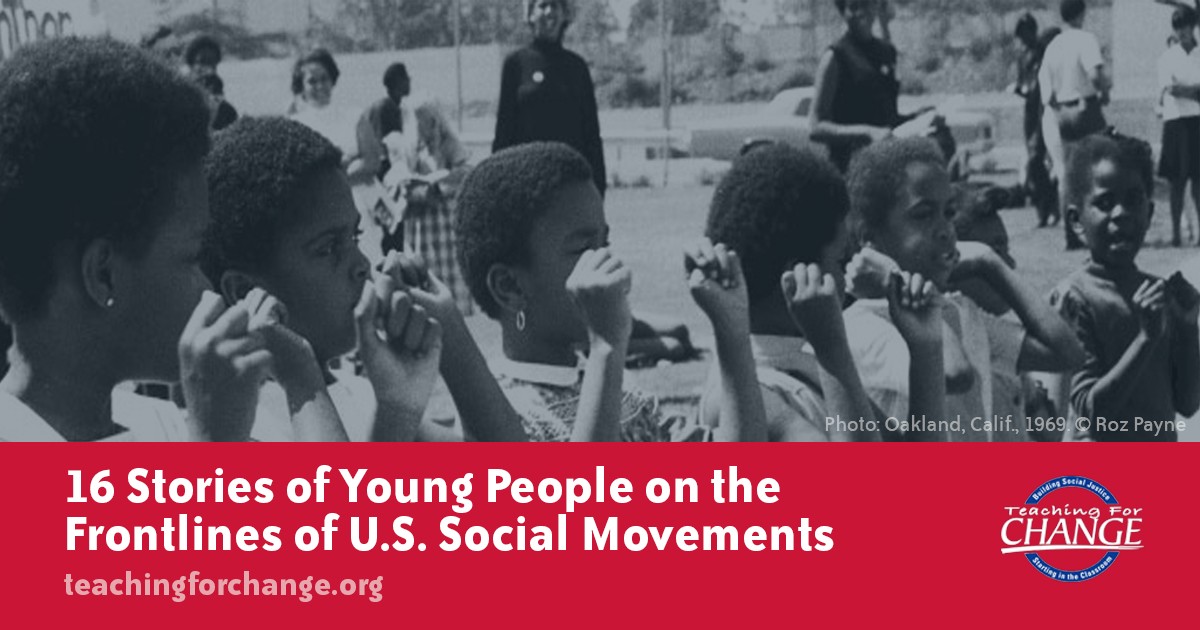 And The Youth Shall Lead Us

Above photo: From Teaching for Change.

In light of the outpouring of youth activism for stricter gun laws and against the militarization of schools, Teaching for Change shares these examples of young people at the forefront of social movements throughout U.S. history. We hope these can be useful in the classroom to inform and inspire this generation of activists.

18th and 19th Centuries: Abolitionists and the Underground Railroad 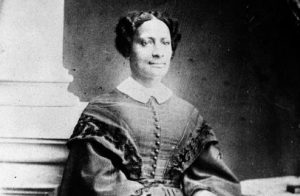 Many youth were among the 19th century abolitionists and the people who were active on the Underground Railroad. For example, Sarah Parker Remond, a member of the Salem Female Anti-Slavery Society, gave her first abolitionist speech at the age of sixteen. Frederick Douglass fought his overseer for freedom at the age of 16. In 1834, Henry Highland Garnet and some of his classmates formed their own club, the Garrison Literary and Benevolent Association. More than 150 African Americans under 20 attended the first meeting. It is estimated that 80% of those who bravely embarked on the Underground Railroad were in their teens or early 20s. Here is a lesson on a people’s history of the abolition movement. 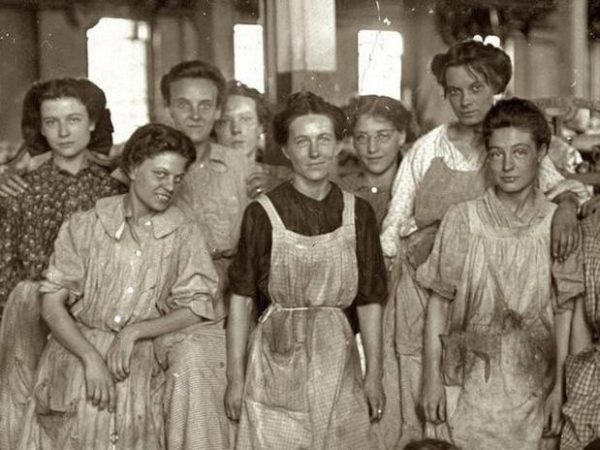 In the 1820s, factory owners in Lowell, Massachusetts, began recruiting girls as young as ten year old to work in their textile mills. In 1934, mill owners announced they would be cutting wages, and the girls began meeting to discuss how they should respond. When owners fired one of their leaders, 800 young women walked out on strike. Two years later, the owners announced another wage cut. In response, the young women walked out together and formed the Factory Girls Association and later, the Lowell Female Labor Reform Association. Teach about women in the labor movement with “Birth of a Rank-and-File Organizer” and find more bios of women in the labor movement.

During the summer of July 1899, the young children who sold newspapers in New York City, known as “Newsies,” went on strike against millionaire newspaper publishers William Randolph Hearst and Joseph Pulitzer when they raised the wholesale prices of their newspapers but kept the price for their customers the same. After two tumultuous weeks, the strike was successful. The publishers agreed to roll back the price increases and to take back unsold papers at a full refund. Read more. Photograph by Lewis Hine.

On January 28, 1917, 17-year-old Carmelita Torres led the Bath Riots at the Juarez/El Paso border, refusing the toxic “bath” of ‘“disinfectant” imposed on all Mexican workers crossing the U.S. border. Press accounts estimated that, by noon, she was joined by several thousand demonstrators at the border bridge. Most who joined the protest were young domestic workers. The chemicals used for the “baths” were originally Zyklon B and later DDT. The protest lasted for three days and was not successful. Read more. 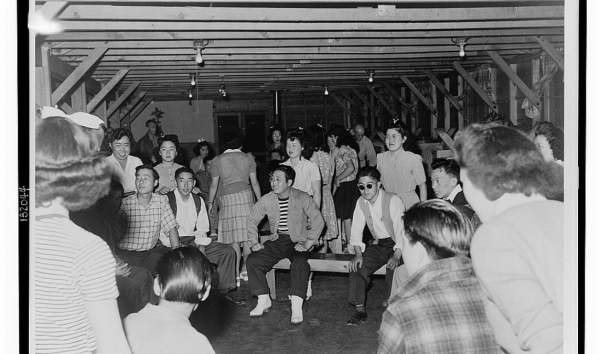 In February 1942, President Franklin D. Roosevelt issued Executive Order 9066, which ordered 120,000 people of Japanese ancestry to be forcefully removed and imprisoned in internment (concentration) camps. U.S. government officials also forced inmates to complete 28 surveys to determine how “American” they were. Many refused to answer the surveys, or only answered “no” on the questionnaires. At Tule Lake in California, thirty-five teenagers protested by refusing to turn in their surveys. They were arrested and taken to jail at gunpoint. Learn more from the film “Conscience and the Constitution.”

To address the poor facilities at the segregated high school she attended in Farmville, Virginia, sixteen-year-old Barbara Rose Johns decided to take action. She assembled student council members and made a plan to go on strike. On April 23, 1951, Johns and her fellow students went on strike to protest the substandard conditions at Robert Russa Moton High School. As a result, NAACP lawyers met with students and the community and filed a lawsuit at the federal courthouse in Richmond, Virginia. The case was called Davis v. Prince Edward, and it became one of the five cases that the U.S. Supreme Court reviewed in Brown v. Board of Education of Topeka when it declared school segregation unconstitutional. Read more.

The Student Nonviolent Coordinating Committee (SNCC) was founded in April 1960 by young people who had emerged as leaders of the sit-in protest movement initiated on February 1 of that year. SNCC veteran Charlie Cobb Jr. explains, “No civil rights action in history had ever swept the South the way that the sit-in movement did; certainly no action driven and led by young people. SNCC’s youthfulness was important to what it was and what it became. The number and manner in which young people began emerging as leaders in the civil rights movement in 1960 was unprecedented. As Martin Luther King Jr. put it at a Durham, North Carolina civil rights rally less than a month after sit-ins erupted in Greensboro, ‘What is new in your fight is the fact that it was initiated, fed, and sustained by students.’ An often ignored effect of this student action was their making legitimate going to jail for a principle. And this changed the students, laying the foundation for everything they would do as SNCC organizers.” Read more at SNCCDigital.org. Teach about SNCC with Stepping into Selma and Teaching SNCC: The Organization at the Heart of the Civil Rights Revolution.

In the spring of 1963, Birmingham, Alabama, was the “do-or-die” battleground for the Civil Rights Movement. Heavy intimidation by Birmingham authorities left the Movement floundering. Using word-of-mouth under a veil of secrecy, more than 4,000 African American schoolchildren organized to walk out of classrooms at exactly 11 a.m. on “D-Day,” May 2, 1963, touching off a week of mass demonstrations and rioting that shocked the nation. Police tried to stop them. Yet, the children prevailed. Read more. Teachers can request a free documentary film for the classroom from Teaching Tolerance called Mighty Times: The Children’s March.

Christopher Eckhardt (age 16), John F. Tinker (age 15), Mary Beth Tinker(age 13), Hope Tinker (age 11), Paul Tinker (age 8) along with other students decided to wear black armbands to their schools in Des Moines, Iowa to mourn the dead on both sides of the Vietnam War and to support a Christmas truce. The Des Moines school board tried to block them from wearing the armbands, and most of the students who wore them were suspended. The students argued that their right to free speech was being violated, and with the help of the American Civil Liberties Union, filed a case that went all the way to the Supreme Court in Tinker v. Des Moines. In 1969, they won. Their victory was based on the precedent of Burnside vs. Byars involving high school students in Mississippi and their right to wear buttons advocating the right to vote. Read more. 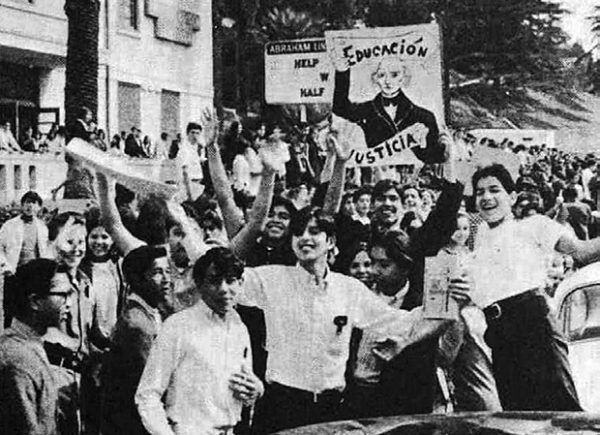 In 1968, Mexican American students in East Los Angeles decided to take action to protest Anglo-centric textbooks, poor funding for schools, and other racist policies toward Chicano students. In March 1968, students presented a list of 39 demands to the school district including bilingual and bicultural education, improvement of school libraries, and an end to corporal punishment, and more. An estimated 15,000-20,000 students walked out of class at five L.A. high schools in what became known as the “blowouts.” Teach about the blowouts with “The History All Around Us: Roosevelt High School and the 1968 Eastside Blowouts.”

Over the last decade undocumented youth, known as DREAMers (for the Development, Relief, and Education for Alien Minors, or DREAM Act), have built a movement to push for changes to immigration law−speaking out publicly about their situation, staging demonstrations, holding hunger strikes, forming alliances with other movements, and more. In 2012, after DREAMers protested and lobbied against President Obama’s aggressive deportation program, he issued an executive order creating the Deferred Action for Childhood Arrivals (DACA) program which now protects nearly 800,000 Dreamers from deportation. In September, when President Trump announced he was canceling DACA, students walked out of high schools in Denver, Fort Worth, Phoenix, and Albuquerque, among others. Within hours of the announcement, the President backed down from his original position, yet their status remains unresolved. Learn more at United We Dream, DreamActivist, and Dream Action Coalition. 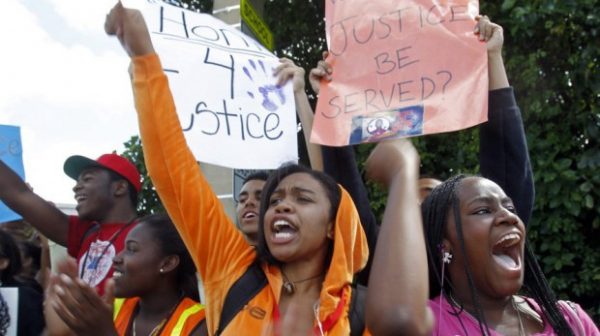 In February 2012, unarmed teenager Trayvon Martin was killed by George Zimmerman in Sanford, Florida. No charges were initially filed against Zimmerman, and as the story spread, so did outrage. In March, thousands of students walked out of elementary, middle, and high schools across Miami, where Martin had attended high school. In April, young activists who would go on to found the Dream Defenders organized a march from Daytona to Sanford. The students walked for three days to Sanford and then blocked the doors to the police station until local officials and law enforcement agreed to meet with them to hear their demands. Martin’s killing and the Dream Defenders’ organizing efforts helped give rise to today’s ongoing #BlackLivesMatter movement. Learn more about Black Lives Matter and the Florida-based Dream Defenders. Here are teaching resources on #BlackLivesMatter. 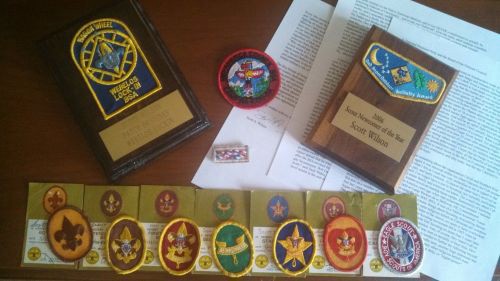 Eagle Scout is the highest rank that a Boy Scout can earn. In 2012, a Boy Scout troop leader refused to approve seventeen-year-old Ryan Andresen’s Eagle Scout badge project, a tile wall with an anti-bullying message, after he came out to his Boy Scout troop as gay. That same year, the Boy Scouts of America announced that they would continue to exclude openly gay participants from the organization as leaders or participants. Following the announcement, Eagle Scouts of all ages began to resign and return their medals to the BSA offices. Within a year more than 200 posted letters explaining why they resigned online. In 2013, the BSA decided to allow openly gay youth into scouting, and two years later they decided to allow openly gay leaders. 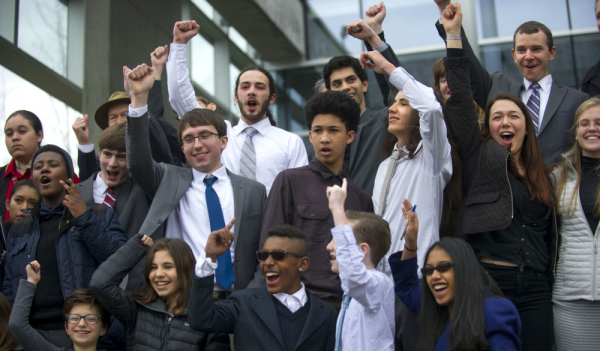 In 2015, 21 children from around the country filed suit against the U.S. government in a case called Juliana v. US. They argued that by adopting policies that promote fossil fuel use, leading to the emission of carbon dioxide at rates that change the climate, despite knowing these energy sources are warming the planet, the federal government violates “the youngest generation’s constitutional rights to life, liberty, and property,” and fails to protect essential resources held in trust for the public. Read more in Teen Vogue and Our Children’s Trust.

On October 26, 2015, Niya Kenny witnessed a violent altercation in her math classroom at Spring Valley High School in Columbia, South Carolina. A school resource officer flipped a classmate over in her desk and dragged her across the room. Kenny spoke up against the officer’s actions. As a result, she was arrested along with her classmate. After widespread protest, the charges were dropped. Kenny has worked with the Alliance for Educational Justice to launch an #AssaultAt hashtag so that students can track and expose other examples of assaults on students by school police.