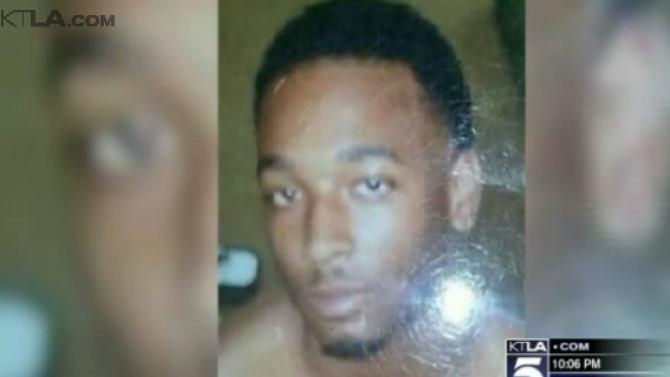 Update: Ezell Ford, 25, was unarmed and, according to his family, was lying on the ground when he was fatally shot by a Los Angeles police officer Aug. 11, 2014.  Source: KTLA SCREENSHOT

Mom Says Son Was Lying On the Ground, Obeying Orders and Shot in the Back Three Times, Another Witness Confirms Story; Incident Began with “Investigative Stop’

The Los Angeles Police Department shot and killed a black man in South L.A. on Monday.

Police conducted an “investigative stop” in the Newton area around 8:20 p.m., according to a news release from the LAPD. “During the stop a struggle ensued, which resulted in an officer-involved-shooting. It is unknown if the suspect has any gang affiliations,” the release continues. “The suspect was transported to a local hospital and after lifesaving efforts he succumbed to his injuries.”

A woman claiming to be the deceased man’s mother called KTLA and identified the man as Ezell Ford. Tritobia Ford said her son was lying on the ground and complying with the officers when he was shot three times.

An unnamed man who claimed to be Ezell Ford’s cousin also spoke with KTLA.

“They laid him out and for whatever reason, they shot him in the back, knowing mentally, he has complications. Every officer in this area, from the Newton Division, knows that — that this child has mental problems,” he said. “The excessive force … there was no purpose for it. The multiple shootings in the back while he’s laying down? No. Then when the mom comes, they don’t try to console her … they pull the billy clubs out.”

Officer Jane Kim, a spokeswoman for the Los Angeles Police Department, said a vigil had been scheduled for Tuesday night in response to the incident, according to USA Today.

No officers were injured during the incident, according to the LAPD. The Force Investigation Division is set to investigate.

The shooting comes just days after the shooting death of 18-year-old Michael Brown in Ferguson, Missouri. Brown was fatally shot by a police officer in the St. Louis suburb on Saturday, Aug. 9. He was unarmed. Dorian Johnson, who was walking with Brown before the shooting occurred, claimed Brown was retreating from the officer with his hands up when he was shot, CNN reported. Ferguson police, however, say a “physical confrontation” occurred prior to this.

Looting and unrest has rocked the neighborhood in the days following Brown’s death. At least four people, including two police officers, have been hurt and 47 arrested in the aftermath of the shooting, according to St. Louis’ KMOV.