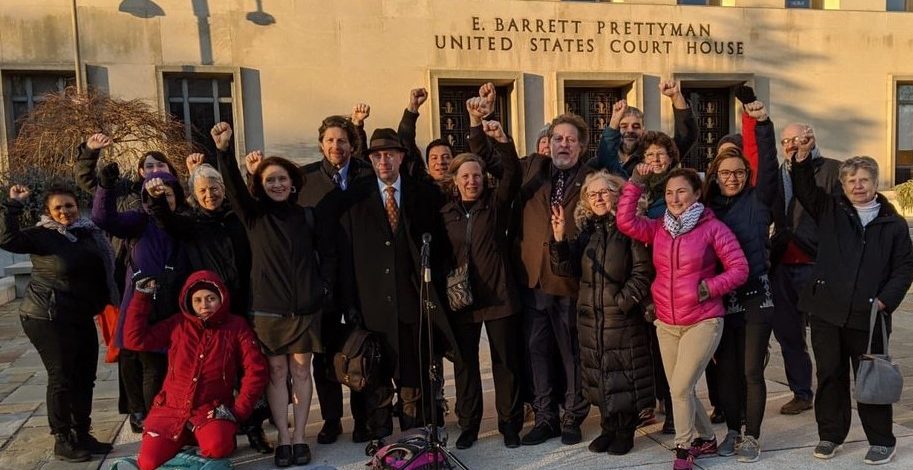 Mistrial Is Another Blow To US Coup In Venezuela; Our Work Continues

Last week, we along with Adrienne Pine and David Paul were unsuccessfully prosecuted by the Trump administration for our protection of the Venezuelan embassy in Washington, DC from April 10 to May 16, 2019.  The jury was unable to reach a unanimous decision and so we remain innocent of the charge of interfering with the protective functions of the US Department of State. The judge declared a mistrial. It was a partial victory and we greatly appreciate the jurors who were able to see through the cloud of misinformation in the courtroom and vote to acquit us.

The day our trial started, Juan Guaido returned to Venezuela where he was harassed and physically assaulted by protesters. He is unable to muster support at home even from the opposition. Guaido’s presidential charade is fading but the United States has not given up on its regime change campaign in Venezuela. New sanctions are being imposed and there have been recent attacks of sabotage within the country that resemble ones backed by the US in other countries to cause disruption and discord. As Citizens of Empire, we must continue to oppose US intervention in other countries.

Note: The Trump prosecutors will announce on February 28 whether they will prosecute us again. The Embassy Protection Defense Committee, our lawyers and the four of us are preparing for a second prosecution. Please check DefendEmbassyProtectors.org for updates and what you can do to help prepare our defense.

After the trial, half the jury stayed behind to answer questions from the lawyers and the judge. What stood out in their answers was confusion. The information they heard in court was incomplete, which made it difficult to understand what happened. A major source of confusion was that the testimony in the trial was limited to three days from May 13 when a trespass notice was delivered to May 16 when the arrests occurred. The jurors were not allowed to be told about the full 37 days we were in the embassy when at times more than 70 people stayed there. They asked — why were you there for those three days? Why did you go there in May when the new president, Juan Guaido, came to power in January? The prosecutor’s successful manipulation of Judge Howell to limit the testimony to those three days created juror confusion as the story did not make sense.

Of course, Juan Guaido never came to power. He has not been president for even a nanosecond. When this so-called ‘president’ returned to Venezuela, after a US-sponsored tour of Europe, the customs officer took his passport and explained he had violated the law by leaving the country. No real president could have a customs officer take his passport.

Guaido was not welcomed when he walked through the airport and out into the streets. He was surrounded by protesters calling him a traitor and an assassin and chasing him away from the airport.  They were angry in part because during his trip Guaido called for more sanctions, which have shortened the lives of over 40,000 Venezuelans, and in the past, he even called for a US military attack on his country. It is obvious he is hated by the people of Venezuela as even the opposition did not support his re-appointment as president of the National Assembly. Not only is he not the president, but he also is not even the leader of the political opposition to President Maduro.

In the courtroom, due to an anomaly of US law, the jury was told that Juan Guaido was the president. While many have criticized Judge Beryl Howell for that ruling, in reality, she was reflecting US law, which says the president determines whom the US recognizes as the leader of a foreign government. This is a political question that the courts cannot overturn. Judge Howell sought to keep politics out of the courtroom, but it was not possible. Taking judicial notice that Guaido is ‘president’ when in the real world he is not made this a political case based on falsehoods.

The judge explained that “elections have consequences” as they grant this and other powers to the president. Judge Howell’s comment was ironic for Venezuelans because they also have elections as they did in May of 2018 where President Maduro won 67 percent in a five-candidate field. That election had more than 300 international election observers who concluded it met all the requirements for democratic elections under international law. Kevin Zeese was in Venezuela for it and reported it was a well-run election far superior to many US elections – especially the Iowa Caucus!

In part because of the limits placed on what we could say in court, none of the embassy protectors testified. The judge’s pre-trial ruling meant we could not tell the whole truth and made it difficult to testify without being held in contempt of court, a situation that Alan Macleod described as “Kafkaesque.” Our lawyers, Michael Satin, John Zwerling, Bill Welch, and Heather Shaner, built our defense on their excellent cross-examination of the three government witnesses.  After the government presented its case, the defense rested without calling any witnesses.

While we hope the prosecutors will not prosecute us again because we are innocent of the charges against us, we are preparing for a second prosecution. It was a victory to have a hung jury in such a manipulated environment but we are not yet free. We hope the Trump administration sees that prosecuting us again will be viewed by the world as further proof of US injustice. Another prosecution raises the stakes for the US as an acquittal or second failed prosecution will be further evidence of the failed coup. As we have always hoped, our goal is for the US and Venezuela to develop positive relations that are based on mutual respect for sovereignty and international law.

The US charade claiming Guaido is the president and the judge refusing to challenge that fiction has dangerous and deadly consequences. The United States violated international laws when it invaded the Venezuelan Embassy in Washington, DC and handed it over to the leaders of a failed coup. The US signaled to other countries that centuries of practices that uphold the inviolability of embassies no longer matter. It also signaled that elections don’t matter. The US believes it can decide who is the leader of another country and hand over the assets of that country to whomever it chooses.

The Venezuelan National Assembly is currently investigating Juan Guaido, particularly his backing by the United States and the theft of Venezuela’s assets. Guaido has already been restricted from traveling out of Venezuela for taking money from foreign countries, a restriction he has defied multiple times. Guaido also violated the Venezuelan Constitution by claiming to be the president, a power that only exists when the elected president and vice president are unable to serve. In the case where the president of the national assembly is required to step in as president, there must be an election for a new president within thirty days.

Guaido is being accused of receiving financial support from Alejandro Betancourt, who is being prosecuted in the United States for laundering billions of dollars. Betancourt is the cousin of Leopoldo Lopez, the head of the right-wing Popular Will Party. Lopez was convicted of inciting violence and escaped last year to seek asylum in the Spanish Embassy. It was recently discovered that Rudy Giuliani met with Guaido’s father and others in Spain and then met with the US Department of Justice to request leniency for Betancourt.

Guaido is also implicated in a case being brought by Venezuela against the United States for “the theft of [Venezuela’s] foreign assets and bank deposits… The looting equals up to US$116 billion.”​​​​​​​ Venezuela recently filed a case in the International Criminal Court for crimes against humanity. The day may come when the United States is held accountable and is no longer allowed to act with impunity.

A major goal of the action to protect the Venezuelan Embassy in Washington, DC was to raise awareness that the US was escalating its lawless actions. Interference in the elections of another country, threats of military invasion and the imposition of coercive economic measures (aka sanctions) are violations of the United Nations Charter. Failing to protect embassies violates the Vienna Convention. The Embassy Protection Collective, composed of hundreds of activists for peace and justice, did prevent the embassy in Washington, DC from being given to the coup-supporters. It is empty today.

The action in the embassy was also an act of solidarity with the people of Venezuela struggling for self-determination and a new society that puts people’s needs and protection of the planet above corporate profits. We have so much to learn from Venezuela about democracy, ending poverty and creating a world for everyone.

As Citizens of Empire, our work is not over. We must continue to oppose sanctions and US intervention in other countries. The San Francisco Labor Council recently passed a resolution opposing sanctions. You can do the same in your community. Urge your local groups, city or county council or other institutions to do the same. And listed below are a few more ways to get involved in the struggle for peace.

Register Now For The United National Antiwar Conference, “Rise Against Militarism, Racism And The Climate Crisis” In New York City From February 21 To 23.