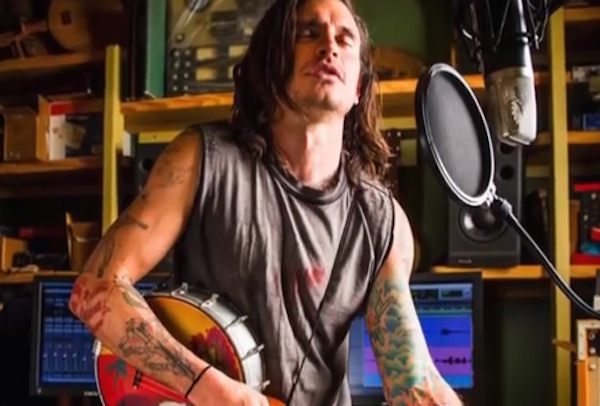 **Staff note: We first met Jacob online in May, 2011 when he was suggested as someone who might like to participate in organizing the occupation of Freedom Plaza in Washington, DC planned for October of that year. He was on his bike trip called “A Ride Til The End” but had taken pause to help in clean up efforts after tornadoes swept through Alabama.

Jacob and his colleagues were planning a bike tour of the East coast called “Bikes Not Bombs” which would make stops along the way to hold public events. This is what he wrote to us about the trip:

“Basically, any place or event where people gather is an opportunity to speak about the senselessness of war.  We’re a creative group of veteran/artists that pride ourselves on presenting palatable dialogue about the occupations to any audience.”

He was excited about the October2011 DC occupation and agreed to carry promotional postcards for it and pass them out along the way. Other groups involved in planning October2011 helped to arrange speaking events for the Bikes Not Bombs tour.

Jacob took a pause in planning the tour during the summer to travel to Afghanistan where he connected with the Afghan Youth Peace Volunteers. Here is a statement he put out in early September about the tour:

“On a bicycle tour beginning in New York City, the riders of “A Ride Till The End” (ARTTE) are sharing a message of peace and discussing the reality of a decade at war. ARTTE rider and Afghanistan veteran Jacob George will be speaking at several events this weekend, including a rally at Ground Zero on September 11. Jacob recently returned from Afghanistan as a peace activist and he will be discussing his work with the Afghan Youth Peace Volunteers and his experience of life on the ground for Afghan people. This portion of the ride is known as the Bikes Not Bombs Bicycle Tour and the purpose is to raise bicycles for veterans. ARTTE will be in New York City from September 8 to the 13 and is available for interview.”

This was our last email correspondence with Jacob in early October before the occupy began as final plans were made for the first night of October2011 on Thursday, October 6.

We’re great!  About to wrap up most of our events with a little sabbatical in Asheville, NC. Also, we’ve been speaking with folks about a March from NYC.  It sounds like fun!  Kinda wish we could go back and do it again. It’s great to hear your gettin a good response, the response around Oct. 6 on our end has been very enthusiastic and the spark on Wall st. has a lot of people interested. Needless to say, we’re excited!Peace Jacob

Jacob performed the first night in Freedom Plaza and the Afghan Youth Peace Volunteers joined us by Skype. It was a powerful beginning to the October2011 occupation.

Here are some photos:

Jacob touched many people during his brief time on Earth. He will be remembered and loved.  Please donate to the fund for the upcoming celebration of his life. CLICK HERE TO MAKE A DONATION. Any amount will help.

Rest in Peace Jacob. We love you.

Last week “bicycle ridin, banjo pickin, peace rambling hillbilly from Ouachita Mountains of Arkansas” Jacob David George died as a result of moral injuries sustained in Afghanistan. Jacob joined the US Army before the attacks of 9/11. He served three tours of Afghanistan (2001, 2002, 2003/4) and came back a changed man. He said that after witnessing wholesale slaughter and picking through body parts he was affected by Post Traumatic Stress. He understood that to be profoundly affected by war was not a disorder. Jacob often talked about the moral component of PTS, the trauma caused by taking part in or witnessing events that are contrary to your very being. This is different to the PTSD of the military psychiatrist who is interested in events that put the individuals own life in danger. This is the opposite, it is trauma caused by harming others. Jacob advocated for healing rituals and ceremonies to come to terms with the trauma of war. He talked about the need to heal the soul as well as the brain. He described throwing his medals back to the US Government during the 2012 NATO protests in Chicago as the most therapeutic thing he had done. The following is a poem written by Jacob that he later turned into a song.

“We just Need to support the troops” is what they tell me well,
This is from a troop so listen carefully,
What we Need are teachers who understand the history of this country,
What we Need is a decent living wage, so people ain’t cold and hungry,
What we Need is bicycle infrastructure spanning this beauteous nation.

Now, it’s true the troops need support,
The support to come home,
They need treatment and jobs and love for the soul,
See, war ain’t no good for the human condition,
I lost a piece of who I was on every single mission,
And I’m tellin’ you, don’t thank me for what I’ve done,
Give me a big hug and let me know we’re not gonna let this happen again,
Because we support the troops and we’re gonna bring these wars to an end.

In the USA 22 veterans kill themselves every day. In 2012 more UK soldiers and veterans killed themselves than were killed in Afghanistan. In the USA 30% of veterans have considered suicide. More veterans of the Falklands War have committed suicide than were killed in action. The suicide rate among veterans in the USA is double that of the civilian rate. These statements are controversial not because they overestimate the problem but because these figures do not include the veterans who drink themselves to death. The veterans who no longer care for their own well being and drive cars into trees or the veterans who die homeless on the streets. To admit the scale of the problem would be an admission that war is harmful to those who take part in it long after returning home.

In memory of Jacob David George and in solidarity with our brothers and sisters in the USA please consider donating to the Jacob George Celebration of Life Fund which will help pay for a celebration/memorial event on Sunday 5 October in Fayetteville, Arkansas.

Video of Jacob at First Unitarian Church in April, 2013