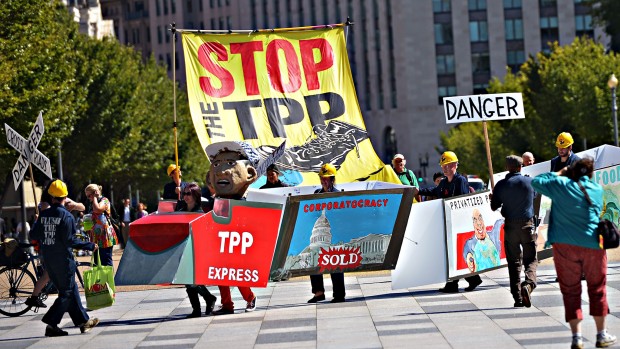 Another Corporation Suing Our Government Thanks To Trade Agreements

Above Photo: Demonstrators protesting against the Trans-Pacific Partnership (TPP) are seen on Pennsylvania Avenue, near the White House, on September 24, 2013 in Washington, DC. The TPP is a proposed free trade agreement being negotiated by  Australia, Brunei, Canada, Chile, Japan, Malaysia, Mexico, New Zealand, Peru, Singapore, the United States and Vietnam. AFP PHOTO/Mandel NGAN

A Canadian corporation is suing the us because we wouldn’t let them build a pipeline across our country (seizing people’s property along the way) so they could sell oil to China.

They can do this because we signed a trade agreement that places corporate rights above our democracy. The Trans-Pacific Partnership (TPP) would increase by an order of magnitude the companies that can sue us for hurting their profits by protecting the environment, consumers, public health and small businesses.

TransCanada Corporation is suing the U.S. government (us) for $15 billion in damages under North American Free Trade Agreement (NAFTA) rules. The company wanted to build the Keystone pipeline all the way from Canada to the Gulf of Mexico so they could ship oil to China. They also wanted to use “eminent domain” to seize land from ranchers, farmers and other property owners along the way to enable this.

Why can they do this? In 1993, President Bill Clinton signed NAFTA and on January 1, 1994, the United States officially became a party to the agreement. Chapter 11 of the agreement “protects investors” by allowing them to sue governments that pass regulations or laws that hurt their profits. They can bypass the legal systems of these governments and take the issue to “corporate courts” in which corporate attorneys decide if the corporation or the government will prevail.

Bloomberg has the story, in “TransCanada Files $15B NAFTA Claim on Keystone XL Rejection“:

TransCanada Corp. is seeking to recoup $15 billion for the Obama administration’s rejection of the Keystone XL oil pipeline, in a legal claim that highlights how foreign companies can use trade deals to challenge U.S. policy.

The Calgary-based pipeline operator filed papers late Friday seeking arbitration under the North American Free Trade Agreement, arguing that TransCanada had every reason to believe it would win approval to build Keystone XL. Instead, President Barack Obama last November determined that the pipeline, which would have carried Canadian oil sands crude to the U.S. Gulf coast, wasn’t in the national interest. In response, TransCanada in January vowed to use arbitration provisions in Chapter 11 of NAFTA to recover costs and damages.

The President of the United States decided that this project is not in the national interest. But “investor protection” provisions of trade agreements override our national interest. So we have to pay a company for not letting them seize public and private land to build a pipeline across our entire country so they can sell oil to China.

The investor-state dispute settlement provision of the TPP was among the main targets at Tuesday’s “Trading Up’ symposium on trade at the AFL-CIO headquarters in Washington.”

Both AFL-CIO President Richard Trumka and Sen. Sherrod Brown (D-Ohio) singled out the ISDS, which Brown said “allows corporations to sue governments to pad their own profits,” as a key reason to oppose the TPP and replace it with a new trade regime that respects the interests of the people who governments are supposed to represent.

Thomas Palley, economist at the New American Foundation, said at the symposium that of provisions like the ISDS that do not really have anything directly to do with trade, agreements like the TPP “are not free trade agreements; they are global governance agreements.”

Calling them “global governance agreements,” he went on to say, would call attention to the enormity of the effect these clauses would have and would underscore the undemocratic way they are being imposed on populations around the world as well as the U.S.

Under NAFTA, we recently lost the right to, for example, tell consumers which country their meat comes from or whether tuna is dolphin-safe. Canada has been sued over their environmental laws. One company was even able to win $15 million and block Canada from stopping them from polluting the air with neurotoxins.

Under other trade agreements with similar provisions counties are being sued by tobacco companies for trying to help people stop smoking, and prevent kids from starting.

These “investor protection” provisions prevent governments from protecting the environment and the climate. For example, TransCanada claims that the U.S. choice to protect the climate cost them money, so we have to pay up. As economist Joseph Stiglitz said by video at the Trading Up symposium, instead of the “polluter pays” principle in U.S. law, “we pay the polluter for not polluting.” Or, worse, we pay the polluter for the right to keep polluting.

From the Bloomberg report:

The company said the U.S. spent seven years delaying a final decision on the project with multiple rounds of “arbitrary and contrived” analyses and justifications.

“None of that technical analysis or legal wrangling was material to the administration’s final decision,” TransCanada said in Friday’s filing. “Instead, the rejection was symbolic and based merely on the desire to make the U.S. appear strong on climate change, even though the State Department had itself concluded that denial would have no significant impact on the environment.”

NAFTA covers just three countries, Mexico, Canada and the United States. The TPP starts with12 countries, but it is a “docking agreement,” which means more and more countries can sign on as corporate power grows and is able to force them to do so. This means the number of corporations that can sue governments for hurting profits by protecting citizens and the environment grows exponentially.

“TransCanada’s attempt to make American taxpayers hand over more than $15 billion because the company’s dirty Keystone XL pipeline was rejected shows exactly why NAFTA was wrong and why the even more dangerous and far-reaching Trans-Pacific Partnership must be stopped,” Brune said in an emailed statement.

“The TPP would empower thousands of new firms operating in the U.S., including major polluters, to follow in TransCanada’s footsteps and undermine our critical climate safeguards in private trade tribunals,” Brune said.

The lesson here is that we must do everything we can to fight the TPP, and demand our government renegotiate the rest of the “trade” agreements the corporations got us into. But this time the agreements must be negotiated with labor, environmental, consumer, human rights and all other “stakeholder” groups at the table.