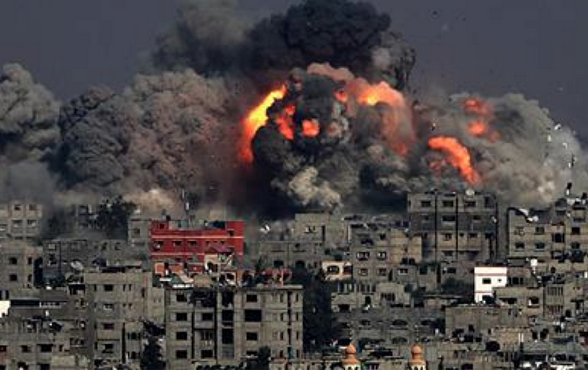 Another Gaza Freedom Flotilla Is Ready To Sail

With the 51 day Israeli attack on Gaza in the summer of 2014 that killed over 2,200, wounded 11,000, destroyed 20,000 homes and displaced 500,000, the closing to humanitarian organizations of the border with Gaza by the Egyptian government, continuing Israeli attacks on fishermen and others, and the lack of international aid through UNWRA for the rebuilding of Gaza, the international Gaza Freedom Flotilla Coalition has decided to again challenge Israel’s naval blockade of Gaza in an effort to gain publicity for the critical necessity of ending the Israeli blockade of Gaza and the isolation of the people of Gaza.

Palestinian boys attend Friday prayers as they sit at the remains of a house that witnesses said was destroyed by Israeli shelling during a 50-day war last summer, in the Shejaia neighbourhood east of Gaza City January 23, 2015.

UNRWA, the main U.N. aid agency in the Gaza Strip has stated that a lack of international funding forced it to suspend grants to tens of thousands of Palestinians for repairs to homes damaged in last summer’s war.

“People are literally sleeping amongst the rubble, children have died of hypothermia,” Robert Turner, Gaza director of operations for the United Nations Relief and Works Agency (UNRWA), said in a statement. He said UNRWA received only $135 million of the $720 million pledged by donors to its cash assistance program for 96,000 refugee families whose homes were damaged or destroyed in the 50-day conflict between the Hamas government and Israel. Little of the total $5.4 billion pledged for Gaza’s reconstruction at a Cairo conference of international donors in October 2014 has reached the Gaza, and thousands of Palestinians have been sheltering in tents near destroyed homes.

“Thousands more have been living in damaged buildings, using plastic sheeting to try to keep out the rain. Around 20,000 displaced are still being housed in U.N.-run schools.”

While we recognize that funds are needed to rebuild Gaza, we feel that the publicity from another flotilla will help gain attention to the plight of the people of Gaza in ways that other initiatives may not.  Indeed, governments are forced to react to the flotillas as evidenced through the diplomatic cables obtained by the Center for Constitutional Rights from the U.S. Department of State to U.S. missions in the Middle East region.

At a December, 2014 meeting, the Gaza Freedom Flotilla Coalition decided to sail a 3-ship flotilla to challenge the blockade in the first half of 2015. Twenty passengers will be aboard each of the 3 ships for a total of 60 passengers.  The coalition will seek representatives from 30 countries with each country having two passengers. The U.S.- Palestinian Solidarity community will participate in Gaza Freedom Flotilla 3 and has a target of $20,000 as their part for renovation expenses and to be able to have two persons as the U.S. delegates.

Nonviolence International of Washington, DC, the 501(c)(3) for U.S. contributions to Gaza’s Ark, is the 501(c)(3) organization. Please make an online contribution here and indicate “Gaza’s Ark/Gaza Freedom Flotilla 3” in the Please designate this gift for a specific purpose “Designation Code” box. Checks payable to “Nonviolence International” (with Gaza’s Ark/Gaza Freedom Flotilla 3 in the memo line) may be mailed to: