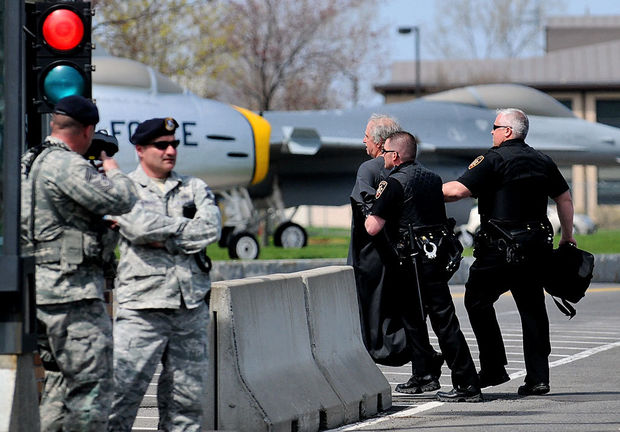 Jack Gilroy of Binghamton, NY was convicted after a two-day jury trial in DeWitt Town Court of charges stemming from his arrest during a nonviolent protest at Hancock Air National Guard Base on April 28, 2013.   Jack was convicted of Trespass, a violation, and Obstructing Governmental Administration, a misdemeanor by a jury of five women and one man.   He will be sentenced by Judge Robert Jokl on October 1st, a year and a half after his arrest.  The sentence for the latter charge may be up to one year in jail and a fine of $1000.    Jack’s Order of Protection was also reissued today as a 2 year Permanent Order protecting Commander Greg Semmel, the commanding officer at Hancock Base.
Jack testified that he joined the Army out of high school, and was stationed in Austria in the early 50s at a time when the Cold War was hot.   He says that despite a climate of distrust and contempt towards Russians, when he actually had to look a young Russian soldier in the eye during a ceremonial event, he didn’t see the evil he’d been trained to expect. Since then, Jack has spent 30 years as a teacher.   A member of Veterans for Peace and Peace Action New York, Jack is currently working with Peace Action at Binghamton University to convince the college to offer a Peace Studies Program.
Regarding the April 2013 protest, Jack testified that the boundaries of the base were unclear and unmarked at the time.  He said his intention was to send a message to base personnel and the public, not to disrupt the operation of the base.  Only one gate was affected by the symbolic die-in he participated in, which blocked the inbound lane of the access road. Jack was arrested and removed 30 seconds after lying in the road so he had little effect on potential base traffic.
Hancock Air National Guard Base, home of the 174th Attack Wing, is a domestic hub for MQ-9 Reaper drone support.  It is a training site for pilots and technicians, a drone test location and an active site in the ongoing wars overseas.  Heavily armed Reapers piloted at Hancock fly lethal missions over Afghanistan and possibly elsewhere.   Hancock pilots also fly test flights from Fort Drum over Lake Ontario.
Upstate Drone Action has been protesting the Drones at Hancock Base since 2009 with bimonthly vigils, annual rallies and a Gandhian Wave of civil resistance.  Mary Anne Grady Flores was convicted of violating an Order of Protection by standing in the road in front of Hancock Base and sentenced on July 9 to one year in prison.  There are 11 trials scheduled for Hancock protesters in DeWitt between now and next July stemming from the April 28 protest.   Several more trials are pending.   On July 30th and 31st Russell Brown will be tried pro se, serving as his own defense council, on the same charges Jack Gilroy faced today.
For more information go to upstatedroneaction.org
PDF available at: http://upstatedroneaction.org/documents/PressReleases/Jack-Gilroy-Press-Realease.pdf