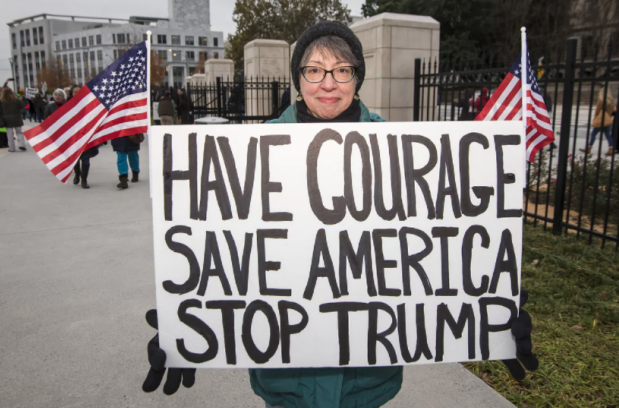 Another, More Beautiful America Is Rising. Trump Will Be Resisted

Above Photo: An anti-Trump protest in Atlanta. ‘Many people are still trying to figure out what to do; others are doing it.’ Photograph: Zuma/Rex/Shutterstock

American people will stand up for ideals of humanity, from lawyers and tech workers to the Californian senate

The time when you don’t need hope is when your hopes have been fulfilled. Hope is for when you don’t have what you need and for when things are not OK. It is the belief that liberation might be possible that motivates you to make it more possible, and pursuing hope even when it doesn’t lead to the ultimate goal can generate changes that matter along the way, including in yourself.

A dozen years ago I talked about hope to a roomful of working-class community college students in Washington, citing the German philosopher Ernst Bloch to the effect that without hope there is no action but without action there is no hope. A woman said in a clear voice that she agreed, because if she had not hoped she would not have struggled and if she had not struggled she would not have survived Pol Pot and the Cambodian genocide.

That floored me. Sometimes hope is just that you will survive, or that you will escape. Then you can hope for more. I wish I knew her story, but that she was in North America, alive and well and confident enough to speak out, told me something of it. Even despotic regimes end, though it’s important to remember that not everyone and everything survives; you can be devastated for what won’t and hopeful for what will at the same time.

In the United States we are probably headed for a very grim phase of uncertain duration. We will see much that we love under attack – but it’s worth remembering that a lot of this is nothing new. From oil pipelines to human rights, there have been massive incursions over the past 16 years against nature, against equality, against governmental transparency. We are not exiting a utopia, and human rights organisations that are currently rising to a greater challenge have not been idle for lack of work in the Obama era.

The Bush years are not far behind us, and though more predictable, it was plenty brutal. May Boeve, executive director of 350.org, told me that after the recent US presidential election, her colleagues in Turkey sent their sympathy and said they got good work done on climate change, even under authoritarianism. We will have much work to do and we will still have the capacity to do it. It will matter more than ever that we do.

We would do well to study the countries that have sunk into tyranny or despotism and survived. To discover how Argentina and Chile and Brazil went through an era of dictators and death squads and emerged, in part because people like the Argentinian women in las Madres de la Plaza de Mayo stood up to their fears and their regime. El Salvador is now governed by the FMLN, which fought against the death squads in the 1980s, and Chile’s current president is Michelle Bachelet, who was kidnapped and tortured under the Pinochet regime. Most of the countries in our hemisphere besides Canada have gone into horror and emerged, many more than once.

The difference is one of scale. A Filipino climate activist friend of mine begged Americans to stop Donald Trump on the grounds that the tinpot despot in charge of his country has a largely local impact but the president of the US has a global impact on everything from human rights to climate policy around the world. We have a responsibility not just to our country but to the world to contain and weaken and try to defeat Trump and Trumpism to the best of our abilities. Those of us who are not in immediate peril have a grave responsibility to those who are.

But in the wake of this terrible election, much of my hope has rested not on what could or should happen, and not what the historical record tells us has happened, but what is happening now. There is another America rising and taking action, and it is beautiful. I’m thinking of the many stories of people standing up for the vulnerable, directly when they intervene in confrontations with haters. Or indirectly, as with the young woman I know who co-organised the creation of Neveragain.tech, a public oath people working in tech can take to refuse to create Muslim registries, turn over people’s private data, or otherwise cooperate with state persecution.

They give me hope, in some portion of humanity, the portion that will resist Trump and defend our ideals

Of the California state senate, which immediately after the election issued a manifesto of defiance: “California will defend its people and our progress. We are not going to allow one election to reverse generations of progress at the height of our historic diversity, scientific advancement, economic output, and sense of global responsibility. We will lead the resistance to any effort that would shred our social fabric or our constitution.”

I’m thinking of the many action groups and coalitions that came together in the wake of the election determined to stop Trump, defend civil liberties and address the illegitimacy of the election, and of the candidate. The Harvard lawyers laying the case for impeachment on the grounds of the “emoluments” or profits from overseas that would fatally compromise a Trump regime.

Many people are still trying to figure out what to do; others are doing it. They give me hope, in some portion of humanity, the portion that will resist Trump and defend our ideals. It will be hard. It will be ugly. Our job will be to be embody and protect all of those things most antithetical to authoritarianism, racism, misogyny, kleptocracy, an atmosphere of lies and indifference to science, fact and truth.

In easy times, we grow slack; this will require us each to find our capacity for heroism. Some will, and my hope lies with them. Or us.