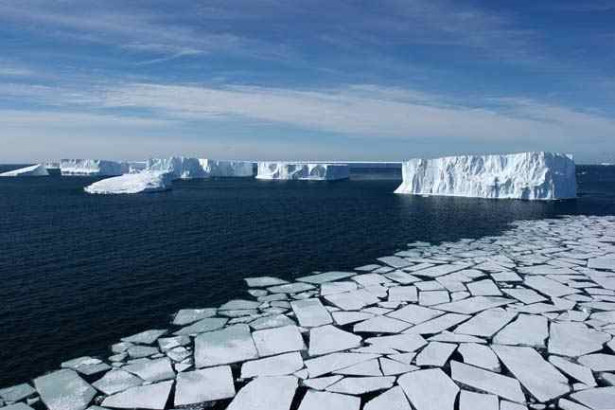 One of the biggest icebergs in recorded history, in both area and volume, broke off from the Antarctic East Peninsula and floated free sometime between Monday and early Wednesday morning. The ice mass separated from the Larsen C shelf in a process known as calving. Its surface area of roughly 2,550 square miles (5,800 sq. km) and average thickness of about 650 feet makes it the third largest iceberg ever recorded. The iceberg, designated as A68, has been tracked by scientists for several years and was expected to calve.

The iceberg is comparable in size to the state of Delaware and is now drifting towards the Weddel Sea. As water and wind forces push it into the Southern Ocean, it will further break apart and melt as wave and wind forces move it against warmer ocean currents. This process may take years.

The massive A68 iceberg will not significantly cause ocean rise because it is already over water where 90% of it is submerged. But it does mark what scientists have long feared could be the beginning of an acceleration of ice flow from glaciers behind it from the eastern side of the Antarctic peninsula. It is those glacial ice flows that will cause ocean rise, because the ice melt there is over land and would add to sea levels. There are seven major glaciers behind the Larsen C shelf. 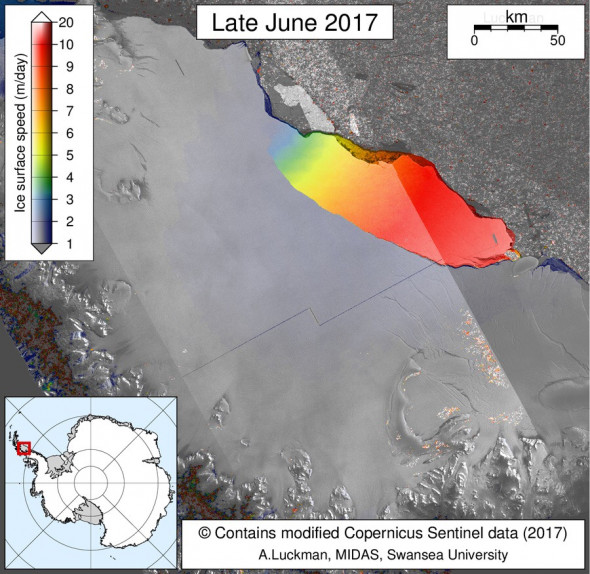 The massive iceberg, designated A68, broke off from the Larsen C shelf between Monday and Wednesday. Image courtesy of Adrian Luckman

Ice shelves such as the Larsen shelf rest over open water but as long as they remain attached to the Antarctic land mass, they act like barriers to hold back glacial ice flow from land. And as the Larsen shelf segments calve, there is less resistance to hold back the resulting glacial ice flow into the open sea.
Scientists have already recorded accelerations of glacial ice movement from the Antarctic Peninsula in areas behind where the Larsen A and B calving events took place.

NASA reported an eight-fold acceleration of glacial ice off the eastern Antarctic Peninsula after the Larsen B shelf broke away. There are three glaciers behind the Larsen B shelf. One of those, the Flask Glacier had accelerated from its original speed by eight fold after Larsen B broke up. This is comparable to a car going from 55 to 440 mph, according to the published report.

Even though the Larsen C iceberg is very large in surface area, there is still much of the ice shelf left behind it. Usually, only one-tenth of an iceberg is exposed above water, so photographs taken of such a large ice structure cannot capture the actual size.

Is Break-Off Evidence of Climate Change?

The Larson C iceberg has a weight of a trillion tons, Dr. Adrian Luckman, professor of glaciology and remote sensing at Swansea University, said by email. Dr. Luckman, who has been to the Antarctic twice for fieldwork on the Larsen C ice shelf, said, “Larsen C ice shelf has been losing area since it was first mapped, and the imminent calving will leave the ice shelf at its most retreated known position.”

Dr. Luckman has been working on the MIDAS project, a UK-based Antarctic research project, investigating the effects of a warming climate on the Larsen C ice shelf in Antarctica. But he was not so quick to link the Larsen C iceberg as “direct” evidence of climate change. He indicated there are many factors involved in calving and the answer to whether or not the event was due to climate change “is not simple,” he said.

“In satellite images of the 1980s, this rift was clearly already a long established feature, calving events are part of the natural cycle of ice shelves, and there is no direct evidence to link the rift’s growth to climate warming. I would say it is too early to blame human climate change for this event,” he said.

Video of Larsen B calving

But Dr. James Hansen, a leading climatologist who worked for NASA for 32 years, has linked ice melt in the Antarctic to climate change. Two years ago, he published a paper with 18 other climatologists, projecting polar ice melt would increase 10 times faster than previously expected and raise ocean levels by 10 feet in 50 years. This is far faster than previous consensus on the subject. Dr. Hansen based his projections on models showing accelerating global climate changes connected to a 2-degree-Celsius rise in average global temperatures. 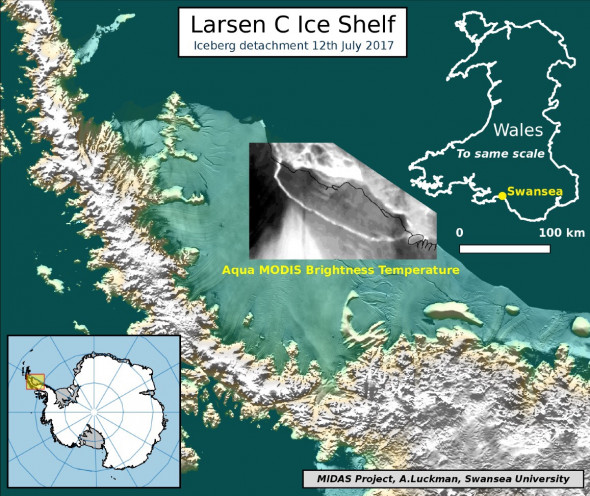 Scientists have been monitoring the slow calving of the giant iceberg for several years. Image courtesy of Adrian Luckman

Other indicators such as warming ocean temperatures and a steady increase of the average Antarctic temperature have led Dr. Hansen to conclude that feedback loops are accelerating the melting of ice shelves there.

“Meltwater tends to stabilize the ocean column, inducing amplifying feedbacks that increase subsurface ocean warming and ice shelf melting. These feedbacks make ice sheets in contact with the ocean vulnerable to accelerating disintegration,” wrote Hansen.
The Antarctic temperature has risen an average of one degree F each decade in the last 40 years (+3 degrees C). It is this temperature rise which is linked to overall surface ice loss by an increase of 75% in the last ten years.

Dr. Luckman credits advances in satellite surveillance with enabling scientists to monitor changing conditions in the Antarctic. “We have only recently had the tools to monitor such events with this frequency and precision. The European Space Agency satellite mission, Sentinel-1, allows high resolution imaging and analysis every 6 days through winter and summer, night and day,” he said.

Such tools will become even more important for monitoring climate changes as there are plans for budget cutbacks at NASA for traditional sources of climate data.

The A68 iceberg accounts for 10 percent of the Larsen C shelf in that region, meaning there is still much of the shelf remaining.  Therefore the remaining part of Larsen C is still acting as a barrier to prevent acceleration of glacial ice flow.

But it could signal more iceberg calving to come, according to Dr. Luckman. “There is the possibility that Larsen C will follow the example of its former neighbour, Larsen B, and continue to be eroded until it collapses completely,” he said.