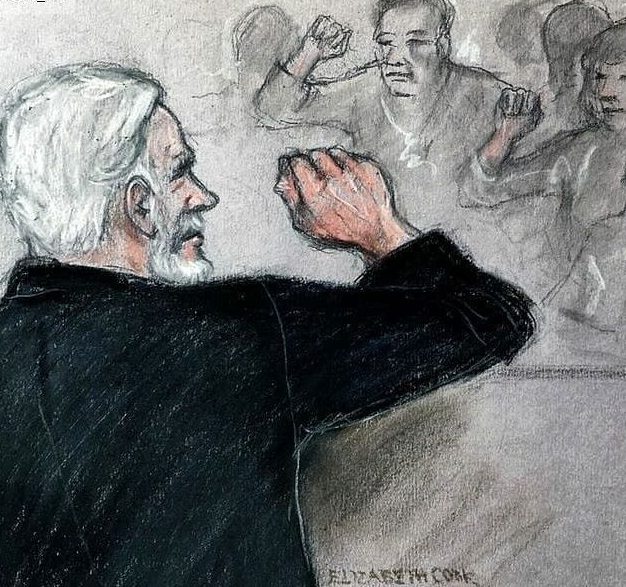 Julian Assange raises the fist of solidarity to people in the courtroom, October 21, 2019. By Elisabeth Cook.

London – On October 21, 2019, Julian Assange appeared in court for an extradition hearing. Assange is being held in a British jail pending extradition to the United States after having served his sentence for skipping bail when he was given asylum in the Ecuadorian Embassy to avoid extradition. The court has refused his release pending the extradition hearing and denied him access to computers making it difficult for him to defend himself.

Assange fled to Ecuador’s embassy in 2012 to avoid being sent to Sweden for an investigation of manufactured charges being used to imprison him so he could be extradited to the United Staes. He faced a sex crimes investigation, which is highly suspect and has never resulted in charges despite three investigations. Assange spent seven years in Ecuador’s embassy before he was dragged out with Ecuadorian President Lenin Moreno’s consent in April. He now faces 18 counts in the United States.

It is evident from this hearing that Assange is being railroaded and is not receiving due process for an alleged crime that should not exist, i.e. being an editor and publisher that told the truth about US war crimes and other illegal actions, as well as the corporate control of US foreign policy. Assange is facing up to 175 years in prison on more than a dozen charges related to WikiLeaks’ publication of classified documents that exposed American war crimes and its corrupt corporate-dominated foreign policy. Popular Resistance has supported Julian Assange for his journalism and Chelsea Manning for whistleblowing and refusing to testify against Assange. Both need to be released and the charges against Assange dropped.

#Assange and #ChelseaManning had the courage to show the world the truth about #Iraq war. Today they are in danger. Anyone claiming they are anti war should support them. Today Assange court verdict in #UK was an Attack on each one of us. If wikileaks lose then warmongers win!

Assange arrived for the hearing in a van. There were numerous supporters outside as he arrived but he was driven into a garage with0ut people seeing him. 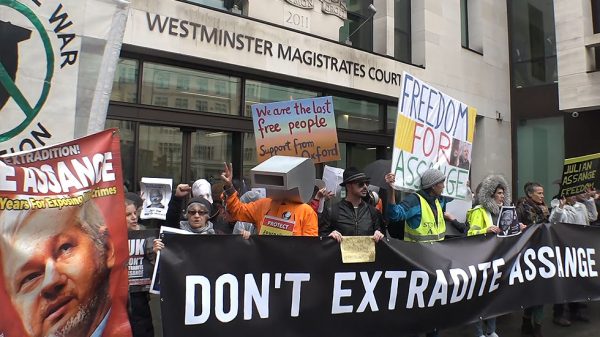 His mother commented on her son’s appearance in court and the extradition he is facing on Twitter:

This breaks my heart!

They are breaking my beautiful bright, brave journalist son, the corrupt bastards!#STOPtheTORTURE#FreeAssangeNOW#NoUSExtradition https://t.co/4xV7d8g3I4

My son Julian Assange is facing a US Extradition hearing in London on Oct 21.

If extradited he likely to be sentenced to 175 years in prison,

for the “crime” of multi-award JOURNALISM revealing US war crimes.

Others expressed rage at the injustice of the court proceedings being used as a weapon against Assange, not an instrument of due process and justice. The court is not even trying to pretend it is being fair.

Assange Case – I am trying to write a report of what I saw in Westminster Magistrate’s Court today, but my hands keep shaking with rage, frustration and sadness to the point I can’t type, and my heart keeps going into atrial fibrillation. I have got mysel https://t.co/n1g4wiA3dm

John Pilger outside Westminster court denounced the brutal treatment of Assange as the actions of a “rogue state”@SEP_Britain#DontExtraditeAssange pic.twitter.com/mhOnvu62NL

The silence of corporate media outlets and journalists is being noticed. Their cowardice is suicidal. If the Espionage Act is used against Assange successfully, it will be available for use against all journalists. They will either have to bow down to the government and not report on corruption and war crimes or risk prosecution. The Assange prosecution is an attack on Freedom of the Press and the people’s right to know. The Assange case will define Freedom of Speech and Press in the 21st Century.

All those who believe power should be challenged by whistleblowers and journalists should speak out against the US attempt to extradite #JulianAssange, and against his continued incarceration. https://t.co/yfjhfzaSQN

Corporate journalists face a choice on Assange persecution: stay silent and acquiesce in undermining their own profession or take a stand to back truthtelling.

But watch as most do the former: they prefer to serve power than challenge it and don’t truly care abt truthtelling. https://t.co/vayd8inJY1 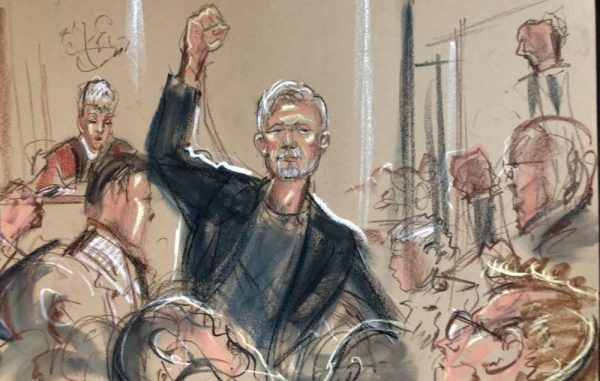 Julian Assange turns to the crowd in court on October 21, 2019, raises fist and shows solidarity.

People did get to see Assange in court.

Julian Assange is in the dock at Westminster Magistrates Court, he looks thinner than his last appearance, dressed in a navy suit, clean shaven, just raised his fist to supporters @9NewsAUS 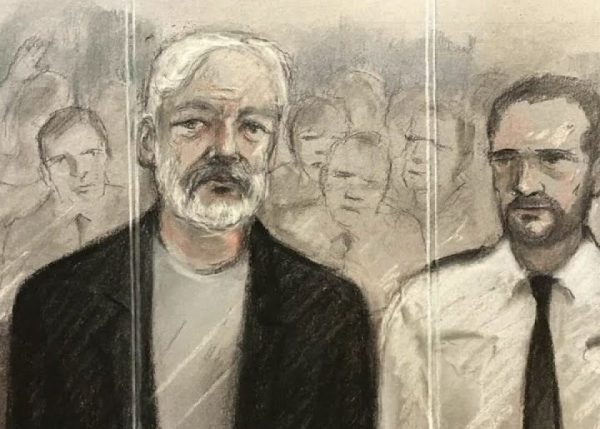 His attorney, Mark Summers, told the court that Assange was spied on in the embassy, including conversations with his lawyers. Reuters reports:

Summers said the U.S. government had been listening to conversations between Assange and lawyers while he was in the Ecuadorean embassy in London from 2012 to 2019.

He said there was a criminal case in the Spanish courts allegedly involving Spanish contractors used by the U.S. government and that hooded men broke into offices, without giving details.

“This is part of a concerted and avowed war against whistleblowers including investigative journalists and publishers,” Summers said.

He argued that his team needed more time to gather and provide evidence, saying the challenges in this case would test the limits of most lawyers and citing the difficulty of communicating with Assange who doesn’t have a computer in jail.

Assange is the first publisher or editor charged under the Espionage Act, which was designed for traitors and is being misapplied to a journalist. The charges against him are a political attempt to silence journalists and publishers, and the fake Swedish allegations were part of a plot to incarcerate him for US prosecution.

Summers called the USextradition “a political attempt to signal to journalists the consequences of publishing information.” He described the prosecution as a war on journalis saying “It’s legally unprecedented. This is part of an avowed war on whistleblowers to include investigative journalists and publishers.”

Reuters reported that Assange mumbled and stuttered for several seconds as he gave his name and date of birth at the beginning of the hearing.  When “the judge asked him at the end of the hearing if he knew what was happening, he replied ‘not exactly,’ complained about the conditions in jail, and said he was unable to ‘think properly.'”

“Its very difficult where i am” Wikileaks founder Julian Assange in tears as he speaks in court https://t.co/Pr6nyL9RaBpic.twitter.com/dDYyu9wLvj

Assange, who is an experienced speaker, a free thinker and an expert in processing large quantities of information, would be PERFECTLY capable to defend himself in court without even needing legal assistance. What the hell are they doing to our brother?#Anonymous#FreeAssangepic.twitter.com/ECS6aOlYQm

#Assange supporters worried for his health after seeing him in courtroom pic.twitter.com/WlTbOxaZ2t

Assange understands he is going through an unfair hearing that does not allow him to defend himself saying to the judge: “I don’t understand how this is equitable. I can’t research anything, I can’t access any of my writing. It’s very difficult where I am.”

Amnesty International has called for Assange not to be extradited to the United States.

Extradition of Julian Assange to the United States must not go ahead – Amnesty International Australia https://t.co/favWoPDULn 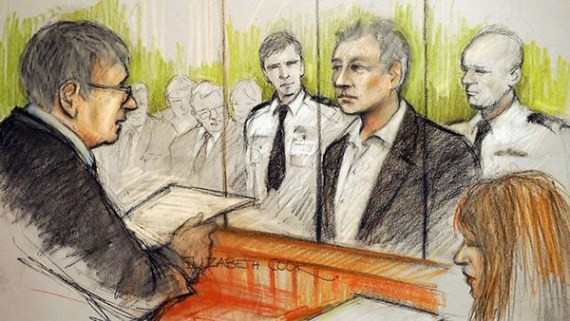 Assange faces the judge in court on October 21, 2019. Courtroom sketch shows Assange is melancholy, his shoulders heavy, represented behind bars and flanked by police. By Elizabeth Cook.

The judge refused to delay the hearing in the case when Assange’s lawyer, Mark Summers, argued that Assange’s extradition hearing, scheduled for February 2020, should be delayed by three months due to the complexity of the case. The judge showed there is a goal in this courtroom — the rapid extradition to the United States where he will face an unfair trial in Alexandria, VA, known as the ‘rocket docket’, where national security cases are held.

WikiLeaks founder Julian Assange loses bid to delay extradition hearingshttps://t.co/LhERPouaHE. Why give him all that time. ?? pic.twitter.com/bMV72V7sMa

Summers said the U.S. government had been listening to conversations between Assange and lawyers while he was in the Ecuadorean embassy in London from 2012 to 2019.

He said there was a criminal case in the Spanish courts allegedly involving Spanish contractors used by the U.S. government and that hooded men broke into offices, without giving details.

“This is part of a concerted and avowed war against whistleblowers including investigative journalists and publishers,” Summers said.

He argued that his team needed more time to gather and provide evidence, saying the challenges in this case would test the limits of most lawyers and citing the difficulty of communicating with Assange who doesn’t have a computer in jail.

The crowd of supporters remained through the hearing and cheered Assange as he left.

Protesting at the van taking Julian Assange away from court today. In solidarity as he goes back to Belmarsh prison.#freejulianassange@wikileakspic.twitter.com/fACQPcAyZJ

Protesting at the van taking Julian Assange away from court today. In solidarity as he goes back to Belmarsh prison.#freejulianassange @wikileaks pic.twitter.com/fACQPcAyZJ