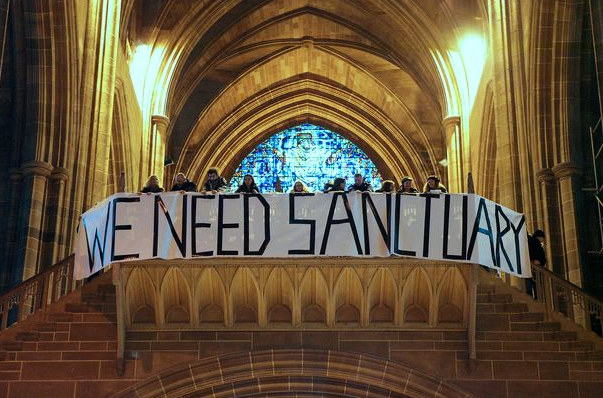 The group of around 20, including some children, protested near the altar at the front of the church.

They came with a banner which read “We Need Sanctuary”, which they hung from a balcony high up in the cathedral.

They want the church to speak out against austerity, and a repeat of 1985’s “Faith in the City” report into urban poverty.

“There’s massive wealth division, it’s not being touched upon. People are killing themselves, and we need sanctuary.”

The cathedral said it understood the issues campaigned on by the group but did not condone their actions.

A spokesman said: “A small peaceful protest to raise the issue of government cuts was held at Liverpool Cathedral.

“Our staff worked hard to ensure this was not too disruptive for worshippers and visitors and the protest group left at 6pm.

“While we understand the issues of the group we do not condone action of this type in this building.

“The church has a strong tradition of speaking up for vulnerable people and will continue to do so however as a cathedral we remain committed to making our building a place of prayer, worship and welcome.”