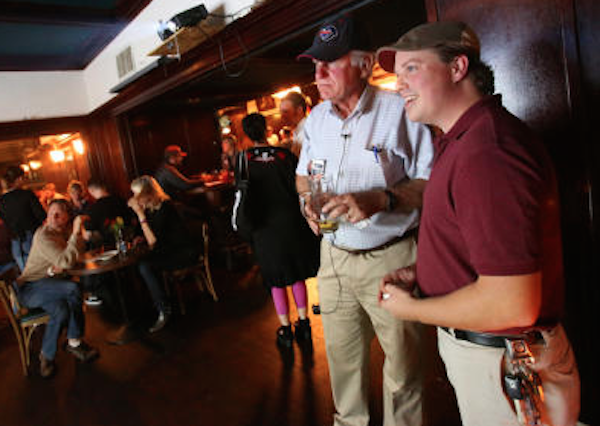 RICHMOND, CA. Election day, 2014, was not ending well for Nat Bates, a mayoral candidate in this largely non-white city of 100,000 long dominated by Chevron. The small crowd of supporters gathered in his storefront campaign headquarters on Macdonald Avenue was beginning to look rather glum. The big box cake, with white icing and lettering proclaiming Bates to be “Our Mayor,” remained unwrapped.

The 83-year old African-American Democrat, who has been Big Oil’s best friend on the city council, had every reason to expect early returns much better than the numbers his campaign manager was posting on the wall by 10:30 p.m. on Tuesday evening.

Nat Bates gazed down on the citizenry from countless billboards, like a ubiquitous successor to “Big Brother” in George Orwell’s dystopian novel, 1984.  His ads popped up on the inter-net, on local TV and radio stations; large numbers of Richmond voters got YouTube videos featuring his homilies.  On election day, the Bates campaign—or Moving Forward, Chevron’s PAC– deployed paid canvassers and sign-holders, plus free rides to the polls. An impressive number of Richmond residents sported “Bates for Mayor” signs on their lawn.

Most helpful of all, Moving Forward spent much of its $3.1 million budget attacking candidates fielded by the 10-year old Richmond Progressive Alliance (RPA). (For details on Big Oil’s carpet-bombing of the electorate with green-and red-baiting mailers, see http://www.beyondchron.org/chevron-sounds-alarm-east-bay-anarchism/)  Banding together as “Team Richmond,” termed-out Mayor Gayle McLaughlin, Vice-Mayor Jovanka Beckles, and Planning Commissioner Eduardo Martinez urged voters to create a stronger progressive majority in city government by electing their slate, Tom Butt for mayor, and Jael Myrick to a fourth open council seat. RPA refuses to accept any donations from business, large or small. While frequently allied with RPA members on key council issues, like making Chevron’s Richmond refinery safer, Butt and Myrick have yet to take that pledge.

The scale of Chevron’s own spending–to defeat low-budget municipal candidates–was so jaw-dropping that it drew national media attention. From Bay Area newspapers and The L.A. Times to Bill Moyers and Rachel Maddow and a visiting U.S. Senator from Vermont, Bernie Sanders, everyone agreed that Richmond was ground zero for corporate-funded negative campaigning in the post-Citizens United era. Maddow, among others, feared that Big Oil’s unrestricted spending here would be “crude but effective.”

Meanwhile, as they have done in previous election cycles, friends of Nat Bates in the Black American Political Action Committee (BAPAC), the Richmond Business PAC, and a group called Black Men and Women (BMW) joined the hit-piece pile-on, in more low profile fashion. One of their mailers derided the RPA slate, Butt, and Myrick as the “Richmond Plantation Alliance”—even though 3 of the 5 candidates so described are black and/or Latino. BAPAC urged voters to elect the “independent thinkers” financed by Chevron instead.

This same pro-Bates coalition sent out a brochure, with a coiled and hissing snake on the cover; it warned Richmond voters to “Beware of this Arkansas Rattlesnake” (aka the Arkansas-born Butt). Pre-election website postings by BAPAC strongly implied that Butt, a local architect and Vietnam veteran, was a white racist who cares little about poor people and only looks out for himself and “his elitist, wealthy friends”

By October 30, Butt’s mainly small donors had raised about $60,000 for him. Even with an additional $25,000 in local public matching funds, his total campaign spending will be one-thirtieth of what Chevron spent on Bates & Co. Based on Richmond’s projected overall turn-out, Chevron’s failed investment in re-taking city hall works out to about $72 per voter. That’s a drop in the bucket for a global company with $21 billion in profits last year. And when it comes to “wealthy, elitist friends,” I bet that Chevron CEO John Watson, a Richmond native but current resident of San Ramon, has many more than Tom Butt–just based on Watson’s total compensation of $24 million last year.

By 11 pm on election night, neither Bates nor Corky Booze, Nat’s city council ally, were pleased with the way things were trending. They each faced humiliating defeat, by growing margins, in their respective races with Butt and Myrick. With half of Richmond’s precincts reporting, other council candidates backed by Big Oil or real estate interest groups were also losing to “Team Richmond.” As the mounting vote totals for RPA members McLaughlin, Beckles, and Martinez were announced, there were audible groans, gasps of dismay, or cries of “Oh my God!”

A man in a football jersey insisted that “it’s just half time–we’re going to come on back in the third quarter.” With his friend Nat slumped wearily in a chair a few feet away, looking deflated in the harsh florescent lighting of the storefront, Booze didn’t foresee any second half rally by Team Bates. Instead, Corky began spin-doctoring about the RPA’s unexpected success. “I truly believe that the amount of money Chevron spent made them beneficiaries of a sympathy vote, “ the Richmond junkyard owner told me. “Chevron did not play this game right. When you attack people, they get a sympathy vote.”

Coming from someone much criticized for his own disruptive bullying, city council filibustering, homophonic hectoring, and general hostility toward female colleagues, this revelation led to a series of other self-pitying reflections. “They made me the bad guy—this big black man attacking the little white lady,” Corky complained. “Gayle [McLaughlin] acts like the little old lady next door no matter how mean she is.”

Booze did credit the RPA with a strong ground campaign, if one over-reliant on volunteers he claimed were imported from Berkeley and Oakland. “The progressive group started campaigning a year and a half ago,” he noted. “The RPA was very serious…they played very dirty with me and Nat. They had 8 or 9 people at every polling place, handing out slate cards, with a special emphasis on people who couldn’t speak English.” According to Corky, the net result is that Richmond “has turned into Berkeley 100%.”

As the gloom deepened at Bates headquarters, Corky ratcheted up his martyrdom routine. “There’s no place for a guy like me because I’m too outspoken,” he lamented. “You won’t know what I’ve done for this city until I’m gone…I kind of feel like Malcolm X. No one will realize what I’ve done until I’m killed off.”

Not long afterwards, Bates himself gave a slightly more graceful concession speech. He nevertheless managed to imply that, because of low African-American voter turnout on Tuesday, his own community had let him down. In the meantime, Booze was expressing his personal sympathy for Bates, who will now be serving out the remainder of his four-year council term as a lone voice for Big Oil. “I feel sorry for Nat. This is his last go-round and he is going to be miserable. They’re going to destroy him and I don’t think he deserves that. Just remember, Tom Butt is a very vindictive guy.”

A Bash In The Baltic

At Butt’s post-election bash, there was little speechifying but the mood was much more celebratory. The news there was, of course, good, not bad. About 1:30 in the morning, available totals showed Butt winning with 51% of 11,000 ballots counted. Bates was running second with 35%. And, a third mayoral candidate, Uche Justin Uwahemu got nearly 13%–although he did not tip the election to Butt by “dividing the black vote”–as Bates campaign critics of Black Women Organized for Political Action claimed after BWOPA endorsed the lawyer, management consultant, and immigrant from Nigeria, rather than Nat.

As BWOPA president Kathleen Sullivan told me earlier in the day, at a polling place where she was stumping for Uwahemu, “I’m so tired of people trying to run the race card all the time. Folks in Richmond just want something different.” (For final totals in this and other Richmond races, see: www.cocovote.us)

Tom Butt’s victory party was held in the Point Richmond section of the city, which is the new mayor’s home turf.  There under the low ceilings of a century old tavern known as The Baltic, the usually laconic Butt was having the last laugh—and dance—with the help of a catchy tune concocted by several musical friends. Entitled “The Arkansas Rattlesnake,” this campaign song cleverly embraced BAPAC’s negative branding, added a driving snare drum beat, and vocals punctuated by exuberant “hee-haws.”

The Butt campaign’s hillbilly ditty lampoons Bates for having “so much oil on him, he can get through every doorway in town.” As friends, neighbors, and volunteers for Butt began to drift out after midnight, the song’s musical refrain was still booming throughout the dimly-lit bar:

“I am ‘The Arkansas Rattlesnake,’ living in your town.

I’m just trying to shop Chevron from burning the whole place down.

I am ‘The Arkansas Rattlesnake,’ doing the best I can, trying to help the folks in Richmond get over that Nate Bates man.

I am ‘The Arkansas Rattlesnake,’ crawling on the ground cause those folks from Chevron are trying to put me down.

I know the good folks of our city won’t let that deal go down.

You got ‘The Arkansas Rattlesnake,’ you got the best around!”

In an email message to supporters on Wednesday, Butt professed to be “genuinely surprised” at his victory, noting that he polled nearly 2,000 votes behind Bates when both ran for city council two years ago—and two RPA-backed candidates were defeated. He credited this year’s success to a collaborative effort with the RPA that turned out “voters turned off by Chevron, impressed with the remarkable progress Richmond has made in recent years, and tired of City Council meeting disruptions” aimed at discrediting that body’s now expanded progressive majority.

(Steve Early is a member of the Richmond Progressive Alliance and a supporter of Tom Butt for mayor of Richmond. He is the author of Save Our Unions: Dispatches From A Movement in Distress and other books. Early is currently working on a book about politics and public policy controversies in Richmond. He can be reached at Lsuport@aol.com)