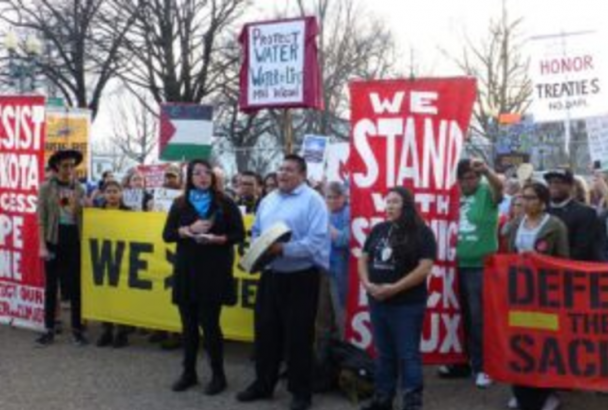 Anti-DAPL Activists Vow To Fight On After Army Corps Approval

Above Photo: Eryn Wise of the International Indigenous Youth Council, left, other protesters object to Army Corps of Engineers’ granting of DAPL easement./Photo by Mark Hand

Washington, DC–A large crowd gathered at the White House on Feb. 8 to let President Donald Trump know they intend to keep fighting the Dakota Access Pipeline (DAPL) on the same day the U.S. Army Corps of Engineers granted an easement to allow the project to be finished.

The easement was the final permit that pipeline developer Energy Transfer Partners needed for the 1,172-mile pipeline to be completed. The section approved by the Army Corps will run under North Dakota’s Lake Oahe, just upstream of the Standing Rock Sioux Tribe reservation.

The Army Corps granted the easement even though the agency had announced plans in December to prepare an environmental impact statement (EIS) on the pipeline’s proposed crossing of Lake Oahe. That was a short-lived victory for the pipeline’s opponents. Soon after assuming the presidency, Trump issued a presidential memorandum directing the Army Corps to expedite approval of the project.

The Standing Rock Sioux Tribe is expected to file a lawsuit and ask for a temporary restraining order to halt construction while the legality of the Army Corps decision is reviewed in court. The tribe will challenge any easement decision on the grounds that the EIS was wrongfully terminated and “will demand a fair, accurate and lawful environmental impact statement to identify true risks to its treaty rights, including its water supply and sacred places,” lawyers for Earthjustice, which is representing the tribe, said in a Feb. 7 statement.

With momentum now on DAPL’s side, activists are beginning to look at ways to connect Standing Rock with other issues across the U.S. “Whatever momentum we have, we cannot let it end at Standing Rock,” Wise told the crowd. “We have to continue building intersectional resistance against Donald Trump and against all fascism that exists. … I want everyone to continue disrupting business as usual.”

The D.C. rally was one of dozens of “last stand” rallies held across the country. If DAPL is successful in constructing and operating the pipeline, the Standing Rock tribe said it will seek to shut the pipeline operations down.
Trump reportedly sold his entire stake in DAPL-developer Energy Transfer Partners in 2016. Energy Transfer Partners CEO Kelcy Warren also gave $100,000 to Trump’s joint fundraising effort with the Republican Party, according to Federal Election Commission records.

On Tuesday, Trump addressed his decision to expedite approval of DAPL, telling reporters: “I haven’t even heard one call from anybody saying, ‘Oh, that was a terrible thing you did.’”

“Donald Trump will not build his Dakota Access Pipeline without a fight,” Tom Goldtooth, executive director of the Indigenous Environmental Network, said in a statement. “The granting of an easement, without any environmental review or tribal consultation, is not the end of this fight — it is the new beginning. Expect mass resistance far beyond what Trump has seen so far.”

Video: Natives from Standing Rock Sioux and other tribes march in Washington, DC on Nov. 17, 2016.