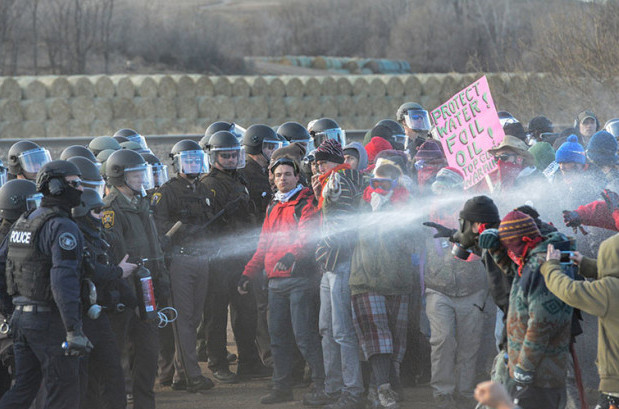 Anti-DAPL Protesters Hold ‘Day Of Action’ Across US

Protests against the Dakota Access Pipeline are happening across the country as the construction company has sought relief in court. With more than 200 demonstrations planned, the Day of Action is expected to be the largest anti-DAPL protest in months.
TrendsDakota Access Pipeline

Shortly after 6:00pm EST in New York City, protesters were arrested. Video of the final police warnings was shared on Twitter by Candace Bryan, who reported 36 arrests.

Arrests are being made #NoDAPL pic.twitter.com/yA1KAdasy8

Lots of protests this morning. pic.twitter.com/oiRKNEG05b

“The purpose is to elevate the issue and to encourage the Army Corps to exert its power to stop this pipeline,” said Indigenous Environmental Network (IEN) spokesperson Dallas Goldtooth, according to Reuters.

RT’s Alexander Rubinstein was at the scene of a protest in Washington, DC, outside the Army Corps of Engineers headquarters. Later Tuesday evening, Senator Bernie Sanders (I-Vermont) joined the protesters in DC. Meanwhile, RT America’s Trinity Chavez reported live from the protests in New York City. In San Francisco, California, thousands of protesters blocked off parts of Market Street before settling in outside the Army Corps offices, where they linked arms. The demonstration also blocked employees of Uber, Square and other companies from entering the shared building.

Protests are continuing at the camp in Cannon Ball, North Dakota, near the construction site. Riot police have advanced on the water protectors, many of whom are members of the Standing Rock Sioux tribe, whose reservation is extremely close to the planned pipeline. Law enforcement used mace and arrested several protesters, Reuters reported. The ‘Day of Action’ comes just one day after the Army Corps of Engineers and Department of Interior delayed a decision on whether to allow a tunnel to be built under the Missouri River reservoir, Lake Oahe – the source of water that is the focus of the protests. The Army Corps of Engineers said it wants input from the Standing Rock Sioux before making a decision. The night before the nationwide protests, the companies behind the project ‒ Energy Transfer Partners and its subsidiary, Sunoco Logistics Partners ‒ asked a US District Court in Washington, DC for declaratory relief to “end the [Obama] Administration’s political interference in the Dakota Access Pipeline review process.” Delays in the $3.7 billion Dakota Access project have already cost more than $100 million, the companies said in their court filing. The pipeline is currently about 85 percent complete, Phillips 66, one of the pipeline’s investors, said last week. The only remaining work to be done in North Dakota is the section that would run under Lake Oahe, according to Energy Transfer Partners.

Here are some of the other protests from around the country:

Two Standing With Standing Rock activists lock themselves to the entrance to Wells Fargo in #Boulder pic.twitter.com/I7idH44Yha

“Shut it down” #NoDAPL action in Chicago pic.twitter.com/WyKKs5rYge

#NoDAPL protest underway in front of Bank of America. pic.twitter.com/bpd9CHjJP4

Protesters chant “water is life,” will be walking to Capitol building @BadgerHerald pic.twitter.com/xDymgOr4ub

Protestors stood in solidarity for Standing Rock in front of the Allen Street Gates this afternoon. #NODAPL pic.twitter.com/gQZXdKlsaj