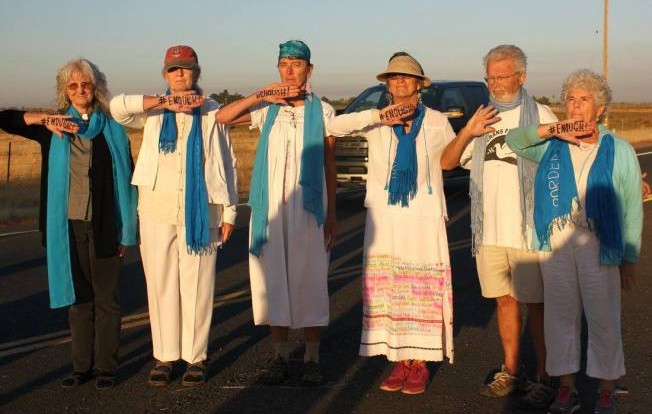 Above photo: Sharon, Chris, Toby, Shirley, Barry, and Cathy.  All but Barry crossed onto the base.

California – On Tuesday, Sept. 27, the very day that activists were at Beale Air Force Base protesting endless wars and illegal drone killing,a U.S. Drone attack killed 13 civilians and wounded 14 others in Aghanistan.  Initially the Pentagon claimed that most of those killed were “suspected militants,”but a day later they are admitting to most or all being civilians.  (story here)  Who will be next?

Consider joining us at Beale as often as you can, or at a drone base nearest you.

Consider joining us at Creech AFB this fall or spring, where U.S. Airmen are ordered to execute human beings from the desert of Nevada with armed Predator and Reaper drones:

This morning I was arrested with four other women at Beale Air Force Base after crossing onto base property.   We were taken by military bus to a building on base, given citations, and released.  We may be given an arraignment date and we may go to trial, although in recent months all charges for peace activists have been dismissed.

We were wearing blue scarves and we had #enough written on our hands because we took this action in solidarity the Afghan Peace Volunteers and their blog Our Journey to Smile.  Afghan Peace Volunteers is a group of young people working for peace in Afghanistan.   I became aware of them when peace activist Kathy Kelly came with us to Beale a couple of years ago.  Our blue scarves and the #enough banners and words written on our hands are a response to their invitation “Join us to say #enough.”

Before we were arrested, each of us explained what we have had enough of.  I explained that I have had enough of drone warfare.  (Beale is the home of the Global Hawk Drone, a surveillance drone that identifies targets for armed Predator and Reaper drones.)  I have also had enough of the U.S. Air Force Vision for 2020, which is geared toward “full spectrum dominance” for the purpose of “protecting U.S. interests and investments” as “the globalization of the world economy… continues, with a widening between “haves” and “have-nots.”  I have had enough of the U.S. military enforcing a global order that is enriching the already wealthy, protecting the privileged, exploiting those who are vulnerable, causing massive suffering, and destroying this beautiful earth.  #Enough war. #Enough “accidental” (or incidental) killing of children.  #Enough suffering.  #Enough extrajudicial killing.  #Enough.