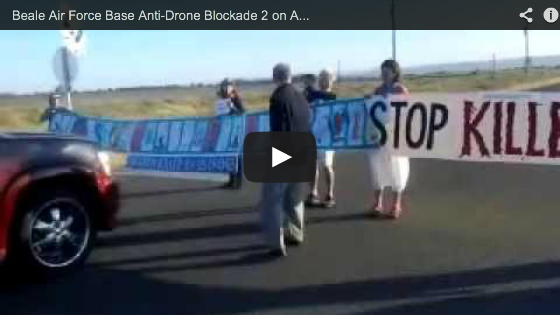 MARYSVILLE/BEALE AFB – Five people were arrested around 8 a.m. this morning after dozens of anti-drone demonstrators blocked the entrance to Beale Air Force Base for hours, resulting in hundreds of vehicles being prevented from entering the base.

The CHP had to be called in to clear traffic which had lines of hundreds of cars in several directions after peace advocates from Sacramento, San Francisco, Nevada City and as far away as Fresno protested President Obama’s U.S. killer drone program.

Those arrested were briefly held on misdemeanor charges, which could result in six months in jail if convicted in federal court. In a similar action, 31 people were arrested at Hancock Air Base in Syracuse, NY Monday.

Last October, nine people were arrested at Beale during protests – and five are facing months in prison if convicted in a trial set for Sacramento Federal Court this summer (August 12).

Beale AFB is home to the U2 and the Global Hawk, the unmanned surveillance drone that is an “accomplice” in drone killings. Activists arrested attempted to deliver a letter to the Beale AFB commander that demanded:

(1) An immediate ban on the use of all drones for extrajudicial killing (2) A halt all drone surveillance that assaults basic freedoms and inalienable rights and terrorizes domestic life in Pakistan, Afghanistan, Iraq, Yemen and Somalia (3) A prohibition on the sale, and distribution of drones and drone technology to foreign countries in order to prevent the proliferation of this menacing threat to world peace, freedom and security and (4) The U.S. must immediately stop this lawless behavior of drone warfare that violates many international laws and treaties.

“US military and CIA Drone attacks have killed thousands of innocent civilians, including women and children, in the Middle East, Somalia, Pakistan, and Afghanistan. In the name of combating terrorism against the U.S. we are terrorizing innocent people, and creating many more enemies and potential terrorists in the process,” said a statement issued by Veterans for Peace, Code Pink, Chico Peace and Justice Center, Nevada County Peace Center, Peace Fresno, WILPF and World Can’t Wait.