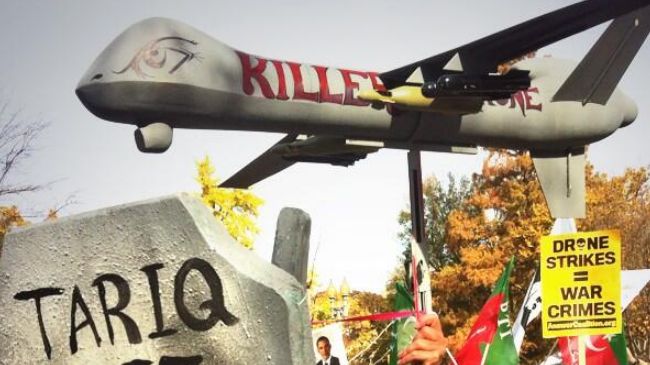 Anti-Drone Summit Kicks Off In DC With Protest

Activists from across the globe kicked off the largest-ever anti-drone summit Friday with a boisterous White House rally then march to the headquarters of one of the most notorious weapons manufacturers in the world.

“After ten years of using drones it is about time that American citizens demand accountability from our government,” said organizer Medea Benjamin of Code Pink in an interview with Common Dreams. “Our government has been getting away with a covert program killing innocent people in our names. It is high time we react and say no to killings, no to secrecy, and no to a kill list.”

This historic gathering comes amid a growing chorus of criticism of the drone wars, now led by President Obama, following the first-ever testimony of Pakistani drone strike survivors before US Congress, as well as growing concern from Amnesty International, Human Rights Watch, and the United Nations over drones.

Attendees include representatives from some of the most drone-ravaged parts of the world, including Yemen, Pakistan, and Afghanistan.

After a somber ceremony at the White House to commemorate those who have died in drone strikes, scores of protesters “took over the streets” according to Benjamin and marched to the Washington, DC headquarters of General Atomics where they held a die-in.

“We re-enacted what it is like when drones terrorize a community,” said Benjamin. “We handed General Atomics a letter saying we have seen first-hand the destruction they have caused in Yemen and Pakistan. We encouraged them to stop making things that hurt people. We told them that if they feel remorse, they are welcome to give compensation to victims.”

The drone summit, which will continue over the weekend, was organized by CODEPINK, the Institute for Policy Studies, The Nation Magazine, Center for Constitutional Rights, and National Lawyers Guild (Georgetown Chapter). A group statement explains, “In addition to [a] Yemeni delegation, the Summit will include drone pilots, legal experts, human rights advocates, authors, technology experts, artists and grassroots activists.”

The gathering is expected to draw over 400 people and include a lobbying day Monday. One of the pieces of legislation that attendees will advocate for is the drone strike transparency bill, which recently passed the Senate Intelligence Committee. Advocates say this bill-which would require the Obama administration to report on civilians killed by drone strikes-is paradigm-shifting in a war where the US kills with impunity behind a veil of secrecy.

“This bill is absolutely crucial,” said Robert Naiman of Just Foreign Policy in an interview with Common Dreams. “Until now, the administration has gotten away with saying civilian casualties have been rare, but independent reporting has said the opposite.”

“We’re gathering at a time where there is an undeniable momentum against drones,” said Benjamin. Common Dreams