Washington DC: Over a thousand are expected to mobilize in a counter-demonstration against a White Nationalist rally outside the White House on Sunday. A White Nationalist rally organized by Jason Kessler is permitted to protest in Lafayette Park in the afternoon. National Park Service police also granted Answer Coalition and a broad base of social justice groups a permit to counter-protest in Lafayette Park at the North side of the park.

Police are preparing for the possibility there will be confrontations by erecting barricades to keep groups apart by 100 feet. They are also activating more police for the late afternoon protests which are expected to last until after dark.

Since Trump took office, Nationalists have been emboldened. Their rallies in Portland, Charlottesville, Boston, and Vancouver have spurred counter-protests, incited violence, and strained municipal resources.

A Nationalist Rally organized by Jason Kessler in Charlottesville last August turned deadly when James Fields Jr., 21, of Maumee, Ohio, drove into a group of counter-protesters, killing civil rights activist Heather Heyer and injuring 19 others. Nationalists were also recorded beating counter-protesters with sticks, including a black youth who was hospitalized. Nationalists were rallying in Charlottesville against plans to remove a statue of Confederate General, Robert E. Lee.

Police began barricading Lafayette Park Friday night and planned to move the Peace Vigil to the edge of the park, according to longtime vigil manager, Philipos Melaku-Bellos. Streets surrounding the area will also be closed.

Kessler’s group had planned to use the Vienna metro station to rendezvous and arranged for reserved train transport to Foggy Bottom, then march to the White House. But members of the DC chapter of local Amalgamated Transit Union (ATU) objected to metro management giving Supremacists special consideration and the plan was scrapped. Kessler was forced to scramble and arrange private transportation for his group. 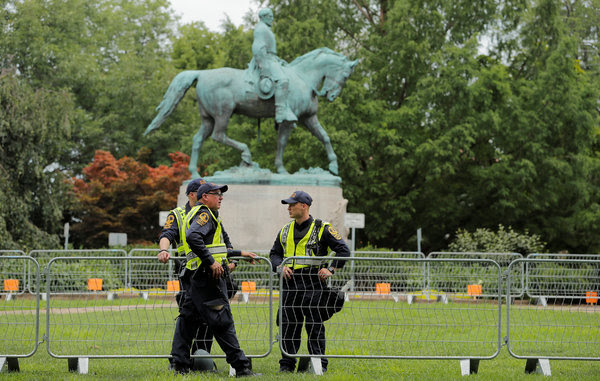 Police barricade in Lafayette Park. By Lucas Jackson for Reuters

Speaking for the counter-protest groups, Eugene Puryear, an organizer with the group, Stop Police Terror Project DC, said, “The forces of fascism and organized white supremacy feel emboldened because they believe they have a friend in the White House. Donald Trump said there were “very fine people” among the Nazis and the Klan.”

Puryear also said that the vast majority of Americans reject the nationalist’s message of hate and oppression. Eugene Puryear said in a press release that Answer Coalition’s counter-rally would be peaceful but resolved to stand against bigotry and hate.

Answer Coalition will not be the only group protesting the Nationalists. Western Presbyterian Church, a local DC congregation 2400 Virginia Avenue NW, is hosting a short walk to the Foggy Bottom Metro, where it will offer prayers aloud. Organizers will mark the sidewalks with chalk where Kessler’s group will arrive.

Charlottesville was also the scene of a Nationalist torch rally last August when Richard Spencer led hundreds of Nationalists in a vivid torch march in Charlottesville onto the Grounds of the University of Virginia Campus, recreating images of KKK rallies from decades before.

On August 12, the day after the torch rally, Kessler’s rally at Lee Park drew 500 Nationalists and Supremacists, including Richard Spencer and KKK leader David Duke.

The rally was met by hundreds of counter-protesters which soon erupted into running street battles with dozens injured after Charlottesville police unexpectedly pulled back from Lee Park. Nationalists and Supremacists left the park to confront counter-protesters. After nearly an hour of street battles, Virginia State Governor Ralph Northam declared an emergency and State police moved in, canceled the permit and closed Lee Park. The Virginia State National Guard was called in and patrolled the streets around the park.

The Mother of Heather Heyer plans to march on Sunday with counter-protesters.