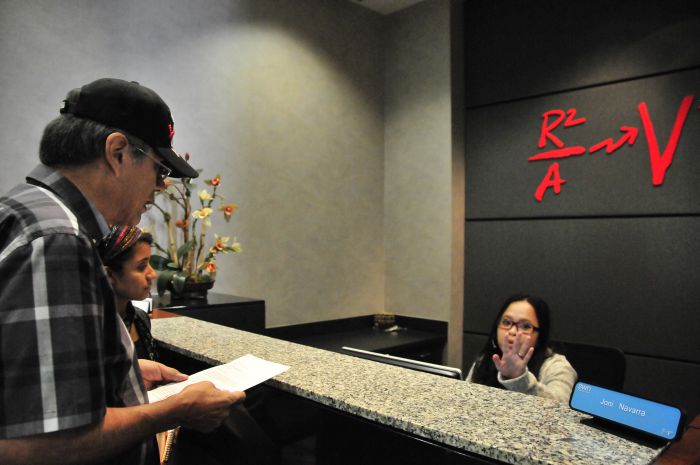 The request is that “all projects, leases, and permits issued to SWN Resources by the Government [of New Brunswick] come to a halt until all Mi’kmaq-L’nu, and Wabanaki communities, as sovereign individuals are Meaningfully Consulted, and that we are able to come to an informed decision as individuals.”

Bryan Parras, media contact for TEJAS, was among those who delivered the request today in Houston.

“I then asked the receptionist, Joni Navarra, if she would sign for it. She wouldn’t sign. So I told her ‘I’m going to leave it here on the counter and take your word for it that it won’t wind up in the trash. Laurie let me know that I could just fax it in. So now we’re encouraging all people to just fax in this request.”

The letter from the Mikmaq Warriors Society follows, and is available as an attached pdf.

Although SWN Resources project for the Province of New Brunswick is in its pre-operational stages; the Federal and Provincial Government has failed the Crown’s fiduciary duty to consult the grassroots people about your company’s interests in oil/gas testing/exploration, and development in Atlantic Canada prior to issuing SWN Resources any leases or permits.

The L’nu/Mi’kmaq people do not only live, fish, hunt and thrive off our waters and land in Mi’kma’ki. Our main concern is the protection of our waters, and these purposed projects your company wants to do are too close to our water. Oil/gas exploration, testing and development is referred to as the source of the poisoning of the world’s water. We see this type of development as a threat to not only our spirituality, customs, way of life, but we also see them as another form of cultural genocide by the Government and SWN Resources.

The majority of our L’nu-Mi’kmaq people rely on the natural resources that our mother earth has provided for us, resources such as: medicines, plants, berries, fish, eels, animals, and birds to survive. 85% of our L’nu/Mi’kmaq population live in poverty and the only way to survive is off our natural resources is from our land and water; therefore any destruction done to our lands and waters is a threat to not only our way of life, but also as a threat to our overall survival.

It is our request that all projects, leases, and permits issued to SWN Resources by the Government comes to a halt until all Mi’kmaq-L’nu, and Wabanaki communities, as sovereign individuals are Meaningfully Consulted, and that we are able to come to an informed decision as collective individuals. The honor of the crown is at stake with the duty to meaningfully consult (Haida Nation and Taku River Cases/Delguukmew Decision) with all Mi’kmaq-L’nu and Wabanaki communities in the Atlantic Region with projects such oil/gas exploration/development and testing by SWN Resources; Destruction of Aquafiers; Hydraulic-Fracturing & Exploration/Drilling for Shale Gas/Oil Deposits in any inch of our sovereign Territory of Mi’kma’ki.

These projects are a sad reflection of the modern disdain for the environment, and will drastically reduce both the health of the local ecosystem and the quality of life in Atlantic Canada and surrounding areas. Destruction of our water is another form of genocide not only to our people but to the fragile environment and endangered species that call it their home. These attacks to our people’s water source infringe on the integrity of our cultural resources and heritage in our own region. Allowing further development violates our Treaty Rights to not only hunt, fish, and gather from; but our Treaty Right, Aboriginal Right, and Title Right to the land and water itself. Our Aboriginal rights are unique because they are protected by the Canadian Constitution Section 35(1982), affirmed by the Donald Marshall Case and the United Nations Declaration of Indigenous Rights (2007, signed by Canada 2010). It is our demand that all activities come to a complete halt, and all permits and licenses be revoked. As we assert our rights as Sovereign Mi’kmaq-L’nu Nation, and assert our rights to unite in solidarity with other Nations, we vow that we will do whatever it takes to protect our water, the blood of the earth in our traditional territory.

We expect a response within 48 hours regarding your position in this matter.