It was a hot day in Houston, Texas, on April 26, but that didn’t stop nearly 200 people — representing mainly the oil and gas industry — from filling the luxury hotel known as The Houstonian. While the menu included extravagant meals, such as steak wrapped in bacon with bourbon sauce, the real draw was Argentinian President Mauricio Macri, who had a simple message: “Come invest in Argentina.”

Macri, who met with President Trump in Washington, D.C. the following day, is positioning his country as the next potential market for natural gas. Argentina boasts one of the world’s largest shale gas reservations called Vaca Muerta, or Dead Cow. While hydraulic fracturing, or fracking, began in the region in 2013, Macri’s government intends to bring in more investments and expand production.

Not everyone in Argentina, however, agrees with the government’s plans. Just a day before the event, the province of Entre Rios, located about 900 miles northeast from Vaca Muerta, became the first province in the country to ban fracking. While the province is not known for any oil exploration, it was hailed as a symbolic victory.

“The act was the result of a growth of information [on fracking] that we shared among different sectors of society,” explained Luis Lafferriere, an organizer who helped pressure lawmakers in Entre Rios to ban fracking. Since 2012, more than 25 organizations — from unions to student-led groups — entered into a coalition called the Movement to Free Entre Rios of Fracking, which held meetings, organized assemblies, coordinated mobilizations and sent lawmakers thousands of signatures against fracking.

The coalition had become familiar with fracking stories from the United States — like the infamous flammable tap water scene in the 2010 documentary “Gasland” and the numerous reports of earthquakes near fracking sites. As a result, they invited speakers from some of those communities to talk about their experiences. After years of pressuring officials, the decision finally came in late April that Entre Rios would not allow fracking on its lands.

“On our path to the provincial law achievement, we won important, partial victories,” Lafferriere said, citing “numerous ordinances in nearly 40 localities of the province” that banned fracking in their respective jurisdictions.

The decision by Entre Rios is surprising, considering Argentina depends on fossil fuels for around 90 percent of its energy. What’s more, natural gas accounts for 50 percent of that fossil fuel mix, and much of it is imported at a higher cost — the result of both a surge in energy use among Argentines and a drop in natural gas production, stemming from the 2001-02 economic crisis.

According to Fernando Cabrera, a researcher at the Buenos Aires-based Observatorio Petrolero Sur, or Southern Oil Observatory, the high cost of importing natural gas did, for a time, stimulate interest in non-conventional resources like renewable energy. However, these resources fell short of expectations, and the country turned its attention toward extracting more fossil fuels — with Argentina’s state-owned company, YPF, leading the way. Indeed, YPF now manages 40 percent of oil production. 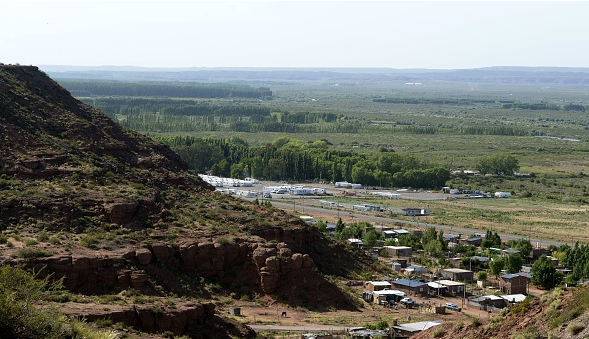 Notably, it is the provinces that are “the owners of fossil fuels in Argentina,” Cabrera said. He detailed how the provinces, like Neuquen, own 12 percent of the oil wells, which means state government officials have an actual stake in permitting fracking.

The national government’s desire to rid itself of foreign dependence on fossil fuels reflects decades of trying to escape economic stagnation. Former President Carlos Menem told the country in 1992, amid the beginning of neoliberal reforms, that it would finally “leave this true hell called the Third World.” The country, however, fell even further into the abyss, until Nestor Kirchner, who was elected president in 2003, defaulted on International Monetary Fund-imposed loans and boosted exports.

Still, the push by the government to expand fracking is causing “hell” for others. In Neuquen — a state just west of the capital of Buenos Aires and in the heart of Vaca Muerta — residents complain of loud machinery that shakes the Earth, which has them fearing eruptions or earthquakes.

According to Milton Lopez, an activist with the group Vista Alegre Free of Fracking and In Defense of Life, the government profits from fracking, while causing environmental damage and sickness. Lopez said his group spent a year pressuring representatives to pass an ordinance. Finally, in January, Vista Alegre became the first municipality in Argentina to prohibit fracking. Almost immediately, however, the victory was challenged in court, following an appeal by Neuquen’s state attorney, who argued that local officials do not have the jurisdiction to make such a decision. Argentina’s Supreme Court suspended the ordinance in May and will announce a decision — albeit without any clear timeline — on whether it is unconstitutional.

While the Supreme Court dismissed their testimony, it didn’t stop residents from expressing their displeasure. They’ve demonstrated in front of the tribunal court handling the case, marched to the capital and blocked a highway. According to Lopez, they won’t be stopped by a “right-wing government” that’s stripping their human rights, as well as their rights to water and land.

“We’re defending our ordinance,” he said. “We’re using all means of communications [to warn people about fracking] … and we’re working with others to prohibit fracking [elsewhere].” 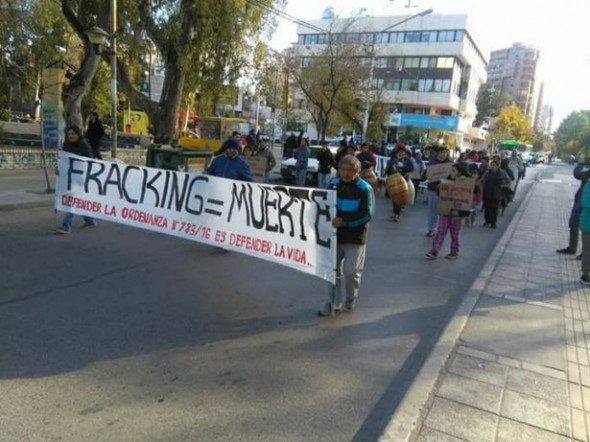 Vista Alegre residents march in defense of their anti-fracking ordinance in Neuquen, Argentina on May 23, 2017. (Facebook / Vista Alegre Free of Fracking in Defense of Life)

Meanwhile, indigenous people are also getting involved. The Mapuche — which are the largest indigenous group in Argentina, with a population near 200,000 and a history dating back to 600 B.C. — are facing a severe threat to their land, especially in the Vaca Muerta basin.

“The concessions made to the companies are illegal,” said Lefxaru Nawel, a Mapuche resident in Neuquen. “They are not following the law or customs. We need to be consulted, but we’re not.”

When fracking started in Neuquen, after the 2013 agreement between Chevron and YPF, it was on lands already tainted with heavy metals such as arsenic and lead from a previous oil well used since the 1970s. Despite occupying oil wells for multiple days in 2013, residents have not seen a response to their protests and worry that there is no plan from provincial or federal officials to address further waste and pollution from more fracking. Furthermore, Vaca Muerta comprises two-thirds of Neuquen and impacts about 30 Mapuche communities.

“We [Mapuche] each have a different situation, but we’re all affected the same,” said Nawel, who lives more than half a mile from a well.

The Mapuche have, for decades, faced public and private officials who seize and taint their land without consulting them — like in the neighboring province of Rio Negro, where authorities take land for mining companies. The fracking companies act no different, Nawel explained, adding that “conflicts are growing” between local residents and state and federal authorities. As a result, repression is also on the rise. In one recent case, authorities used rubber bullets and seriously injured protesters.

At a press conference on May 29 in front of YPF’s headquarters in Neuquen, 10 Mapuche communities handed a letter to government officials requesting that their rights be respected, as fracking operations expand due to private investments. YPF insists it does engage in dialogue with local communities and accused “some leaders” of “pursuing interests” against the community and environment.

While, according Nawel, the Mapuche are merely defending their territory, YPF considers the Mapuche harmful to operations and, in a statement to the press, views their claims as nothing but demands for “meaningless compensation.” 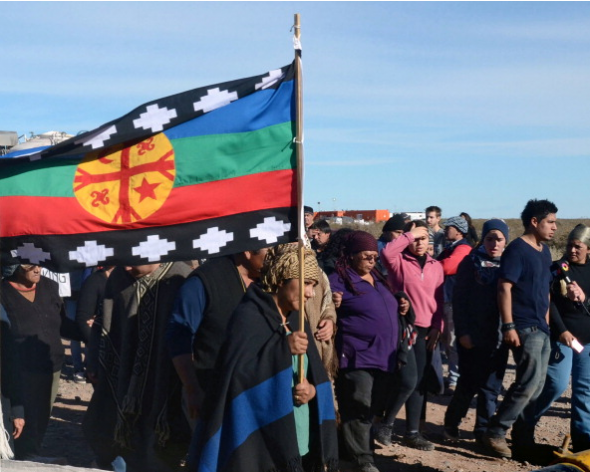 Fossil fuel companies are eager to profit off of any boom, considering the natural gas bonanza that’s taken place in the United States over the last decade. Last year, Rex Tillerson, then the head of ExxonMobil, said the company might invest $10 billion in the Vaca Muerta shale gas reservation. Other companies, such as Chevron or Shell, are also planning to extract gas from the abundant basin field.

At the same time, however, future actions against fracking are anticipated. Lopez said residents will not feel defeated if their ordinance is found unconstitutional, as they can appeal to the Inter-American Court of Human Rights. Nawel, meanwhile, stressed that the Mapuche will meet among themselves to prepare for future actions.

In the case of Entre Rios, the national government did not issue a wide public response to the law. Lafferriere suspects this is because it fears other provinces might try to follow their lead. He acknowledged other areas throughout Argentina already have more interest from oil and gas companies. Yet, at the same time, he considers the law a victory for the broader movement against fracking, especially after hearing “anti-fracking fighters” across the nation have been emboldened by the law, adding, “It would be criminal to jeopardize people for the benefit of the few.”