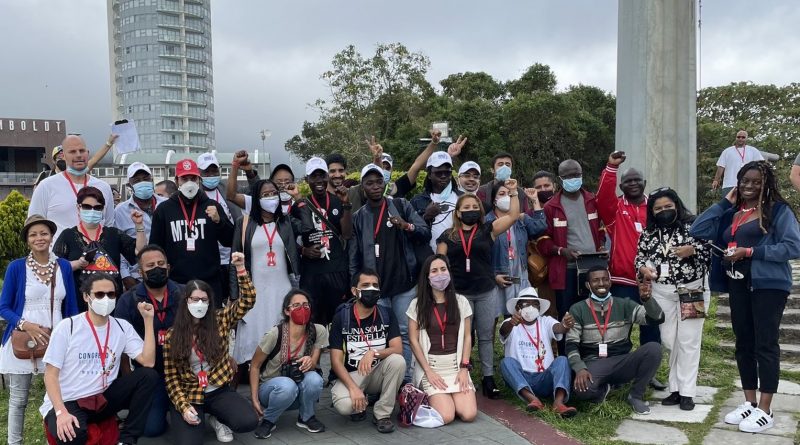 Above Photo: Opening day of the Bicentennial Congress of Peoples of the World in Caracas, Venezuela. June 21, 2021. Photo: Twitter @dannyshawcuny.

Venezuela has launched a bold call for unity among the left at the International Bicentennial Congress of the Peoples of the World, taking place this week in Caracas, June 21st to 24th.

Conceived by worker-president Nicolás Maduro Moros, the Congress is a socialist and a worldwide initiative. It proposes the Anti-Imperialist Platform of the Working Class. The Bicentennial celebrates the victory of Simon Bolivar’s armies over the royal troops of Madrid in the territory that became Venezuela.

Over 120 countries are represented at the Congress by some 350 delegates from across the world, and equal numbers of Venezuelan delegates, among them many organizers in the Afro Venezuelan movement and from Indigenous communities.

The crafting of long-term strategies for solidarity has been entrusted to over 3,600 communes organized within the Popular Councils of People’s Power.

In November of 2020, President Nicolás Maduro was approached by citizens who put forth a proposal “to create 200 communal cities” as part of the Bicentennial celebrations for the battle of Carabobo that drove the Spaniards out of today’s Venezuela. By the end of February, dozens of social movements had offered particular ideas about “deepening the Bolivarian Revolution.”

Caracas, Venezuela: Colombian social movements are participating in the Bicentennial Congress of the Peoples of the World which begins today.

Venezuela faces US-led sanctions against the country and a draconian blockade, whose effects have been devastating. The damages measure in the billions of dollars. With “criminal” intent, in the words of President Maduro, unilateral sanctions contravene international law and have unleashed health crises of “genocidal proportions.”

One of the aims of people at the grassroots is “to push forward and strengthen their leadership” in the nation’s affairs, so they stand at the forefront of political organizing, and also economic solutions to the current crisis. Their instrument is the Communes, “that are the backbone of our Revolution: the vehicle through which power will shift into the hands of the masses.”

At the Bicentennial Congress, some 6.5 million people from Venezuela’s social movements are participating virtually through the “Sistema Patria,” that now unifies revolutionary bases across the country. Some of the largest sectors to respond to the defense of the revolution have been women and seniors.

National Assembly lawmaker Julio García Zerpa from the border state of Táchira, that has struggled for years against paramilitary operations launched from Colombia and backed by the United State, argues that “Venezuela has hit bottom and is now on the ascent.” Venezuelan progressives believe that only international solidarity will protect working people in their country or anywhere else.

“Piracy is the logic of neoliberalism,” said Bolivian statesman Sacha Llorenti, Executive Secretary of the Bolivarian Alliance for Latin America and the Caribbean, ALBA-TCP. “Three members of ALBA—Cuba, Venezuela and Nicaragua—are under blockades that are completely illegal. While international banks are rescued with trillions of dollars and the countries of the north stockpile three times as many vaccines as they need, at the same time, before the outbreak of COVID and all through the pandemic, ten thousand people died every day from curable diseases. What kind of system is this?” Llorenti asked.

Tibisay Lucena, who for years headed Venezuela’s National Electoral Council (CNE), which is recognized worldwide for its integrity, spoke on the theme of democracy under fire in Latin America. Lucena characterized conservative governments like those in the Lima Group as “little lap dogs that wake up every so often to bite their peoples. The United States is only interested in democracy to the degree that it is a faithful reflection of the elites.”

“Peoples who are sovereign, who act with dignity, are the hope of all humanity,” said Lucena.

Adán Chávez lays out the task

Adán Chávez was the principal speaker at the opening plenary of the People’s Congress and urged a “global strategy for unity.”

“This Congress has suffered all kinds of attempts to sabotage it, up to the present moment. Such efforts by the right-wing are never absent on these occasions.”

“Imperialism has achieved accidental and temporary victories,” said the Teacher Adán, as he is called with affection. “The countries of the north will continue their aggression but they are not going to prevail. Of course, this struggle will be hard.”

“Clearly one of Venezuela’s great strengths has been the alliance between civilians and the military, a model that Chávez launched. We can say the same is true of the Sandinistas.”

“The battle of Carabobo that drove the Spaniards out of Venezuela opened the way to the campaigns of liberation in the rest of South America. For us, Carabobo is still unfolding today through the idea of Latin American integration.”

“Decades ago, Comandante Chávez talked about the necessity of commemorating the anniversary of Carabobo.” Adán Chávez remembers the words of his brother: “Even if some of us are no longer alive, it doesn’t matter because our children will celebrate. If one of us here today is not alive on that day, we’ll be carrying that person right here on our shoulders, and likewise in our hearts.”