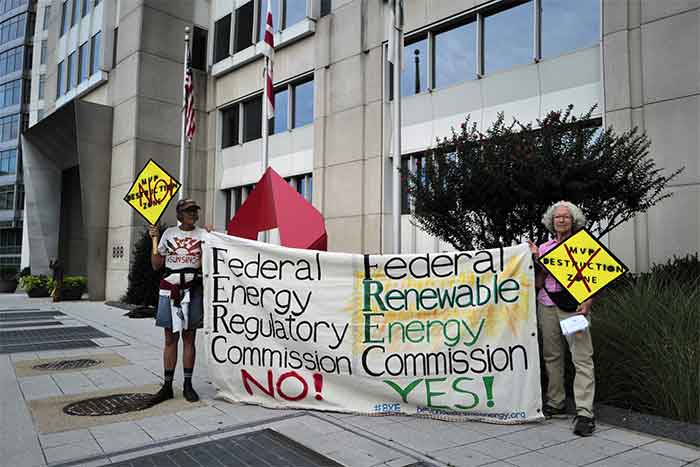 A small group of dedicated activists today rallied in front of the Federal Energy Regulatory Commission (FERC) headquarters calling for the commission not to issue a second extension certificate to the controversial Mountain Valley Pipeline (MVP) a $5.5 billion 303-mile-long interstate natural gas project. The 42-inch diameter pipeline is facing opposition from numerable groups with issues related to global warming, the route’s effect on endangered species, construction issues including continual erosion problems along its length along with complaints from landowners whose property the massive pipeline project is crossing.

The commission is meeting today to consider granting the second extension request to MVP for completion of the final 20-mile segment of the project. As workers at the commission arrived this morning, they were handed leaflets by activists regarding what they call the MVP Destruction Zone calling for the commission to not grant the request for the extension to complete the project.

The project originally scheduled to be completed in 2018, would convey natural gas from near the southern end of the Marcellus Shale Play that encompasses five states and is estimated to cover 72,000 square miles of the Appalachian basin. The pipeline’s route begins in northwestern West Virginia near Bradshaw and runs through Virginia terminating in southern Virginia with a possible extension into Alamance County, North Carolina, although the North Carolina extension has met a great deal of resistance as to its inclusion in the project.

The controversial project has been delayed numerous times due to issues including lawsuits in which the courts have revoked permits issued by several federal agencies, including the U.S. Fish and Wildlife Service, the U.S. Forest Service and the Bureau of Land Management. All the revocations and lawsuits brought by activists and landowners among others have delayed completion of the project as well as substantially increasing the associated costs of construction.

The environmental impact of the completed project as related to global warming estimates that the greenhouse gasses in Virginia would produce an annual output of 89 million metric tons of carbon dioxide equivalent. It is estimated that volume would be around one percent of annual U.S. output making it a major contributor to global warming in an era of a climate emergency

Beyond such environmental concerns is that of landowners who have been particularly impacted in many ways for the last eight years of construction including the use of eminent domain by the gas company in securing private property for the pipeline’s route. Gas companies have the right to use eminent domain powers through the federal statute known as the Natural Gas Act (NGA) of 1938. Many landowners have complained and objected to such use by a for-profit company that takes over their property for private use. However, gas companies before invoking that power must first obtain a FERC certificate that construction is consistent with the “public convenience and necessity” before eminent domain can be secured. Another issue of contention for landowners is the 125-foot temporary construction easement and the permanent 50-foot easement granted for the project along with erosion and environmental degradation as mentioned earlier.

As with all major pipeline projects it takes a consortium of corporations to finance and operate such an immense undertaking and this project is no exception. The project is owned and being constructed by MVP in a joint venture with a group that reads like a Who’s Who of major energy companies. Included are Consolidated Edison Transmissions Inc. (owned by ConEd), EQM who bill themselves as “one of the largest gas gatherers in the U.S.,” Nextera Capitol Holdings Inc, WGL Midstream and RGC Midstream LLC.

Protesting against pipeline construction is unfortunately an annual event here in Washington. Last October the city faced a week of unrest when over fifty environmental activist groups descended on the city with daily demonstrations by indigenous people and their supporters in a show of support for and to demand that the Biden administration declare a climate emergency and stop all new fossil fuel projects.

Indigenous activists under the rubric of “People vs. Fossil Fuels” demanded a stop to the Line 3 project across the upper Midwest that was and is still a cause of great concern with its attendant environmental impact along with water rights on native lands. At the time the groups presented a petition with over 400,000 signatures from people across the nation to the Army Corps of Engineers calling on them not to approve the “Black Snake” project.

Referring to “Water is Life” and their concerns for the eventual environmental pollution and despoiling of the water resources as related to the project on native lands, the Army Corps of Engineers ultimately granted permission to proceed with the Line 3 project ignoring the concerns of activists.

It is therefore highly doubtful that a multibillion-dollar project like MVP will not receive its extension request to complete the pipeline project. But climate crisis activists vowed that they would continue on in their quest to make the road to completion a challenge for the company to achieve.