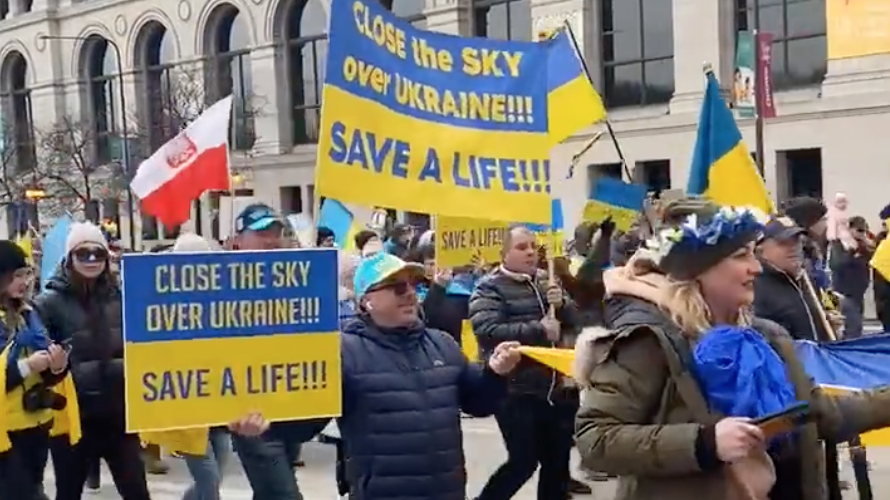 Anti-Russian Hysteria In The US: Who Does It Serve?

Above Photo: Thousands of people in Chicago calling for a no-fly zone over Ukraine. Jenna Barnes / Twitter.

The United States has a long history of amplifying existing prejudices under the cover of war hysteria to manufacture consent for its actions.

Two weeks have passed since the start of the war in Ukraine. Peoples Dispatch has written extensively about the role of NATO, and the United States more centrally, in setting the stage for the current war in Ukraine. But despite the centrality of NATO in creating this conflict, the people of NATO countries have been bombarded with news media that places the sole blame on Russia.

The results of this constant propaganda on the people of NATO countries are apparent. In Canada, a Russian community center, with no ties to the Russian government, was vandalized with the colors of the Ukrainian flag. In Wales, the Cardiff Philharmonic banned Tchaikovsky from future performances. And in the United States, a country with an ugly history of war-related hysteria and racism, anti-Russian Sentiment has grown to Cold War levels.

A Russian restaurant was vandalized in Washington DC. Workers and owners of an upscale Russian cocktail bar in New York City, many of whom are Ukrainian, were told to “go home”. The Metropolitan Opera in New York City announced that a Russian opera singer has withdrawn from the company for “Not complying with the Met’s condition that she repudiate her public support for Vladimir Putin”, to be replaced by a Ukrainian singer. States like Ohio, Pennsylvania, Utah, New Hampshire, Oregon, and Texas are hopping on the growing bandwagon of banning Russian vodka. Meta platforms Facebook and Instagram loosened restrictions on violent speech and death threats against “Russian invaders” and Russian leaders. Russian-American workers are facing discrimination, and Russian immigrants, many of whom have been in the United States for generations, feel compelled to denounce the actions of a government they do not control.

One lesson I learned from 9/11: Don’t be intimidated into silence when it seems like everyone else is screaming with one voice for more war. What “lessons were learned” from the last two decades? Any? Stop. Think.

This massive wave of Russophobia in the United States has certain similarities to previous waves of popular hatred for those the mass media has deemed the “enemy”. Peoples Dispatch spoke to Egyptian-American musician Omnia Hegazy, who has been outspoken about the bigotry she endured as a Muslim person in Staten Island after the September 11th attacks. Hegazy, who was in sixth grade when the World Trade Center was attacked, described physically violent bullying, other Muslims she knew getting spit on and having their hijabs ripped off, and being called things like “terrorist” and “Bin Laden’s daughter” along with her twin sister.

Hegazy also described a pressure to perform patriotism in the wake of the terrorist attacks. “I would proudly be an American to make other people feel better, so that I was less threatening.” Hegazy described how her family placed a US flag on their balcony. “I know it was a show to make our neighbors feel better about us,” she said. As an adult, Hegazy now identifies as an anti-imperialist, which as she describes can be difficult due to her status as a Muslim person in the United States. “It’s really hard because I’m still expected to show that kind of patriotism, and I just don’t adhere to it any more. So people get very angry with me when I’m very critical of the American government and American imperialism. Whereas when a white non-Muslim person can says these things, and it’s not met with quite the same resistance.”

As shown by the experience of notable figures such as Anna Netrebko and Russian diaspora alike, Russians and Russian-Americans alike are now expected to denounce the actions of the Russian government and Putin. In response, pieces have been released reassuring readers about how Russian-Americans do not in fact support the actions of Putin. “How Ukrainian and Russian Americans are supporting victims of the invasion” reads one headline, another reads, “‘We Are Horrified’: Russian Americans Condemn Invasion of Ukraine”. But as Hegazy noted, there was a similar pattern in the treatment of Arab and Muslim Americans in the US post-9/11. “I remember hearing, like the talk back rhetoric, ‘Islam is a religion of peace.’ That was what Bush said to try to reassure people. I would hear that a lot as a talking point, to try to say all Muslims aren’t bad, which was a nice talking point. But it was also like, this really has to be said?”

This reassurance and defensive rejection of the “bad” elements of a given culture, like terrorism or Putin, recalls one of the most extreme moments of war hysteria in US history. After the Japanese army attacked a US naval base in Pearl Harbor during WWII, the US government rounded up over 120,000 Japanese-Americans into internment camps. Within these internment camps, many inmates took “loyalty tests”, which asked Japanese-Americans: “Will you swear unqualified allegiance to the United States of America and faithfully defend the United States from any and all attacks by foreign and domestic forces, and forswear any form of allegiance or disobedience to the Japanese Emperor, or any other foreign government, power, or organization?” Many Japanese-Americans failed the questionnaire in protest of the dire conditions of exclusion. Those who failed the tests were further segregated from other inmates, cleaving Japanese-American communities into the categories of “loyal” and “disloyal”.

Islamophobia and anti-Arab racism escalated to a massive degree post-9/11, to which Russophobic sentiment in the US has not yet reached. As Brown University found, “The total number of reported hate crime incidents in the US decreased by over 18 percent between 2000 and 2009, but during the same period, the percentage of hate crime incidents directed towards Muslims increased by over 500 percent.” One of the results of the Islamophobic hate movement was the entrance into political life of Donald Trump. He initially rose to political prominence by suggesting that Barack Obama is secretly a Muslim. The United States government terrorized Muslim communities by rounding up, detaining, and/or deporting over 1,000 Muslim people in connection with false terrorism claims.

It is yet unclear what the impact of war-mongering discourse could have on Russian communities abroad. With the war in Ukraine only a few weeks old, some similar patterns are already emerging. A Russian-American, Elena Branson, was recently accused of espionage. The media has reported on Branson, who was merely charged with acting as a spy, as if she’s already been convicted, writing, “Branson worked on behalf of the Russian government and Russian officials to advance Russian interests in the US, the complaint says.” [emphasis added] It is unclear if there will be further accusations made of Russian-Americans, and if those accusations will escalate into detention or deportation.

Russophobia: Who Does It Serve?

Media plays a key role in fomenting war-related bigotry, as does pop culture. Famous children’s author Dr. Seuss drew some of the most racist anti-Japanese imagery during WWII, and popular cartoons like Popeye featured anti-Japanese episodes.

From a historical perspective, bigotry such as Islamophobia or anti-Japanese racism did not exist in a vacuum. In fact, the overarching context is that those forms of war-related racism helped justify some of the most violent acts committed in human history: the multi-decade “War on Terror” and the catastrophic bombings of Hiroshima and Nagasaki.

Activist and journalist Morgan Artyuhkina told Peoples Dispatch, “I said something about how I think that Biden banning imports of Russian oil is going to be bad, not just because it’s going to hurt ordinary Russians the most as we know that all sanctions do, but also because it’s going to hurt American working people, too…I was basically told, ‘Why don’t you want to stand up to Putin? We need to do this to stick it to them.’ Well, that’s what people said 25 years ago, 30 years ago when they sanctioned Saddam Hussein, and 600,000 children under the age of five in Iraq were the ones who paid the price for that.”

What will present-day Russophobia serve to justify? Russia is now the most sanctioned country in the world, with not only working class Russians but also working people in the US bearing the brunt of those sanctions. Naturally, sanctions should be unpopular among all working people of the world. However, in the US, mass media urges workers to accept the “sacrifice” of the highest gas prices in US history.

You asked for a robust anti-war movement in America, you got demonstrations calling for World War 3. https://t.co/Gjk3TuUcen

The concept of direct military intervention remains unpopular among people in the United States, even post-Russian invasion. The US government is now actively trying to paint Russia and Putin and the sole villains in the Ukraine conflict and subsequent gas price hikes, obfuscating the larger context of aggressive NATO expansion. Will this, combined with the growing Russophobia promoted by media and culture, be enough to shift popular opinion in favor of war?

It’s very possible: various polls show that a majority or a plurality of people in the US support a NATO-instituted no-fly zone over Ukraine. Several protests have cropped up across the country, demanding that the US and NATO institute a no-fly zone.

A recent YouGovAmerica poll found that although most people in the US support the idea of a no-fly zone, most do not support the idea of the US military shooting down Russian aircraft, which is what it would take to enforce a no-fly zone. As FiveThirtyEight writes, “It’s possible that a no-fly zone sounds to many Americans like a happy medium between two extreme options that we know from polling are both unpopular — going to war with Russia and doing nothing — and that’s why support initially registers so high.”

And so people in the US remain both propagandized and uninformed. How do peace-loving people win the battle of ideas in this environment, against prevailing Russophobia? According to Hegazy, “the truth is that our government knows that people do have good hearts and people care about other people, so they will use that against them, to manufacture public consent for a war.”

She suggests: “if you’re demonizing Russia as evil and you’re not pointing out what the US has done, there’s just a lot of education that is missing here…I think we really have to educate our class about imperialism, because I don’t think a lot of folks even know what it is or realize that it’s still happening in the 21st century. And if they did, it would definitely change public opinion. Because once you know that you don’t ever see the world the same. There is no good versus bad anymore. It’s not that simple anymore, and I think that’s what we have to really do.”