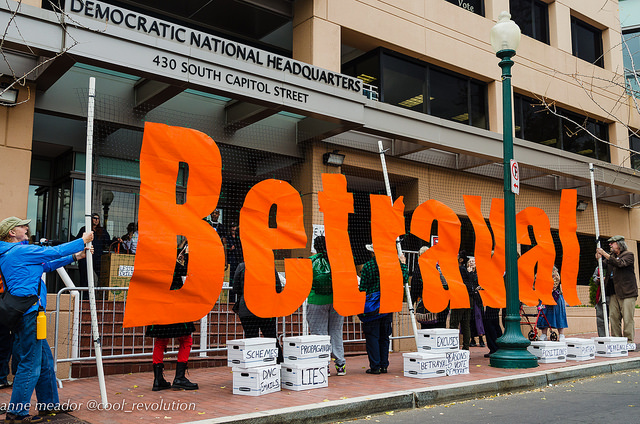 Note: The reality is the only way to ditch the establishment Democrats is to ditch the Democrats. The party has shown itself to be unreformable and a destroyer of political movements. Half the voting population has left the two parties. The movement must give them somewhere to go and that is independent politics outside of the two party system. It may seem like a shortcut to try and change the Democratic Party but every movement that has tried has found themselves changed and weakened while being absorbed into the Democratic Party, which has always been a party of big business. There is no shortcut — the movement must have its own party so its interests are represented. KZ and MF

If the last week has shown us anything, it’s that Donald Trump has power, but he doesn’t have much of a mandate yet.

We need to keep it that way – and be wary of the bad political leadership and strategy that can help him build one. November’s election is a powerful reminder that the Clinton establishment’s mix of socially inclusive rhetoric and neoliberal economics is a weak response to xenophobic populism.

An anti-Trump resistance movement must be broad, but it must direct its anger and energy not just at the enemy in the White House, but the failed leadership that let him get there. The Tea Party movement couldn’t have emerged with Bob Dole and George W Bush among their leaders. We can’t build our anti-Trump resistance, settled with generations of unpopular Democratic party leaders either.

The alternative must come from below – and certainly protests like the Women’s March are inspiring starts. Millions marched, many of whom had never attended a political protest before. It was hopefully a sign of things to come. Yet it is crucial that we know what this broad movement is for, as well as what it is against.

For years, myself and others posed a divide in the Democratic party that seemingly existed only notionally: a gap between social democratic demands at the base of the party and technocratic neoliberalism at the top of it. The Sanders campaign made that divide more real and tangible – it stirred a rabid opposition to Clintonism within millions of people, many of them politicized for the first time, and more importantly presented an alternative politics.

Now a whole generation of Sanders Democrats are engaged in a process that at its best creatively produces divisions and polarizations within the party that complements the organizing that is going on outside of it.

The broad sketches of an alternative-left politics in the Trump era are emerging. Socialists and others are doing their part building social movements organized around real, uncompromising demands for things such as free public higher education and a dignified healthcare system to expand the base for progressive politics, while using local elections (both within Democratic primaries and as independents) to spread their message far and wide.

But though he’s seemingly in disarray now, we must be wary of the ways in which Trump’s support can easily be bolstered.

We should be very afraid when the president of the Building Trades Unions umbrella group, Sean McGarvey, calls the meeting he had with Trump last week the best of his life. Our response in the labor movement must be to support rank-and-file struggles against leaders prone to conciliation for even the most meager of concessions. We must demand the same accountability from liberal organizations and the Democratic party as well.

There is no doubt that this stance will put like-minded leftists and liberals in direct confrontation with establishment Democrats and their assorted lackies.

There is every reason to believe that if confronted, this caste can be overtaken. We’re in a shocking new political era. Just in the past few months, thousands of people have joined leftwing organizations such as the Democratic Socialists of America, and millions more are trying to get active politically at the local level.

But we’ve seen time and time again – the antiwar movement of the 2000s being just the most recent example – of what happens when people subordinate all other political priorities to fighting Enemy No 1.

Trump is bad and needs to resisted, we all know that. But the Sanders left and its allies are the only force in the US that have the ideas that can win an immediate majority in this country: a class-based movement for jobs and justice. That vision must triumph over not just Trump, but the Democratic leadership.