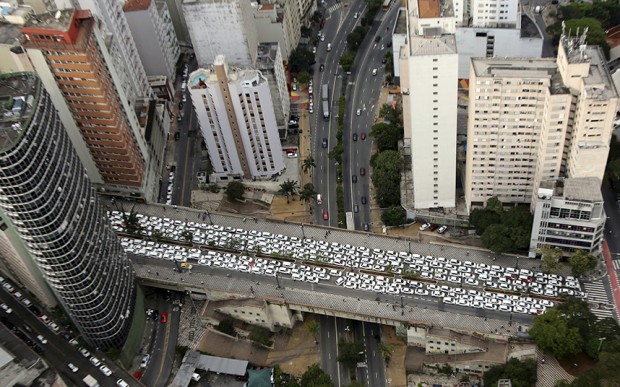 Anti-Uber Protests Around The World

Above: The streets of San Paulo, Brazil are a parking lot as taxis protest Uber. Picture: Paulo Whitaker/Reuters.

Taxi drivers from around the world have been protesting Uber which they see as unfair and unregulated competion.

London’s transport chiefs announced plans on Wednesday to tighten control on private hire vehicles (PHV), a move that could hit app-based ride-hailing firms such as Uber.

Drivers of the city’s famous black cabs have argued Uber bypasses local licensing and safety laws and amounts to unfair competition. They have staged a number of high-profile protests, including go-slow demonstrations that have brought traffic in the centre of London to a standstill.

The app has sparked protest among taxi drivers around the world. Here, Uber protesters in yellow shirts listen to city council debate over new taxi regulations in Toronto, Canada, on September 30, 2015. Toronto City council is set to vote on changes to taxi regulations that could regulate ride-hailing app service Uber.

Taxi drivers demonstrate outside the chamber of deputies in the neighborhood of Se, Sao Paulo, Brazil, on September 9, 2015, against the use of the Uber application in the country. The demonstration was called by the Brazilian association of taxi unions.

An Italian taxi driver lights a flare as he takes part in an anti-Uber protest in Rome, Italy, on September 10, 2015. Hundreds of Italian taxi drivers took to the street in Rome to protest against a law proposal in favour of UberPOP, a smartphone application-based transportation network and taxi company, which employs drivers without the special licenses normally required to drive a taxi.

Taxi drivers from all over Europe line a street during a protest against online ride-sharing company Uber, in central Brussels, Belgium, on September 16, 2015.

Striking taxi drivers block a square near the inscription ‘Down with Uber’ in Paris, France in June 2015.

Taxi driver protest against private carriers, including Uber, by blocking streets in the centre of Warsaw on September 24, 2015.

Taxis are seen parked on the street during a protest against the online car-sharing service Uber in downtown Sao Paulo, Brazil, on September 9, 2015.

Taxi drivers attend an Uber protest in Brisbane, Queensland, Australia, on September 10 2015. Demonstrators protested against the lack of regulation of the Uber ride sharing service.

Taxis block the streets of Melbourne’s central business district (CBD) during a rally against ride-sharing service UberX in Melbourne, Australia, on September 10, 2015

Taxi drivers from all over Europe line a street during a protest against online ride-sharing company Uber, in central Brussels, Belgium, on September 16, 2015