Note: Activism Update
Monday and Tuesday, April 8 and 9, are hereby declared “Get Ken and Tarak Home” days. We are asking people to concentrate calls, letters, and visits to Irish Embassies and Consulates, the State Department, and elected officials on these days so that these institutions experience a flood of support for Tarak and Ken and protest against U.S. military flights through Shannon. Letters to the editor of your local paper are also important. We should be demanding that being forced to stay in Ireland amounts to punishment before being convicted. We should stress that it is damaging to their health, their finances and their families. And, of course, that they were only arrested because they were trying to stop the illegal U.S. military flights through Shannon that bring troops and weapons through meant for illegal wars in the Middle East that have already killed up to a million children, and displaced millions of refugees.

Click on “Action Points”  for details on who to call, and click on “Talking Points” for Ed Horgan’s detailed notes about why Ireland should not be allowing the U.S. flights through Shannon. Under the “Resources” link are samples of letters to the Irish Embassy, Secretary of State Pompeo, and to local newspaper editors.

Veterans for Peace members, Tarak Kauff and Ken Mayers were arrested protesting at Shanon Air Force Base. They were held without bail until an appeal was heard in the High Court before Judge Robert Eager who granted bail, but they are still in Ireland.

They were part of a group of seven US Veterans for Peace took part in a protest against US Military Base at Shannon Airport on Sunday, March 17. Tarak and Ken were arrested at Shannon Airport on March 17 for entering the airfield to inspect and investigate an OMNI Air International plane on contract to the U.S. military. 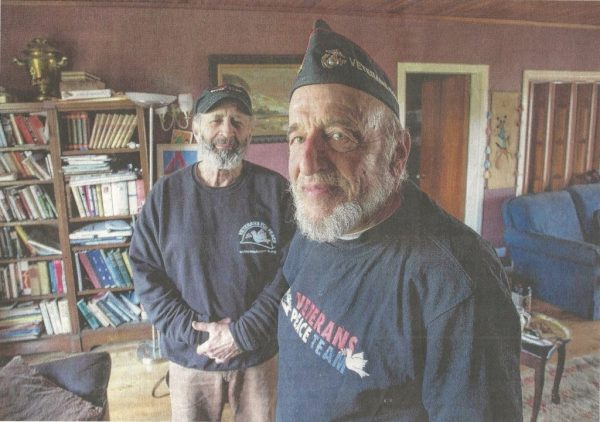 Tarak Kauff and Ken Mayer after their release. Photo published in the print edition of the Irish Times March 30.

Tomorrow, April 3, is the next hearing before a judge in the Ennis District Court, where they were twice refused bail. They will submit a motion to have the trial moved to the Circuit Court in Dublin. This will accomplish two things: It will guarantee that they get a jury trial, rather than being tried before a single judge, and it will move them out of County Clare, where Limerick Airport and the U.S. military flights are a major economic driver. 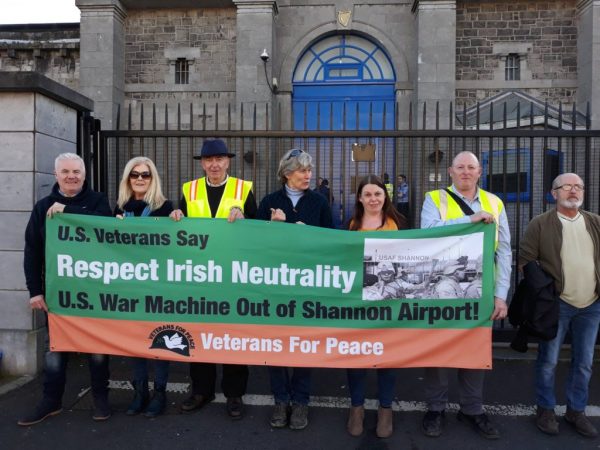 Vigil outside Limerick Prison March 27 for Tarak Kauff and Kan Mayers displaying the larger version of the banner that Ken and Tarak took onto the airfield at Shannon.

On March 30, 2018, Tarak Kauff said on Facebook, “It‘s great to be (relatively) free. Of course, as we all know, none of us are really free until we all are but your support and love have literally brought tears to my eyes. We are so grateful and inspired by all of you. Great love and solidarity. We are family. Hope to see you all soon. Keep on keeping on.”

After being released on bail, Kauff and Mayer settled in at Irish activist Sean Clinton’s home. They have access to their phones and emails and are seeing all the solidarity actions that took place on their behalf–New York, Washington (twice!), San Francisco–letters from all over, and more. They are very moved by the support that has swelled up. And they are very happy to be able to communicate directly with friends and family.

The Irish Times printed an article about their experience in prison, which failed to note why they were on the tarmac at Shannon Airport or to mention the illegal U.S. military flights at all. Several letters have been sent to correct the record. The two also spoke on John McDonagh’s show on WBAI-FM, Radio Free Eireann. John has been covering the issue in every show since the March 17 arrests, and you can find interviews with Ed Horgan, Ellen Davidson, and today’s show in the WBAI archives. 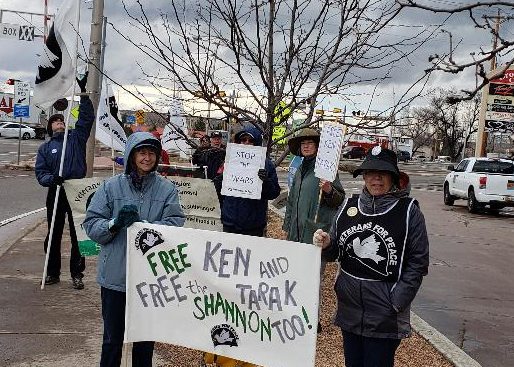 Ken and Tarak are also getting back on the streets. They attended a vigil in Limerick in support of Palestinian rights (Ken and Tarak have twice traveled to the West Bank with VFP Veterans Peace Team delegations). “We see the connection between the U.S. warplanes refueling at Shannon Airport to bring troops and munitions to wage death and destruction in the Middle East for the past 18 years and the Israeli occupation and oppression of the Palestinian people – an occupation supported and encouraged by almost four billion of US tax dollars as well as US political cover every year,” said Tarak.

Tarak spoke briefly with Ellen Davidson when they were released and said they were very glad to be out, but that they had made some good friends in the prison, among both the guards and the prisoners. “The memory of 1916 is very real to them,” said Tarak, “and both guards and prisoners encouraged us to keep protesting.”

Their passports have been confiscated and they have been told they must stay in Ireland for the trial. Their allies are organizing support for a campaign to bring them home in the next weeks. In the meantime, they will be housed and fed by great allies on the ground over in Ireland. 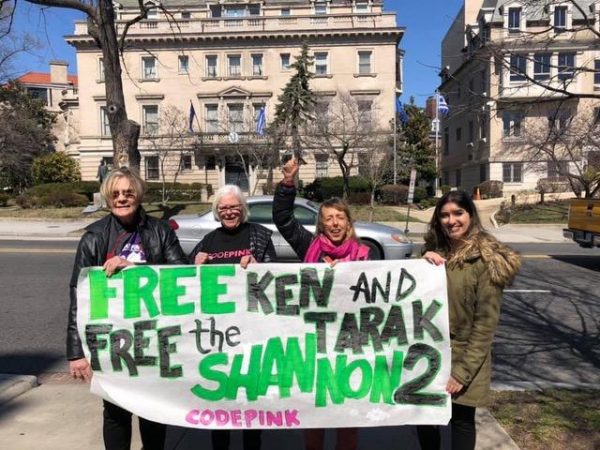 Art. 2. Belligerents are forbidden to move troops or convoys of either munitions of war or supplies across the territory of a neutral Power.

Art. 5. A neutral Power must not allow any of the acts referred to in Articles 2 to 4 to occur on its territory.

Art. 11. A neutral Power which receives on its territory troops belonging to the belligerent armies shall intern them, as far as possible, at a distance from the theatre of war.

All these articles are being breached almost daily at Shannon airport. By allowing up to three million armed belligerent US troops and large quantities of munitions and war materials to transit through Shannon airport since 2001, on their way to and from wars in the Middle East, the Irish Government has been in serious breach of international laws on neutrality. None of the aircraft transporting these US troops and war materials through Shannon has ever been searched of investigated by Irish police.

3. Torture: Shannon airport was used, and may still be being used, by CIA aircraft involved in the US extraordinary rendition program under which hundreds of individuals were kidnapped, transported to prisons where they were tortured in breach of local, national and international laws, including the UN Convention Against Torture (UNCAT), and Irish law, Criminal Justice (UN Convention Against Torture) Act 2000.

UNCAT Article 4.1. “Each State Party shall ensure that all acts of torture are offences under its criminal law. The same shall apply to an attempt to commit torture and to an act by any person which constitutes complicity or participation in torture.”

Since Ireland as a neutral state is not a belligerent in these wars, Ireland’s responsibility in these serious matters applies primarily to its facilitation of the US military through Shannon airport. We do not facilitate Russian, or Iranian, or Syrian or Iraqi, or even British forces in a similar manner. Irish citizens therefore bear a proportionate part of the responsibility for any war crimes committed by US forces in the Middle East.

5. Nuremberg Principles: Principle VI “The crimes hereinafter set out are punishable as crimes under international law: (a) Crimes against peace: (i) Planning, preparation, initiation or waging of a war of aggression or a war in violation of international treaties, agreements or assurances;(ii) Participation in a common plan or conspiracy for the accomplishment of any of the acts mentioned under (i).”

(Note: Ireland is guilty especially under Nuremberg Principle V11, Complicity in the commission of crimes against peace by the US Government and US military forces in the Middle East.

6. Irish criminal laws: All Irish Criminal laws, without exception, apply at Shannon airport, including laws prohibiting torture, murder, criminal assault, conspiring to pervert the course of justice, and in most cases include facilitating the commission of such crimes by others, regardless of whether such crimes are committed on Irish territory or not.

8. Obligations and duties of An Garda Siochana (Irish Police Force)

Garda Siochana Act 2005
Section 7.(1) The function of the Garda Síochána is to provide policing and security services for the State with the objective of—(a) preserving peace and public order, (b) protecting life and property, (c) vindicating the human rights of each individual, (d) protecting the security of the State, (e) preventing crime, (f) bringing criminals to justice, including by detecting and investigating crime, and (g) regulating and controlling road traffic and improving road safety.

Section 16. Garda Oath (1) On being appointed, each member of the Garda Síochána shall make before a Peace Commissioner a declaration in the following form:
“I hereby solemnly and sincerely declare before God that—

• I will faithfully discharge the duties of a member of the Garda Síochána with fairness, integrity, regard for human rights, diligence and impartiality, upholding the Constitution and the laws and according equal respect to all people,

• while I continue to be a member, I will to the best of my skill and knowledge discharge all my duties according to law, and

• I do not belong to, and will not while I remain a member form, belong to or subscribe to, any political party or secret society whatsoever.”

9. Obligations of Irish citizens and non-citizens.

These obligations include assisting police and emergency services where necessary in the prevention of serious crimes and in preventing serious injuries to other persons, including persons who may be subject to serious injuries or death outside the jurisdiction of the Irish State.
In addition there are moral and humanitarian duties that are applicable to all members of humanity that oblige all of us to take all reasonable means to prevent serious crimes, especially crimes against humanity. We must all act in accordance with our CONSCIENCE to prevent wrongdoing.

It is not sufficient to stand idly by while such crimes are being committed.