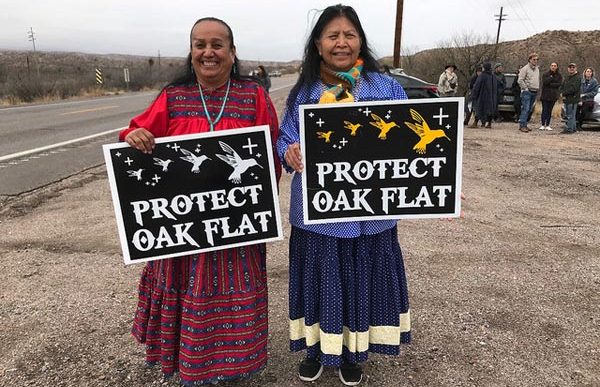 Apache Stronghold, on behalf of traditional Apache religious and cultural leaders, placed a lien on Oak Flat on Wednesday, January 13, with the Pinal County Recorder’s Office.  The lien prevents the planned transfer of Oak Flat, or Chi’chil Bildagoteel, to a foreign mining company until the recently filed ongoing Apache Stronghold lawsuit is finalized.

The lien and one of the lawsuit claims are based on the Treaty of Santa Fe of 1852 between the United States and the Apache which promises that Apache lands, at the center of which lies Chi’chil Bildagoteel, are to remain in Apache ownership.  The Treaty of Santa Fe is still in force.

“What was once done with gunpowder and disease is now achieved with legislative and bureaucratic wrongdoing and mythology about the past that treats Native people as if we are invisible or don’t exist.” said former San Carlos Apache Tribal Chairman and Apache Stronghold leader Dr. Wendsler Nosie, Sr.

“The January 15, publication of the FEIS triggers the Forest Service ability to transfer Oak Flat to the mining company,” said Apache Stronghold attorney Michael Nixon. “But the lien is like a giant Apache shield over Oak Flat, protecting it for the life of the case.  Oak Flat is Apache Holy Land.  The U.S. has no legal right to give it away.”

Apache Stronghold lawsuit’s claims also include violation of the Religious Freedom Act and constitutional rights to religious freedom, due process, petition and remedy, and breach of trust and fiduciary duties.

The foreign mining company, Resolution Copper, which is owned by Rio Tinto and BHP, admits that they will turn Oak Flat into a crater of rubble 1,100 feet deep and 2 miles wide.

The hearing for the injunction is set for January 27, 2021 via Zoom.  Federal Judge Steven P. Logan has not yet decided if the public will be allowed to attend.  After Judge Logan ordered an injunction hearing, the Forest Service agreed to halt the land transfer for 55 days.