Apartheid In Detroit: Water For Corporations, Not For People

Bill and Hillary Clinton were up to their ears in more than $10 million worth of legal debt at the end of Clinton’s tenure as president. Donald Trump was bailed out of four bankruptcies. But Detroit residents are having a basic human right – the access to water – cancelled for being late on bills of $150.

In the spring, Detroit’s Emergency Manager Kevyn Orr ordered water shutoffs for 150,000 Detroit residents late on their bills. Orr is an unelected bureaucrat accountable only to Michigan Gov. Rick Snyder, who appointed Orr and several other “emergency managers” in largely poor, black communities like Detroit, Benton Harbor, Flint, and Highland Park, to make all financial decisions on behalf of local elected governments.

Orr’s plan will shut off water for 1,500 to 3,000 Detroit residents each week. Neither Orr nor Homrich, the contracting company Orr hired to shut off residents’ water, answered calls for interview requests.

Detroit citizens have been protesting the decision on the basis that water is a human right that cannot be denied to families who need it for cooking, bathing and flushing toilets. Many residents facing water shutoffs are currently on monthly payment plans with the Detroit Water and Sewerage Department (DWSD), paying upwards of $160 per month as water rates continue to rise, and were given no prior notice that their water was about to be cut off. Last week, the Detroit City Council held a public hearing to discuss a proposed 4 percent hike in water rates.

“The families I’ve talked to in my neighborhood and others around the city are confused about why they’re being hit (in this way),” community activist Russ Bellant told the Michigan Citizen. “Some knew they were behind, but thought they’d have time to pay it. These are people who mow the lawn on the vacant lots next door (to them).”

As the Michigan Citizen reported, residents with delinquent water bills are losing their water while prominent Detroit corporations with much larger delinquent water bills are being left alone. The Palmer Park Golf Club owes $200,000. Joe Louis Arena, home of the Detroit Red Wings, owes DWSD $80,000. Ford Field owes $55,000. Kevyn Orr is arguing that the shutoffs are necessary to pay for the DWSD infrastructure – yet when Detroit raised $1 billion in bonds to pay for new infrastructure, $537 million of it went to banks like JPMorgan Chase, UBS and Morgan Stanley to pay off interest instead.

Community activists are placing blame on the structural, institutionalized poverty in Detroit that forces the people to foot the bill for corporate mismanagement. Detroit’s bankruptcy and urban blight is a direct result of the housing bubble that burst, putting over 60,000 homes in foreclosure and rendering thousands of families homeless.

Dan Gilbert, the billionaire owner of Quicken Loans who is financing much of the gentrified development of downtown Detroit, has been particularly blamed for his company’s role in exacerbating the foreclosure crisis through its intimidation of homeowners, pressuring them into risky subprime lending schemes.

“Instead of going after the corporate institutions who owe millions, they’d rather turn off the water for poor people,” said Demeeko Williams, an organizer with Detroiters Resisting Emergency Management. 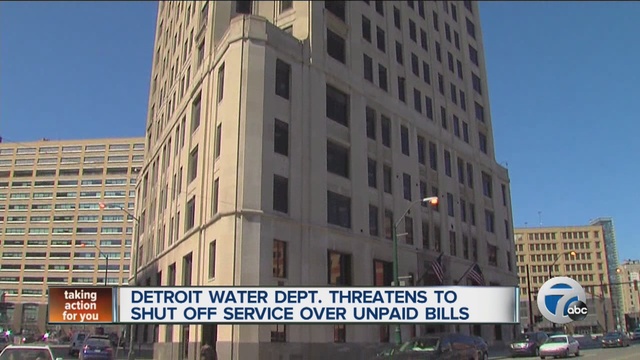 To fight back, Williams and other community activist groups like Moratorium NOW! and the Detroit After Party are teaming up to create the Detroit Water Brigade, a mutual aid effort aimed at providing residents with water and stopping water shutoffs with nonviolent direct action. The Detroit Water Brigade has set up a bridal registry on Amazon.com inviting those interested to help purchase necessary supplies like water coolers, cases of bottled water, heavy-duty contractor bags, and orange safety vests.

Some of the more radical direct actions being promoted by the Detroit Water Brigade include distributing flyers instructing people on how to turn their own water back on after it’s been shut off, and how to pre-emptively stop contractors from shutting water for their home. The flyer reads:

“Step 1: If your water is off, have the neighborhood water person or a friend (not you) obtain a water key and turn it back on 1st. (If you expect your water to be turned off, go to step 2.)

“Step 4: Add water to top off. Don’t use rocks because rocks can be sucked out.”

The Detroit Water Brigade is also meeting regularly to train interested residents in nonviolent civil disobedience. Residents are planning to form human chains putting themselves between water lockboxes and contractors hired to shut off water. The water brigade is counting on Detroit’s understaffed police department to not have the resources to arrest and jail everyone participating in the water shutoff demonstrations.

In response to sustained protests from Detroit residents, the DWSD has removed the “Water Shut Off” decals from its trucks.