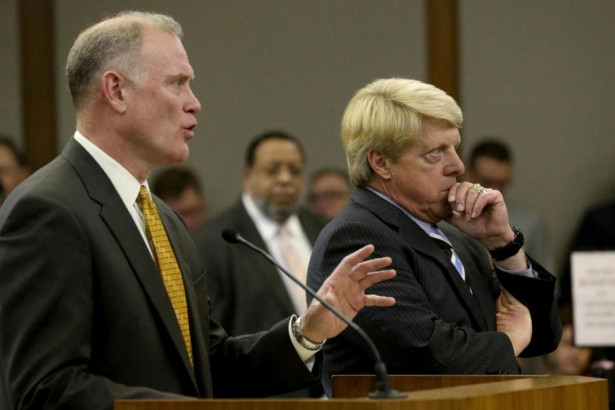 Above Photo: This Monday Feb. 2, 2015 photo shows vice president and general manager of Southern pipeline operations for Dominion Energy, Daniel A. Weekley, left, as he speaks in support of a bill dealing with utility rates presented by Sen. Frank W. Wagner, R-VA Beach, right, to the Senate Commerce and Labor committee inside the General Assembly Building in Richmond, Va. Remarks from Weekley suggest developers of the proposed Atlantic Coast Pipeline are looking at the possibility of a major expansion of the project into South Carolina. (Bob Brown/Richmond Times-Dispatch via AP) The Associated Press

Remarks from a senior energy company executive and interviews with others in the industry suggest developers are looking to expand a major East Coast pipeline into South Carolina.

RICHMOND, Va. (AP) — The developers of a disputed natural gas pipeline on the U.S. East Coast are considering a major expansion of the project into South Carolina, according to remarks made by an energy company executive and interviews with others in the industry.

Opponents of the Atlantic Coast Pipeline said that raises questions about whether Dominion Energy, the project’s lead developer, has withheld important information from the public and whether the pipeline is even needed as initially proposed. But business leaders say the pipeline would help lower energy costs and boost economic development in South Carolina.

Dan Weekley, Dominion Energy’s vice president and general manager of Southern pipeline operations, told attendees at a recent energy conference “everybody knows” the Atlantic Coast Pipeline — currently slated to pass through Virginia, West Virginia and North Carolina — is not going to stop there, despite what the current plans say.

“We could bring in almost a billion cubic feet (28 million cubic meters) a day into South Carolina,” Weekley said, according to an audio recording The Associated Press obtained from a conference attendee. The attendee requested anonymity out of concern for not wanting to harm business or personal relationships.

The remarks appear to be the Richmond, Virginia-based company’s most direct public signal to date that it intends to expand the pipeline, though industry analysts said the potential has been discussed for years.

“It just fits into the whole idea that we’ve never really believed that Dominion is telling us the whole truth about the project and the gas and where the gas might go,” said David Sligh, conservation director of Wild Virginia, a nonprofit dedicated to preserving Virginia’s national forests.

“Is the real intent to move most of the gas into South Carolina?” Buppert asked.

Tamara Young-Allen, a spokeswoman for the commission, said if the developers want to expand the pipeline into another state, they will have to go through the full application process again.

Dominion spokeswoman Jen Kostyniuk said “absolutely no decision has been made about a potential expansion” of the pipeline.

“Even though it dead-ends at Lumberton (North Carolina) — of course, 12 miles (19 kilometers) to the border — everybody knows it’s not going to end in Lumberton,” he said.

Weekley said the pipeline could go toward the coast or into the mid-state region of South Carolina, depending on power needs. “You tell me, we’ll turn one way or the other,” said Weekley, who wasn’t available for an interview, according to pipeline spokesman Aaron Ruby.

As initially proposed, the approximately $5 billion pipeline is a huge infrastructure project that’s been enthusiastically endorsed by business and political leaders but sparked strong opposition from environmental groups and many landowners in its path. With sections up to 42 inches (107 cm) in diameter, it would start in West Virginia, cross through the heart of Virginia — including national forest, the Blue Ridge Parkway and the Appalachian Trail — then bend through eastern North Carolina. Most of the 1.5 billion cubic feet (42.5 million cubic meters) of natural gas it could transport each day would be used to generate electricity in Virginia and North Carolina.

Analyst Shar Pourreza, managing director and head of North American power for Guggenheim Securities, said he expects that the pipeline will eventually be expanded as far into the southeast as Georgia or Florida, in part because the closures of coal-fired power plants are increasing the demand for natural gas.

Natural gas, which is cleaner than coal, has been embraced by politicians from both parties and touted as a bridge fuel toward greater use of renewable energy. Pipelines are also lucrative projects — developers can frequently recoup around a 14 percent rate of return.

“If we want more industrial development, we’re going to need the kind of infrastructure that Dominion can bring to the state,” said Lewis F. Gossett, President and CEO of the manufacturing alliance. “The pipeline is essential.”

But environmentalists and others are increasingly questioning the need for more natural gas infrastructure.

“It depends on whose economics you believe, I guess,” said Lew Freeman, Executive Director of the Allegheny-Blue Ridge Alliance, a coalition of groups that oppose the pipeline.

The federal regulatory commission issued an environmental review over the summer that was largely favorable for developers, and is widely expected to grant a certificate needed for the project to proceed this fall.