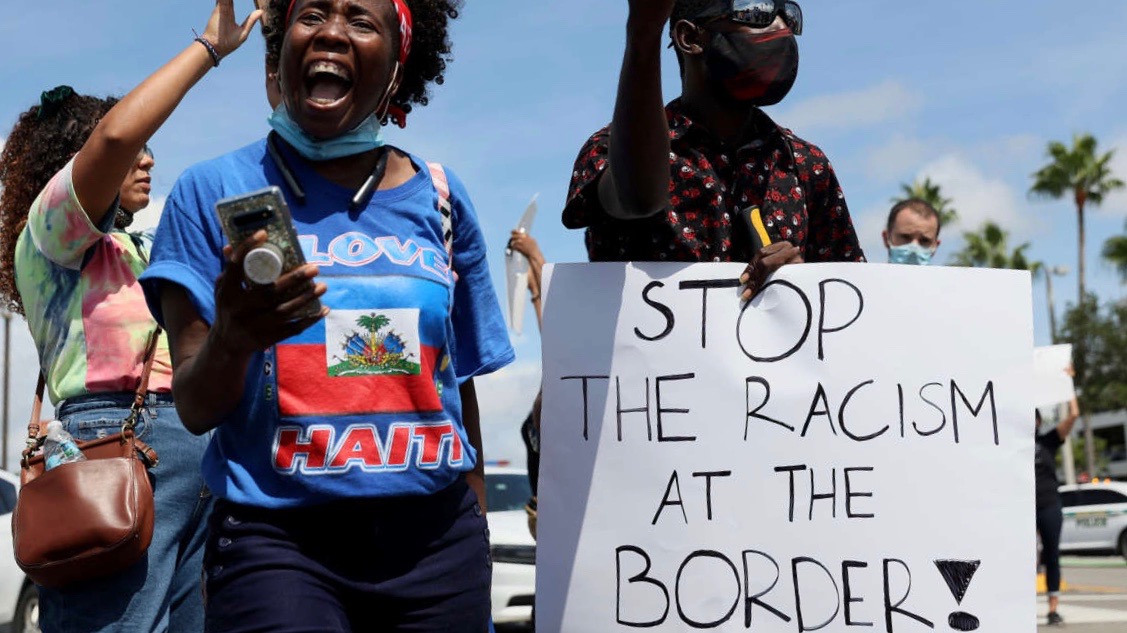 Above Photo: Protest on September 22 against the mass deportation of Haitian refugees in Del Rio, Texas. Joe Raedle/Getty Images via TruthOut.

Ruling on an appeal filed by the Joe Biden administration, the federal appeals court blocked a US district judge’s decision to prevent deportation of families under Title 42.

In a setback to migrant rights advocates in the United States, a federal appeal court has allowed the forcible expulsion of apprehended undocumented migrant families to continue. The ruling was passed by the US Court of Appeals for the DC Circuit on Thursday, September 30. It was a last minute ruling which blocked a prior ruling by a federal judge against the expulsions before it went into effect.

Thursday’s ruling was in response to the appeals filed by the administration of president Joe Biden against the order by district judge Emmet Sullivan of the US District Court for DC (District of Columbia) on September 16. The district judge’s order was stayed as a case against the current immigration policy is ongoing.

In a petition by the American Civil Liberties Union (ACLU), judge Sullivan had found that Title 42, a controversial order passed under the presidency of Donald Trump during the COVID-19 pandemic, had no legal basis and argued that it deprives families the “opportunity to seek humanitarian benefits” as provided under the immigration laws.

The district judge passed an order to block the use of Title 42 for the expulsion of migrant families on the US-Texas border, beginning from Thursday. But with the appeals court ruling, the federal government can be assured of several more months of no judicial intervention on the matter, while the case against Title 42 continues in the federal court.

Title 42 was passed in March 2020 by president Trump through the Centers for Disease Control and Prevention (CDC) as a measure to supposedly curb the spread of COVID-19 infections through undocumented migrants.

Despite the lack of substantial evidence to support claims that the influx of asylum seekers has contributed to the spread of COVID-19, the Biden administration repeated the Trump-era argument in its appeal against the district judge’s order.

The ACLU expressed its disappointment with the appeals court ruling. “We are disappointed in the ruling but it is just an initial step in the appellate litigation, and nothing stops the Biden administration from immediately repealing this horrific Trump-era policy,” Lee Gelernt, a lawyer for the ACLU, said in a statement.

The ruling comes close on the heels of the violent deportation of around 15,000 Haitian refugees in a migrant camp from the border town of Del Rio in the southern State of Texas. The entire camp was cleared by the border forces in days, with thousands already deported either to Mexico or back to the highly precarious conditions in Haiti.

Since the incident at Del Rio, the Biden administration came under heavy criticism over its record on asylum-seekers and immigration so far. Migrant rights advocates have particularly called out president Biden for not only going back on his campaign promise to reverse Trump’s immigration policies, but also for using and defending the same immigration orders which exploited the COVID-19 pandemic to crack down on asylum seekers.

“If the Biden administration really wants to treat asylum seekers humanely, it should end this lawless policy now and withdraw its appeal,” Gelernt said in his statement. He added that the ACLU will continue the fight against these policies.

Meanwhile, under pressure from rights advocates and progressives movements, the Biden administration is currently reviewing the existing immigration policy and planning a more humane implementation.

The latest in such attempts came on Wednesday, when the US Department of Homeland Security issued a memorandum in a second attempt to end the Trump-era Migrant Protection Protocol, also called the “Remain in Mexico” policy, barely a month after losing a court battle against it in the conservatives-dominated Supreme Court.