The move by Halte à l’Obsolescence Programmée (HOP – Stop Planned Obsolescence), an environmental association, comes after lawsuits were launched this week in the US against Apple for similar reasons.

The suit was filed on Wednesday in the Paris prosecutor’s office, HOP said in a statement.

“Apple has put in place a global strategy of programmed obsolescence in order to boost its sales” of new iPhones, the group said.

HOP believes that the US firm can be sued over the sale of all iPhones in France since the introduction of a law in August 2015 that made it a crime to “deliberately reduce the lifespan of a product to increase the rate of replacement.”

It believes Apple could be liable for a fine in line with the value of all its iPhone French sales since the law came into force.

The suit will be heard in a criminal court if prosecutors decide it is legitimate.

The maximum penalty is a prison sentence of two years, a fine of up to 300,000 euros, and five percent of the firm’s annual turnover.

“Everything is organised for force consumers to renew their smartphones,” said Laetitia Vasseur, the co-founder of HOP.

“However, when the phone is priced at 1,200 euros, which is more than the SMIC (the minimum monthly wage in France), these practices are unacceptable and must be punished.”

“It is our mission to defend consumers and the environment against this waste organised by Apple,” she said

Apple France did not respond when asked for comment on the lawsuit by The Local. 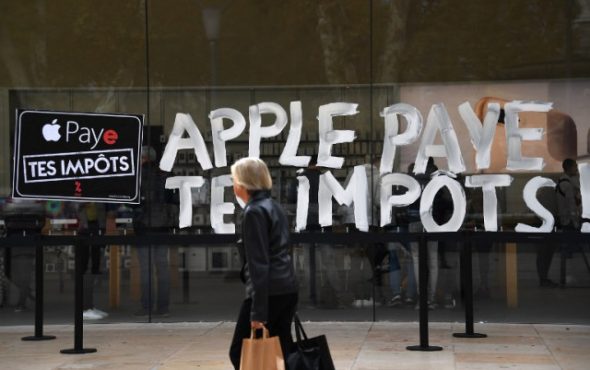 An Apple Store in France tagged by protestors with the words “Apple pay your taxes”. Photo: AFP

HOP is currently suing Japanese printer maker Epson over the firm’s alleged policy of deliberately limiting the lifespan of their machines. The Epson suit, currently working its way through the legal system, was the the first such case to be taken in France against a company accused of the crime of planned obsolescence.
French prosecutors on Thursday confirmed that they have launched a probe into Epson for alleged planned obsolescence in its products.
“For the first time in France and to our knowledge in the world, judicial authorities of a country have taken up a case of planned obsolescence,” HOP lawyer Emile Meunier told AFP news agency.
Several lawsuits have been filed in the United States alleging that Apple defrauded iPhone users by slowing devices without warning to compensate for poor battery performance.

A similar case has been lodged in an Israeli court, according to the newspaper Haaretz.

Apple said last week that operating system updates for the iPhone 6, iPhone 6s, iPhoneSE and iPhone 7 include a feature to reduce power demands as a precautionary move to stop them from shutting down unexpectedly.

The lawsuits launched in several different US states are seeking an unspecified amount in damages from Apple, as well as reimbursement for the iPhones in some cases.