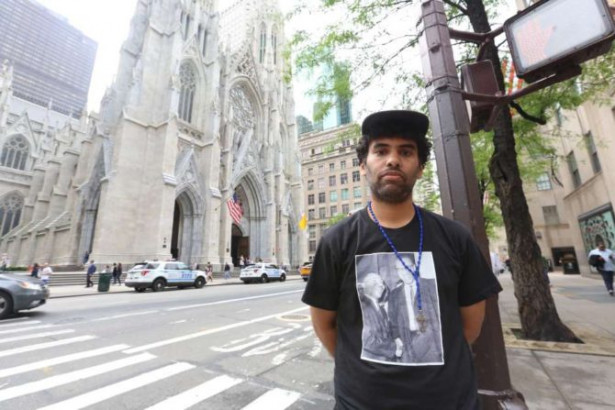 Archdiocese Defends Work With Immigrants In Response To Hunger Strike

Above Photo: Félix Cepeda at the start of his hunger strike. (Photo by Mariela Lombard via El Diario)

After activist Félix Cepeda staged a hunger strike denouncing the Catholic Church for not opening its New York houses of worship as “sanctuaries” for immigrants, Executive Director of Catholic Charities Kevin Sullivan responded that the Archdiocese’s parishes, schools and organizations have welcomed immigrants to the Big Apple for more than 200 years.

Last Friday, Cepeda conducted a 24-hour hunger strike in front of Saint Patrick’s Cathedral in Manhattan, and this Tuesday he repeated his fast, this time outside Cardinal Timothy Dolan’s house.

“Catholic Charities has been at the forefront of this welcoming – protecting and integrating immigrants and refugees in their new homes. The regrettable and inacceptable rhetoric and actions of the past months have compelled Catholic Charities to intensify its efforts to ensure that immigrants and refugees get the support, guidance and protection that they need now more than ever,” said Sullivan.

The monsignor added that the services they provide include legal representation, English classes, job safety training and information on civil rights, as well as help funding proper documents.

As he received the Catholic Charities response, Cepeda said he supports the work the Archdiocese has  done in favor of immigrants. However, he pointed out that they have not yet responded directly to his petition of using the churches as “sanctuary.”  (…)

Sullivan stressed that they have “intensified services to ensure that immigrants and refugees know that they have a defender, protector, and devout ally in Catholic Charities and the New York Archdiocese.”

‘Their own church does not protect them’

Félix Cepeda started a hunger strike in front of Manhattan’s St. Patrick’s Cathedral on May 26, to urge the Archdiocese of New York to open its churches for immigrants facing deportation orders as they wait for their cases to be resolved.

Born in the Bronx of parents who immigrated from the Dominican Republic, Cepeda sent a letter last month to Cardinal Timothy Dolan explaining his request, but the main representative of the Catholic Church in New York has not responded.

“It’s about time for the Catholic Church in New York to declare one of its churches a sanctuary so all of us can protect the immigrants,” said the practicing Catholic and social justice activist, who donned a blue rosary and a T-shirt with the images of Martin Luther King and Malcolm X, both religious and civil rights activists.

Around 11 individuals are being sheltered in “sanctuary” churches in New York, but none of them are Catholic, said Cepeda. According to the Pew Research Center, 35 percent of the city’s Catholic community are Hispanic.

“There are Catholic immigrants who have had to go to Protestant churches or Jewish temples because their own church does not protect them,” said Cepeda, sitting on the cathedral’s steps.

The interfaith, pro-immigrant network New Sanctuary Coalition supports Cepeda’s demands. “It is wrong when a church is not protecting its own congregation,” said the group’s director in New York, Ravi Ragbir, who stressed that the immigrants most at risk of being deported are Catholics from Central America.

Ragbir added that Cepeda’s stance will help “families to remain united” and Catholic immigrants to “live in dignity with the church’s help.”

Cepeda got the support via Facebook Live of Jeanette Vizguerra, the Peruvian immigrant who took refuge for six months in a Denver, Colorado, church. Vizguerra, who left the church days ago after getting a reprieve from the immigration authorities, said: “As comrades, no matter what our situation is, we must support and send solidarity messages to Félix.”